Gantz: We won’t agree to be under constant threat

By YAAKOV KATZ, MELANIE LIDMAN
Mourners hold candles at Remembrance Day ceremony 150
(photo credit: Marc Israel Sellem)
Advertisement
The State of Israel will not agree to live under constant threats like those emerging from the ongoing upheaval in the Middle East, IDF Chief of Staff Lt.-Gen. Benny Gantz declared Tuesday night during the official state Remembrance Day ceremony at the Western Wall.Gantz spoke just minutes after sirens sounded throughout the country at 8 p.m. and people bowed their heads to mourn the 22,993 soldiers who have fallen in defense of Israel since 1860 – the year the first Jews left Jerusalem’s Old City walls to settle other parts of the country.In the past year, 126 soldiers and security personnel died in service of the state. On Wednesday, the main memorial will take place at Jerusalem’s Mount Herzl Military Cemetery.A two-minute siren will sound at 11 a.m., and ceremonies will take place at an additional 44 cemeteries around the country.The Defense Ministry said it expects over 1.5 million people to visit the cemeteries throughout the day.

Click for special JPost features
“After the fog of the revolutions began to settle, we began to see a different Middle East presenting new challenges,” Gantz said. “In this new, dubious reality, we witness attempts by our enemies, both far and near, to harm everything we’ve built.”He used his speech also to stress the importance of serving in the IDF.“We have an obligation to overcome the social gaps, to stand united and to serve in the military. Only this way will we be prepared for every challenge,” he said.President Shimon Peres, who spoke just before Gantz, tried to comfort the bereaved families and said that the country’s amazing achievements were the results of their personal sacrifices. 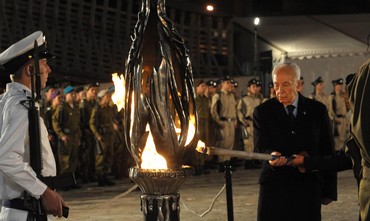 “Your sons and daughters will not return to you... Their bravery has left us alive, but their deaths have left us broken,” he said.Earlier, Prime Minister Binyamin Netanyahu addressed more than 200 soldiers and bereaved families gathered Tuesday for the Yad LeBanim Memorial for the Fallen in Israel’s Wars.“For bereaved families, time stops when you get the terrible news... it cuts your life in two: what was before, and what will never be again,” he said. “When you hear the siren tonight, we will turn into one family, and the citizens of Israel will be united in our remembrance.” 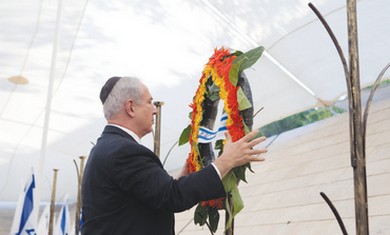 Joining him at the ceremony were chief rabbis Yona Metzger and Shlomo Amar, as well as Knesset Speaker Reuven Rivlin and representatives of the police, army and Home Front Command.Yad LeBanim (“A Memorial for the Sons”) is the organization that supports bereaved families in cooperation with the Defense Ministry and official government bodies. The Jerusalem memorial, located near the government quarter, is the central memorial for soldiers killed in action in the capital.Netanyahu spoke to the bereaved families as “my sisters and brothers,” drawing on his own experience of losing his brother Yonatan in the 1976 Entebbe rescue mission.Nava Cohen, who lost her brother in the Yom Kippur War and her son in Hebron during the second intifada, spoke on behalf of the bereaved families.“We are always looking for more parts of our son,” she said. “We’re always trying to gather another sentence, another memory, another photograph, so that we can continue to live with our son.”Cohen said the hardest part was following the chain of photographs – from childhood through school and bike trips and finally to the soldier in uniform – until the photos stop abruptly.“Today, memorial day, is a day when all of Israel is united in the remembrance of these soldiers,” she said.“Every story, from every soldier, is a story of his life and also a story of the nation of Israel.”She also pleaded with the Defense Ministry not to combine the branch that supports bereaved families with other government ministries, where it could be overlooked.The prime minister will speak at both the official Wednesday morning ceremony for the fallen, and the state ceremony for the victims of terrorism in Israel and abroad.
Advertisement
Subscribe for our daily newsletter