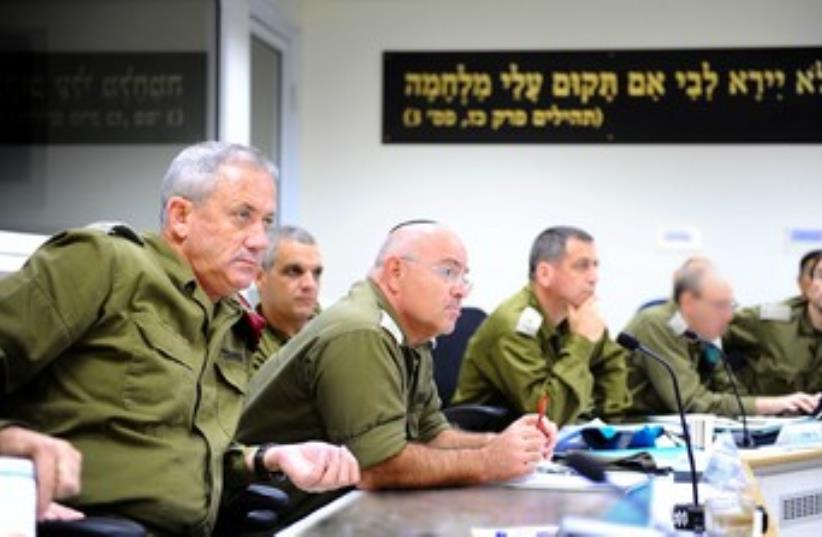 Operation Pillar meeting 370
(photo credit: Courtesy IDF)
Advertisement
The Military Advocate-General’s Office has rejected opening a criminal investigation into any of the 65 incidents from November’s Operation Pillar of Defense that it has reviewed to date.There were approximately another 15 cases still being reviewed, with no official responses by human rights group to date, the MAG’s report, released late on Thursday, added.MAG head Maj.-Gen. Danny Efroni made the decisions not to open criminal investigations based on recommendations from the MAG’s special operational legal division for investigating war crimes allegations.The decisions were also based on the recommendations of a committee of senior battle commanders led by Maj.-Gen. Noam Tivon, Col. (res.). Former head of the IDF international law department, Col. (res.) Liron Libman said that from the fact that the report was submitted in so close proximity to February 6, 2013, when the Turkel Commission's second report (Turkel II) was published and from a reference to Turkel II's recommendations still being reviewed, the investigations "probably had not been able to incorporate Turkel's recommendations."    On the other hand, one of Turkel II’s recommendations was to speed up the review and decision-making process regarding incidents, which Libman said was clearly done here, with most of the decisions being publicized only about six months after November’s Operation Pillar of Defense aerial campaign against terrorists in the Gaza Strip.The reasons for not opening criminal investigations varied widely.For example, in one of the more well-known incidents, 12 members of the Dalu family were killed by an air attack intended to kill Hamas’s rocket attacks commander, Yehiya Revia, according to media reports.None of the members of the family were participating in hostilities except possibly one, Muhammad al-Dalu, although the report made no reference to him or to having hit a terrorist, leaving the issue unsettled.Although originally the IDF maintained it had killed a major terrorist target, the report appears to admit indirectly in another section that only civilians were killed.The report states, however, that the intelligence citing that a major terrorist was present and that civilians were not, while mistaken, was gathered following procedures meant to minimize civilian casualties or at least did not depart from procedure in such a way that could possibly implicate any of the IDF soldiers in a crime.The document also noted that the commanders who gave the order to hit the target, based on the available intelligence, did not expect civilian casualties and had, in accordance with IDF guidelines, ordered the use of a munition that would reduce the likelihood of collateral damage.The statement did not describe the nature of the mistaken intelligence, nor did it describe the munition that was used and what other munitions could have been used or were under consideration.Asked for more specific responses and to clarify some of the ambiguous issues, the IDF Spokesman’s Office did not respond by press time.Regarding what he said was a much faster completion of the investigations, Libman credited the faster pace to there being not only the operational and legal investigations, but also a currently serving and much higher-ranked officer, Maj.- Gen. Nivon, overseeing the investigative process.“Rank is a big deal in the IDF,” and makes most things go faster, he added.Still, he said, some of the speed of investigations could be attributed to the fact that the operation was “more of an air war” than January 2009’s Operation Cast Lead, which was a much more “complicated ground operation.”Regarding some of the vague discussions of IDF mistakes (the army did acknowledge, without specifying, some incidents where civilians were misidentified as terrorists) or incidents where civilians were killed, Libman said he would not be surprised if some of the complainants involved might be provided additional specifics.Libman acknowledged that the MAG’s response in portions was “very general,” and the dilemma of maintaining intelligence secrecy while trying to reveal enough to the public to promote the legitimacy of the investigations.From his military experience, Libman noted that waging war in Gaza posed some of the greatest possible intelligence challenges, which could lead to mistakes, no matter the precautions, as it was an “urban environment where fighters intentionally mix in with civilians,” and some objects could “look like rockets,” but turn out not to be.He said that the situations also were often “very dynamic, with no civilians in a spot one moment, and then minutes later unexpectedly civilians arrive.”There is considerable debate between the IDF and human rights groups about fulfilling the proportionality principle in the civilian urban context, and how much blame to place on Israel versus Hamas for civilian deaths.War crimes allegations for some highly reported air strikes on media facilities are still being reviewed along with the 15 remaining cases, the MAG report said.Human rights groups, which have criticized Israel before alleging war crimes, were contacted regarding the report, but they were all still reviewing the findings and said they needed more time before they could respond.