By SHARON UDASIN
Poison dart frogs 370
(photo credit: Courtesy Nature and Parks Authority)
Advertisement
Customs officials at Ben-Gurion Airport caught a man allegedly attempting to smuggle about 30 poisonous frogs into the country on Thursday morning, the Israel Nature and Parks Authority (INPA) and Tax Authority reported.After receiving information about a passenger attempting to smuggle in marine life, inspectors from the airport’s customs zone caught the first suspect on his return to Israel from an Amsterdam flight, the authorities said. A quick look at his flight itinerary, however, revealed that two other passengers had flown with him, and the inspectors immediately identified both the suspect and one of his companions, according to the authorities.A thorough search of their possessions revealed a number of boxes containing about 30 poisonous frogs, intended for sale to Israeli collectors at between 50 and 120 euros apiece, the officials said.Following an INPA investigation, officials determined that these were a type of poisonous dart frog that was not native to the country.The proliferation of such frogs here could cause great ecological damage if they were to reach the country’s water basins, and create great biological imbalance among dozens of aquatic animals, including protected species, the INPA noted. 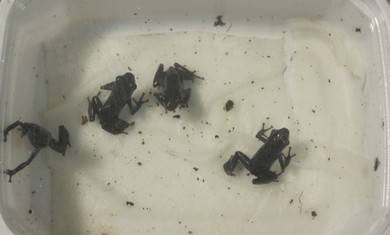 “There is a real danger to Israeli amphibians as a result of the entry into Israel of exotic species, and therefore, the INPA does not endorse the import of amphibians into Israel,” a statement from the authority said.All of the frogs were captured and transferred for further INPA treatment, and the two identified suspects are under investigation.The INPA and Tax Authority stressed the importance of two government bodies working seamlessly together to decisively address an illegal trade in animals. The INPA reported the offense to Interpol, which has an international working group operating to prevent such trade.