By MICHAEL OMER-MAN, MELANIE LIDMAN
JULY 22, 2012 00:12
Social justice protest vigil for Moshe Silman in TA 370
(photo credit: Michael Omer-Man)
Advertisement
Police arrested a social protester at a Tel Aviv solidarity protest on Saturday night, as several hundred demonstrators broke through a police line and headed toward the Ayalon freeway. Demonstrators tried to block the police van in which the arrested person, a Beduin-Israeli, was being taken away, but failed. Additional police forces blocked the protesters' path onto to the freeway and closed Ayalon to traffic. 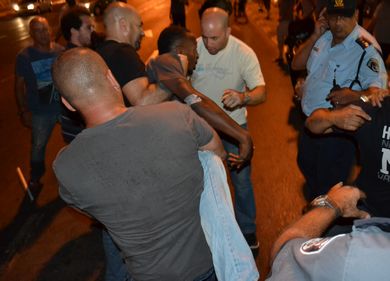 Police arrest Beduin-Israeli social justice activist in TA (Photo: Michael Omer-Man) Solidarity protests and vigils were held throughout the country Saturday night in memory of the late Moshe Silman who set himself on fire last week during a social justice protest. Silman succumbed to his wounds on Friday at Sheba Medical Center in Tel Hashomer where doctors were treating him for burns over the majority of his body.In Tel Aviv, some 1,000 demonstrators gathered on Shaul Hamelech Street and marched to the spot where Silman set himself alight on nearby Kaplan Street, later continuing on to the National Insurance Institute (NII). Protesters chanted, "We're all Moshe Silman," and "desperation turns to anger." 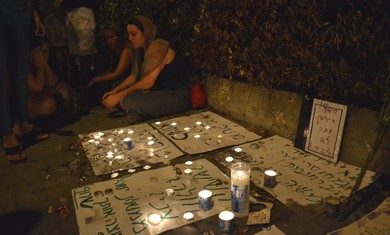 Candle-light vigil for Moshe Silman in Tel Aviv (Photo: Michael Omer-Man)The demonstrators lit candles in a quiet ceremony when they arrived at the spot where Silman set himself on fire. One activist read out the letter the 57-year-old Haifa resident distributed at last week's rally just minutes before he set himself on fire, explaining why he had no choice but to self-immolate. As the activist read out the letter line by line, the crowd repeated after him. “The State of Israel has stolen from me and robbed me, left me with nothing and the Tel Aviv District Court blocked me from getting justice,” the letter read.

Silman went on to blame the state for his downfall and specifically Prime Minister Binyamin Netanyahu and Finance Minister Yuval Steinitz. Silman also highlighted how he was consistently turned down for public housing, as he did not fit the criteria. Different parts of the march bore different tones; people at the front were chanting against the "racist, war mongering government," while a female-dominated line of protesters were demanding public housing.

Rally participants blocked the road in front of the NII. According to friends and relatives, Silman's unlucky spiral was sparked by one small debt to the NII. As that debt grew, he lost his business, his property, his home, and eventually suffered a debilitating stroke that left him 100 percent disabled. Despite receiving a meager disability check from the NII, he was barely able to purchase essential medicines let alone pay rent on an apartment. A small number of uniformed and undercover police officers kept watch over the vigil but allowed mostly allowed protesters to march through and block city streets. Similar demonstrations were held in Jerusalem, Haifa and Beersheba.In Jerusalem, approximately 100 people marched from Netanyahu’s private residence on Aza Street to his official residence on Aza Street at Paris Square. Organizers said that Moshe Silman’s recent death would only serve to strengthen their struggle.“He got to a situation where he felt like he had nothing to live for,” said activist Viki Vanunu, who was homeless last summer and one of the central activists in the tent protests for homeless families.“We don’t want other people to be forced to do this, he gave us the drive that we have to continue fighting,” she said. “We fought before him and we will continue fighting, but now we’ll be fighting even harder because someone died for this. I’m not in favor of what he did, but he clearly did change the struggle because we understand we have to work quickly for homeless people. The National Insurance needs to know this isn’t a game,” she said.Demonstrators were encouraged to come in black with candles.Demonstrators in Jerusalem chanted “We are all Moshe Silman, the State of Israel ruined me.” Activists also read Silman’s letter out loud in front of the Prime Minister’s private residence. “We’re going to remind Bibi that he needs to find solutions,” said Jerusalem demonstrator Mijal Grinberg. On Friday night, hundreds of protestors lit candles and held a vigil at the spot where Silman set himself alight last week.
Advertisement
Subscribe for our daily newsletter