Security guard who caught vandal tells 'Post': I saw him throw paint and grabbed him; suspect released with restraining order from Tel Aviv.

By YAAKOV LAPPIN
OCTOBER 14, 2011 03:34
Vandalized Rabin memorial in Tel Aviv 311
(photo credit: Neri Zilber)
Advertisement
A man who lost his parents and three siblings in a suicide bombing defaced the Rabin memorial in Tel Aviv on Friday night, to protest the release of a terrorist involved in the murder of his family.Shvuel Schijveschuurder’s family members – Mordechai, 43, Tzira, 41, Ra’aya, 14, Avraham Yitzhak, 4, and Hemda, 2, were killed at the Sbarro pizzeria at the corner of King George Street and Jaffa Road in Jerusalem on August 9, 2001.RELATED:
Police, Shin Bet divert resources investigating ‘price tag'
Jaffa: Hate graffiti found in Muslim, Christian cemeteries They were among the 15 civilians who were killed; 130 were wounded.Shvuel Schijveschuurder, 27, acted after it emerged that Ahlam Tamimi, the Palestinian woman who drove the suicide bomber to the pizzeria, would be released as part of the Gilad Schalit exchange deal with Hamas.Early Friday morning, Schijveschuurder arrived at the memorial site on Rabin Square, threw a large bucket of white paint at the memorial, and spray-painted the words “price tag” and “free Yigal Amir” in large, colorful letters on a wall and on the memorial structure.“I saw him throw the paint,” a municipal security guard told The Jerusalem Post. “I ran up to him and grabbed him. I told him, ‘Don’t resist.’ He listened to me and remained calm.” 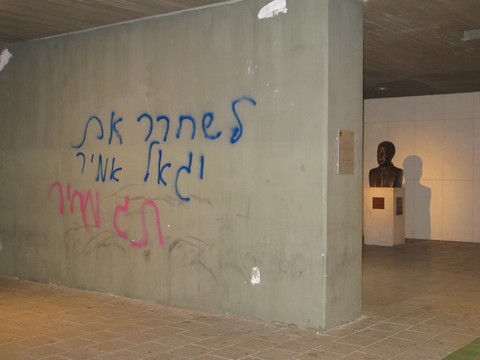 The guard’s colleagues witnessed the incident in a municipal control room on a CCTV video feed, and contacted police, who came to arrest him. He was released soon afterward, and banned from entering Tel Aviv for 15 days.“I wanted to be caught,” Schijveschuurder later told Channel 2.“I stand behind by acts,” he said. “I wanted to attack the holiest site of the Left,” he added during an interview with Channel 10. “Only a crazy person would sit at home and do nothing.”Schijveschuurder said the voices of bereaved family members opposed to the prisoner exchange had not been reported by the media, and that the memory of his family was being trampled on by the release. 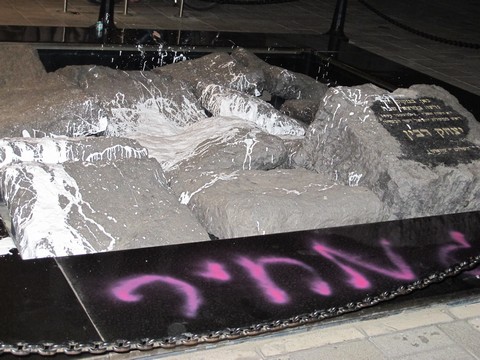 Schijveschuurder’s brother Meir told The New York Times on Saturday that the remnants of the family feel betrayed by the State of Israel, and were planning to return to the Netherlands, from where the family had originally emigrated.The vandalizing of the Rabin memorial sparked both condemnation and justification.The Labor Party in a press release condemned it: “Rabin’s assassination and the monument are a national symbol that serves as a constant reminder that extremism and violence endanger the State of Israel.“Even during these days of heightened emotions, such actions of hatred and extremism should be rejected with disgust. The law enforcement system must be firm and alert during these times to prevent serious acts of this kind.”The Yitzhak Rabin memorial monument denounced “all activities of vandalism and damage to the site, which is a symbol and memory of the murder of Yitzhak Rabin, the late prime minister. The monument, which over the years has become a heritage site, is a memory and a lesson learned in Israeli society.”“The Rabin Center welcomes the approval of the deal for the return of captured soldier Gilad Schalit, blesses the Schalit family, and sees in his release the state of Israel’s obligation to its soldiers.”The center added that it “works to perpetuate Yitzhak Rabin’s memory and to examine the lessons that Israeli society should derive from the assassination, its circumstances and its consequences.”Conversely, National Union MK Michael Ben-Ari said Friday that the suspect who vandalized the Rabin memorial had “gently” expressed the fury of terrorism survivors, Israel Radio reported.

“The release of killers is suited to anarchy and not to a state of laws. Under anarchy, boundaries are crossed, and even Yitzhak Rabin’s gravestone has lost its glory and sanctity,” Ben-Ari said in reference to the impending release of hundreds of terrorists as part of the agreement with Hamas for the return of St.-Sgt. Schalit from captivity in the Gaza Strip.Tamimi, a member of Hamas, was a 20-year-old female university student and part-time journalist, when at the time of the Sbarro bombing. She disguised herself as a Jewish tourist t drive the bomber.She later said that she was not sorry for what she did and does not recognize Israel’s existence. “Despite the fact that I’m sentenced to 16 life sentences, I know that we will become free from Israeli occupation and then I will also be free from the prison,” she said.

JPost.com staff contributed to this report.