By BEN HARTMAN
Car explosion in TA 370
(photo credit: Hadas Parush)
Advertisement
Mob boss Nissim Alperon survived another alleged assassination attempt in Tel Aviv on Thursday. He ran from his car after a man on a motorcycle stuck a bomb to the door, moments before the vehicle exploded and was consumed by flames.The car bombing was the ninth hit attempt that Alperon has survived in the past 12 years.The explosion left the vehicle a smoldering wreck, damaged a car in the next lane, and shattered the windows of a bus a few meters away.Nine people were hurt, with three suffering light injuries and six suffering from shock. All of the injured were evacuated to Ichilov Hospital at the city’s Sourasky Medical Center.One of those treated at Sourasky, Noam, said he was on the No. 51 bus heading north around 1 p.m. when the bus stopped at a red light at the corner of Menachem Begin Road and Shaul Hamelech Boulevard in central Tel Aviv. Noam said he saw a man on a motorcycle pull up next to the car and stick a small black bag to its side before racing off. He then saw the driver get out and flee on foot.Seconds later, the vehicle exploded, with the shockwaves sending Noam to the floor of the bus.Noam, who did not want his last name to be used because the incident was a mob hit, was treated for a series of small cuts on his forehead. He said he initially thought it was a terrorist attack, but quickly realized the bombing was a targeted attack on the car.While police would not confirm that the attack was directed at Alperon or that he was in the car, they did say that the car belonged to his girlfriend and that they are investigating the incident as being linked to the Alperon crime family.Alperon’s lawyer, Moshe Yochai, confirmed on Thursday that his client was in the car, saying that he had spoken to Alperon and his family shortly after the attempted hit.Police confirmed that Alperon spoke to investigators about the incident a few hours later, speaking about what he witnessed.
A spokesman for the Tel Aviv District Police also said he believes that Alperon’s daughter was in the car at the time of the bombing.Yochai said his client has left his life of crime and that “he and his family don’t know why anyone would want to hurt him.” He also said that there was one other person in the car with Alperon, and that he believes it may have been his daughter, although he was not certain.When asked if his client expressed any fear for his life, Yochai asked, “Do you know Nissim? He’s not the type.”Alperon has long been seen as a mobster with nine lives, narrowly escaping repeated attempts on his life. In the previous attempt, a bomb blew up his black Toyota Jeep near his home in Ramat Gan in June 2012. Alperon and his bodyguard were in the car at the time; the bodyguard was lightly wounded while Alperon escaped unscathed. 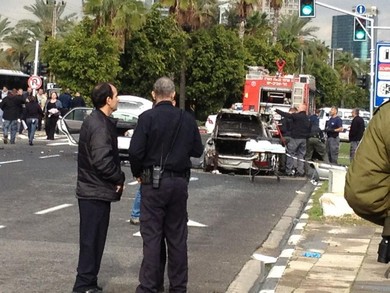 Thursday’s bombing happened not far from the corner of Pinkas Street and Namir Boulevard, where a remote-controlled car bomb killed Nissim’s brother Yaakov in 2008. It was also less than a block away from the site of the bus bombing that wounded 28 people on November 21, the last day of Operation Pillar of Defense.
Video courtesy Eyal Zarchi
Shortly after the bombing on Thursday, the Tel Aviv District Police tasked the Tel Aviv branch of the YAMAR special investigative unit with handling the case.Tel Aviv police reported Thursday that two motorcyclists arrested after the bombing had been released from police custody.There have been a number of car bombings recently in Israel, including three in Petah Tikva just in the past month. Those include one in late December in which a Petah Tikva man was killed when a bomb attached to a motorcycle blew up next to him.Back in September, an associate of the Abergil crime family, longtime rivals of the Alperon family, was killed when a car bomb exploded in his vehicle in Hod Hasharon.
Advertisement
Subscribe for our daily newsletter