At Beit Hakavan, the dishes are too delicious to order just one. 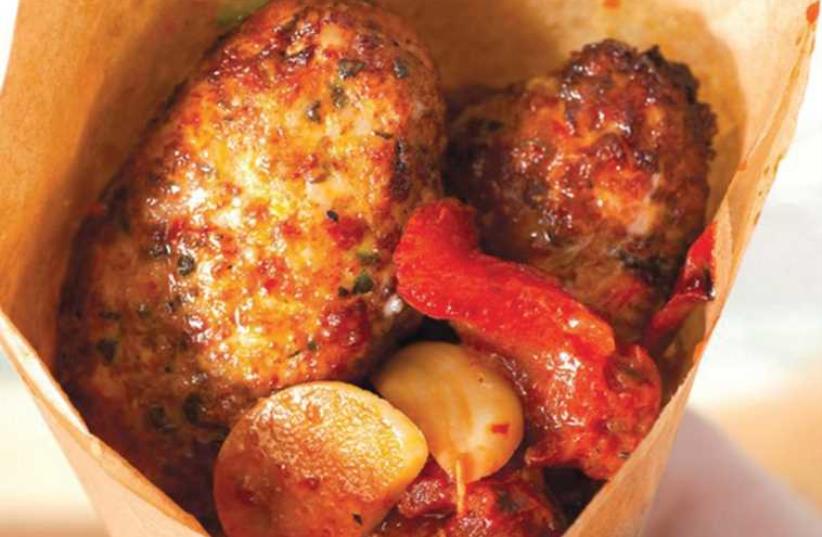 Beit Hakavan restaurant
(photo credit: PR)
Advertisement
I like North African food a lot. It is a very refined cuisine and absolutely delicious if well made. Having eaten at Hamotzi, 2011 Master Chef winner Avi Levy’s authentic Algerian restaurant near Jerusalem’s Mahaneh Yehuda and thoroughly enjoyed it, I was eager to try Beit Hakavan, the chef’s new restaurant in the capital.At Beit Hakavan, situated in an original railway station house along the tracks from Baka towards the First Station complex, one can enjoy lunch or dinner indoors or outside on the upstairs porch.The best way to experience Beit Hakavan is with a large group, as the dishes are too varied and too delicious to order just one. The menu is divided into pan, pita and cone dishes, all of which basically contain the same contents but vary in terms of how they are served. Beit Hakavan’s pita is made in-house and it’s delicious, so make sure to get something that requires scooping.The pan-based menu includes items such as merguez shakshouka, cauliflower and sweet potato skillet and Levy’s famous mixed grill.As we sat down at our table, our waitress began to bring us a selection of salads and dips that come with every main course. In addition to the usual eggplant dips, tehina and chopped salad, there were some interesting tomato and pepper matbuha salads. While we could have easily filled up on the tasty spreads and salads, we made an executive decision to stop and leave room for the next course.We began with the daily special of lamb shwarma with hummus.The hummus was lightly salted and had just enough oil to make it smooth, without making you feel like you were eating emulsified oil. The secret spices didn’t overpower the flavor of the lamb itself; and though the meat was sliced thin, it was anything but dry. This was shwarma the way it is supposed to be.This was followed by Hamotzi’s cigars (the way they are done in the original eatery), stuffed with veal sweetbreads (NIS 43). The sweetbreads were wonderfully crisp on the outside and soft on the inside.Next up was the Mahmmar spud and sweet potato falafel in a cone (NIS 28). Here, too, the falafel was crisp on the outside and soft on the inside. Every bite was tasty, and the flavors melded very well together.After a bit of a breather and complimentary shots of arak, we were presented with siniya kebabs (NIS 46) with pickles and roasted pepper matbuha salad.Drizzled with roasted tehina, the kebabs had a solid, almost sausage-like texture, with surprisingly subtle flavor.Just when we thought it couldn’t get any better, we were presented with tender entrecote (NIS 54) served with a fried egg.Sliced into thin strips, the entrecote was succulent and cooked to perfection. Forget about the dried-up meat you sometimes end up with at other kosher restaurants – this was the real deal.We ordered hot drinks and took another breather. Then came dessert, which consisted of Miriam’s (Levy’s mother) famous baklava (NIS 13). The baklava was a slice of heaven drenched in honey. It was sweet, nutty goodness that fell apart in the mouth, along with a delicate crunch.Beit Hakavan serves tasty, authentic North African food at very affordable prices. The vibe is extremely relaxed and casual, but you still get friendly and attentive service, in a venue where trains used to tread. All aboard! The writer was a guest of the restaurant.Beit Hakavan Kosher 4 David Remez, Jerusalem (02) 533-6044