Israeli supermodel tells Jimmy Fallon how she found out she got the role as 'Wonder Woman.' 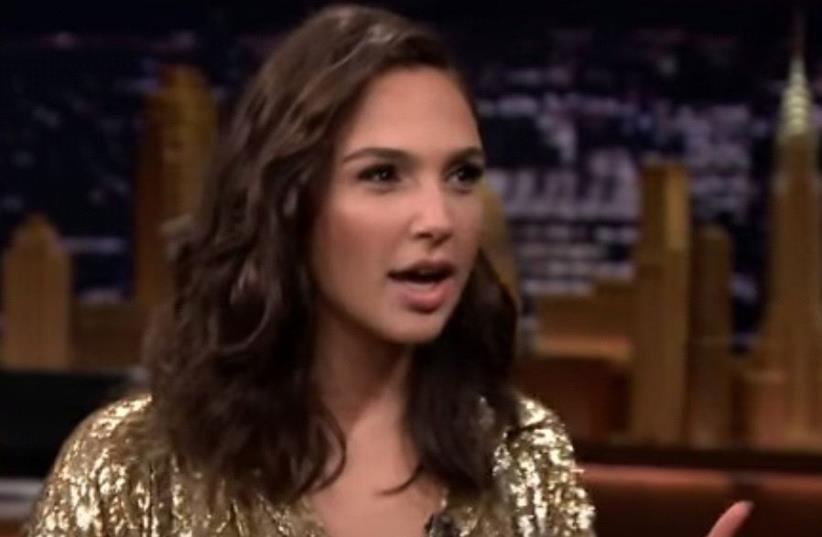 Israeli actress Gal Gadot on 'The Tonight Show' starring Jimmy Fallon
(photo credit: YOUTUBE SCREENSHOT)
Advertisement
The stunning Gal Gadot - star of the new Wonder Woman film - chatted with Jimmy Fallon on The Tonight Show on Tuesday night. Fallon was enamored with her beauty and humor - but a bit taken aback when she dropped an F-bomb on the network TV show. Gadot, a native Israeli, dazzled in a daring gold lamé wrap dress. She explained to Fallon how she found out she was getting the role in the summer superhero blockbuster. Gadot said she'd done a screen test six weeks earlier, and assumed when she didn't hear back that she didn't get the job: "I already think that the part is not mine, f**k it," she said, before gasping and remembering where she was. Fallon cringed and covered his face, but Gadot hung her head in mock shame - but it was all in good fun (after all, they just had to bleep it). Gadot finished up her story, saying that she had just landed in Los Angeles after a 15-hour flight from Tel Aviv, when she turned on her phone to 20 missed calls, and found out she got the part. Fallon asked Gadot what it's like to see herself on enormous billboards around Manhattan. "I'm from Israel, from this small city, and suddenly I'm all over Times Square," she exclaimed. He also asked her about her family, and she told him she has two young children "tfu, tfu, tfu," she said, repeating a Jewish superstitious phrase. Fallon and Gadot then played his classic game "Box of Lies," where he made fun of her accent, and her ignorance of American culture: "You don't have cabbage patch dolls in Israel?!"