A round-up of current events in Jerusalem. 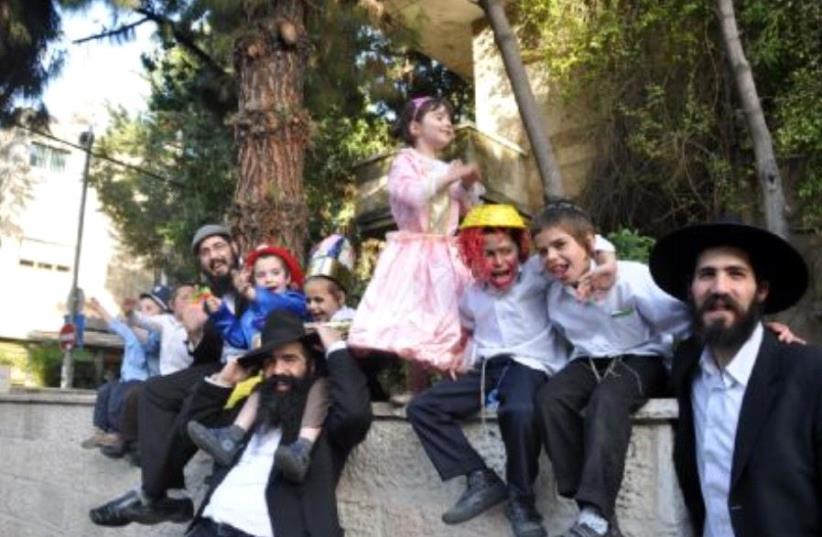 Azza Zaza
(photo credit: WWW.JERUSALEMCHABAD.ORG)
Advertisement
FOR THE seventh consecutive year, Chabad of Rehavia director Rabbi Yisroel Goldberg organized Azza Zaza (“Azza [Road] moves”), a series of staggered readings every hour on the hour of the Purim scroll of Esther at various outlets in his neighborhood. At the Chabad Center itself on Sunday night, there were hourly readings till 11 p.m., and on Monday there were readings throughout the neighborhood from 9 a.m. to 5 p.m.Because Purim is not as time-bound as other Jewish festivals when people have to stop working and light candles at a specified time, Goldberg realized that not everyone could make it to an early evening or an early morning reading. So he devised Azza Zaza, and in the first year managed to get a handful of Jerusalem eateries to make their premises available for readings.This year, in the Rehavia neighborhood and its immediate surroundings, there were 21 Chabad readings on Monday, with many of the participants grateful that they could choose a time that was convenient for them.THURSDAY OF last week, which was the Fast of Esther, was also International Aguna Day, on which Dr. Rachel Levmore, director of the International Young Israel Movement’s Aguna and “Get” Refusal Project, spoke to members of the Knesset Committee for the Advancement of the Status of Women, explaining the importance of a prenuptial agreement and how much heartache it can save if a marriage does not work out.Levmore, who has a PhD in Talmud and Jewish law from Bar- Ilan University, is a rabbinical court advocate who pleads on behalf of women who remain “anchored” in marriage because their husbands refuse to give them a bill of divorce.The Jerusalem-headquartered Council of Young Israel Rabbis in Israel, in cooperation with Rabbi Yonah Reiss and Rabbi Prof. Michael Broyde – both of the Beth Din (Rabbinical Court) of America – has translated the Agreement for Mutual Respect, a prenuptial agreement developed for use in Israel, into English.An additional clause has been included which assigns jurisdiction to the Beth Din of America (as an arbitrator), should either of the parties not reside in the State of Israel, or should the agreement not be deemed enforceable in the jurisdiction that the parties reside. The agreement including this clause has also been translated into French and Spanish.THERE ARE so many stories about heartless CityPass inspectors fining hapless passengers who didn’t have a ticket because the machine at the light rail stop was out of order, or because the device in the bus or the train failed to process their Rav-Kav electronic ticketing card. It’s one of those instances in which the customer is always wrong, regardless of how right he or she may be. Thus, it’s interesting to learn of a positive CityPass story.Kindergarten teacher Brenda Brim got in touch with City- Pass to say that the youngsters in the state religious kindergarten in Bayit Vegan where she works are extremely interested in the light rail and ask a lot of questions about it.Figuring that education of the young is a good thing, City- Pass marketing and public relations manager Ozel Vatik took himself off to the kindergarten and got involved in the youngsters’ activities, during which time he explained to them how a light rail train is constructed, what safety precautions are taken in behalf of passengers, and the importance of remaining alert while waiting for the train as well as when traveling inside it. He also presented them with a CD that contains a song about the light rail.FOLLOWING THE death of their son and brother Adam in 1991, Austen and Jennifer Science of Herzliya, together with their daughter Lisa and Adam’s friends and colleagues, established a room in Adam’s name in the Gesher building at 10 King David Street. Gesher has relocated its operations and is now headquartered at the Hibba Center, 75 Herzog Street, Jerusalem, where a rededication service in Adam Science’s memory will take place on Sunday, March 19, at 3 p.m. conducted by Rabbi Benji Levine and cantor Naftali Hershtik.