Rabbi David Twersky, known as the Skverer Rebbe of New Square, arrived in Israel from Monsey, New York, for his first visit to Israel in 21 years. 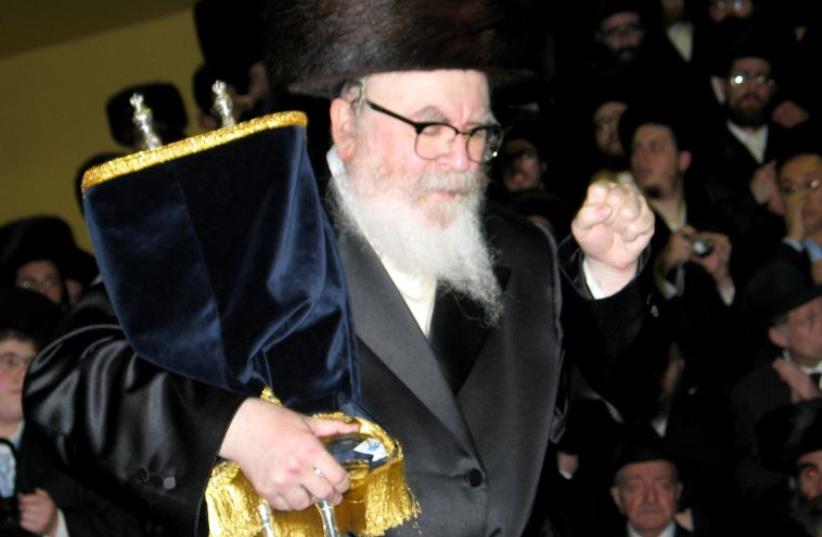 Rabbi David Twersky, known as the Skverer Rebbe of New Square
(photo credit: Wikimedia Commons)
Advertisement
■ EXCITEMENT WAS high in haredi circles in Jerusalem, Bnei Brak and Safed last week with the arrival from Monsey, New York, of Rabbi David Twersky, known as the Skverer Rebbe of New Square. It was his first visit to Israel in 21 years. Some 1,800 of his disciples from different parts of the world came to Israel for the occasion, with many of those from the US arriving on the same flight.Among those participating in the huge welcome reception at Ben- Gurion Airport were MKs Meir Porush and Israel Eichler, as well as many well-known haredi rabbis.Twersky participated in prayer services at the Western Wall, Rachel’s Tomb and at the graves of the righteous on the Mount of Olives, Skver institutions in Jerusalem and Bnei Brak, and the Arizal Synagogue in Safed. During his visit, Twersky participated in the affixing of mezuzot on new buildings of Skver institutions. He also visited his brother-in-law the Belzer Rebbe Yissachar Dov Rokeach in Telz Stone. Last Sunday he went to Ashdod for the laying of a cornerstone for a religious institution headed by the Talna Rebbe Amitai Twersky.The extraordinary Twersky dynasty originated in Chernobyl.Descendants of the founder, Rabbi Menachem Nochum, who was a disciple of the Baal Shem Tov, have spread to many parts of the US, Israel and England.■ MOST OF the events held by the Israel Democracy Institute take place in its own premises in what used to be the home of the late philanthropist Gita Sherover in Jerusalem. But this week the IDI teamed up with Tel Aviv University’s Cymbalista Jewish Heritage Center to hold a roundtable on what happens when Judaism meets state.The event, which was opened by Prof. Dan Laor, the head of the Cymbalista Center, was by way of promoting interest in a new IDI book which has the same title as the event, which featured conversations between academics and journalists with past and present members of Knesset in the first half of the program, and a roundtable in the second half without Knesset members but with academics and two people of opposing political views: Maj.-Gen. (res.) Gershon Hacohen, who is known to be a hard-line right-winger, and author Guy Baram, whose politics are left of center.■ WHILE HAIFA and Neveh Shalom, the village located halfway between Jerusalem and Tel Aviv, are among the better known examples of Jewish- Arab coexistence, there are several other areas, such as Jaffa, where on Thursday of this week artists, philosophers, community activists, researchers, trailblazers, entertainers and other people of influence – both secular and religious – were scheduled to come together for a multicultural happening at the Arab-Jewish Center in Jaffa.Facilitators were Udi Cohen and Ibrahim Abu-Shindi of the Citizens Accord Forum between Jews and Arabs in Israel and the Jaffa Convention of Arabs and Jews in Israel; and Rabbi Shem Tov Menachem of the Rabbis Committee for Dialogue and Religious Peace Initiatives.The event was slated to be opened by Rabbi Michael Melchior, the honorary chairman of the Jaffa Convention, and among the personalities who were scheduled to present talks or entertain were filmmaker Boris Maftsir; Safa Dabur, founder of the Nazareth Cinematheque; educator Adina Bar-Shalom; diabetes specialist Dr. Yunis Abu Rabia; singer and cantor Rabbi Haim Louk; art curator Said Abu Shakra; “supernanny” Michal Dalyot and chef Maiser Abu-Shada Seri.Not directly related to the happening but certainly part of Jewish-Arab coexistence in Jaffa is the Arab-Jewish women’s choir Shirana, conducted by Yair Dalal, which is looking for new voices to be trained by voice development teacher Shirin Daniel. Women and teenage girls who are interested in auditioning for the choir should telephone (03) 508-0898.■ IT’S KNOWN as Shin-Nen-Kai, and if you’re trying to figure out which Asian language it is, the answer is Japanese and it means Japanese New Year, which is being celebrated at 11 a.m. today, at the Japanese Embassy in the Museum Tower in Tel Aviv. Those attending will receive an explanation of kakizome, which is the special Japanese calligraphy for the New Year.The event will be opened by Japanese cultural attaché Seiya Shimada and Arie Kutz, the chairman of the Israel Friends of Japan Association.There will be several interesting highlights, including a demonstration of Japanese flower arrangements by Ilya Babikov.