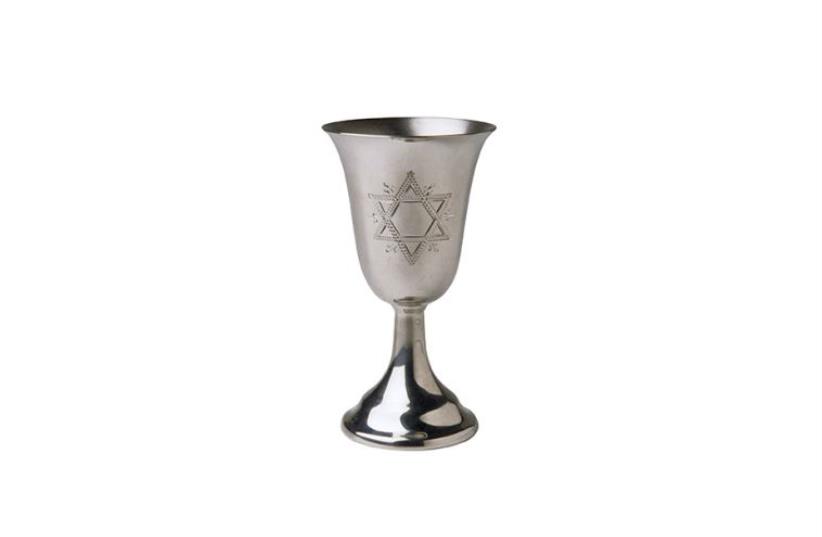 A kiddush wine cup
(photo credit: INGIMAGE)
Advertisement
♦ THE BRITISH accent is gaining in strength at Talbiyeh’s Hazvi Yisrael congregation. Two weeks after ex-Londoners Stuart and Anne Dove hosted a kiddush to celebrate the marriage of their son David, another family of British expats hosted a four-generation kiddush to celebrate two golden wedding anniversaries and a 100th birthday. Brothers Adrian and Laurence (Shmuel) Becker, formerly of London, were married within three months of each other. Adrian and Sheila Becker were married in September 1965, and Laurence and Renee Becker were married in December of the same year. Both couples settled in Jerusalem, where Adrian Becker works as an internationally recognized expert in orthodontics, while Sheila Becker has worked extensively in public relations and in Jewish heritage tours. Laurence Becker is a successful lawyer, and Renee Becker is the projects director for Emunah Jerusalem.Renee’s mother, Netta Pollak, who celebrates her 100th birthday this week, also settled in Jerusalem and was present at services this week. At the kiddush, people came up to her not only to congratulate her but also to ask for a blessing, which she readily gave. The Becker children and grandchildren were also present as were many Brits from other congregations. Adrian Becker is a former chairman of the congregation, and his brother is a member of the committee, though chances are high that he too will become a chairman.♦ WHAT DO actresses Aliza Rozen and Rivka Michaeli, singer and actor Yehoram Gaon, Israel’s fifth president Yitzhak Navon, political analyst and former MK Einat Wilf, former Supreme Court president Aharon Barak, bestselling author Shifra Horn, hi-tech billionaire Gil Schwed, founding president of the Israeli Democracy Institute Arik Carmon, Nobel Prize laureate Daniel Kahneman and Avner Netanyahu, the soldier son of the prime minister, have in common? They were all students at the same high school adjacent to the Safra campus of the Hebrew University, popularly referred to as Al Yada. The school is celebrating its 80th anniversary today (October 30), and a number of famous people from different walks of life are expected to attend the festivities. Al Yada has always had a reputation for high achievers in both its faculty and student population.While considerably older than the state, Al Yada is not the oldest high school in Jerusalem. That honor goes to the Gymnasia Rehavia, which has also produced a lot of high achievers plus two presidents – Ephraim Katzir and Reuven Rivlin – as well as Supreme Court President Miriam Naor. The Gymnasia, the country’s second modern high school, was founded in 1909, the same year Tel Aviv was founded.♦ IT TOOK 15 years of gentle persuasion, fist-thumping and loads of cutting of red tape to put up London’s first eruv. It never occurred to David Schreiber, when he and a few like-minded friends embarked on the project, that they would meet with so much opposition, and from the least expected corner – the community’s haredi faction.Schreiber told the story of some of the hurdles they had to overcome to an audience that was made up of mostly British expatriates who, like him, come from northwest London and who in some cases were personally involved in the eruv dispute. His presentation was given within the framework of the Jerusalem Biennale in which his wife, Ruth, a talented artist, is exhibiting.Before her husband went into the fascinating saga of the eruv, Ruth Schreiber explained that all her art evolves from the things that have happened in her life. She was privy to all the challenges which the construction of the eruv presented and was there to share her husband’s triumph when the eruv finally became a reality. Her artistic creation “On Entering the Eruv” is based on a map of the area.Even though the eruv is almost invisible to those who are unaware of what it is or have no use for it, there were Jews who objected to it on grounds that it would foster anti-Semitism. The controversy received astonishing media coverage in both the Jewish and general press.If Israel has problems defining its borders, these seem almost minuscule compared to what David Schreiber and his colleagues went through to define the boundaries of the eruv. Had it been Scotland instead of England, one could say Schreiber was inspired by the tale of Robert the Bruce and the spider, which prompted the motto, “If at first you don’t succeed, try, try and try again.”