What's happening around the nation. 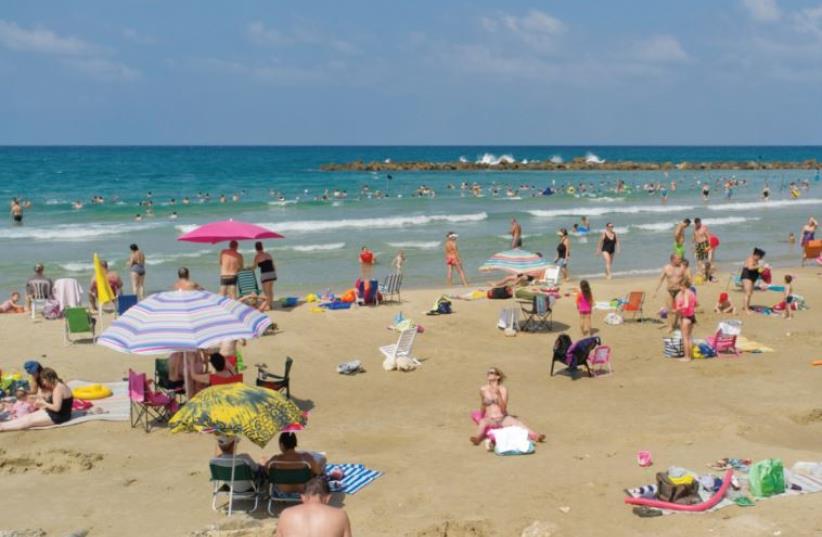 Hatzuk Beach, Netanya, by Orit Siman Tov, from ‘The Last Sea – Israeli Art and the Sea’ exhibition.
(photo credit: Courtesy)
Advertisement
■ NETANYA HAS 13 twin city agreements on four continents, but the one for which it is best known is Nice, France, due to the fact that such a large number of French immigrants have chosen to live in Netanya.But large numbers of French immigrants are also living in Ashdod, and are making their presence felt in Jerusalem. Because many of the French immigrants are observant and like to live within easy walking distance of a synagogue, it took them a little while to start settling in large numbers in secular Tel Aviv. But according to a recent article in Haaretz by Noa Amiel Lavie, the French are reviving disused, long neglected Tel Aviv synagogues which had fallen into disrepair. The person largely responsible for the revival is Elie Benacom, a real-estate developer, who began building congregations by doing the rounds of hotels and seeking out French tourists and giving them maps that showed existing synagogues with active congregations, so they would know where to go for Shabbat services. Many of these tourists were and are planning aliya, but wanted a synagogue that was familiar and reminded them of the one back home. With so many French congregants in the revived synagogues, that’s not a problem at all.This trend is also catching on in Jerusalem, albeit not at the same pace. ■ ITALY, ALTHOUGH Fascist during World War II, was among the first European countries to officially recognize Israel, and has maintained an embassy in Tel Aviv since 1949. Ambassador Francesco Maria Talo, who will escort Italian President Sergio Mattarella when he arrives in Israel towards the end of the month. Mattarella will deliver a lecture at the Hebrew University on October 30, and will in all probability visit the Eretz Israel Museum in Tel Aviv, which on September 28 opened an exhibition that features old photographs of Jewish refugees who crossed the Alps to Italy and found a warm welcome in Italy’s port cities. Some refugees remained there for three years until they were able to sail for Palestine. Some of their babies were born in Italy during this period. An extremely active figure in forging relations between the Jewish leadership of Palestine and the Italian establishment was Ada Sereni, the widow of Enzo Sereni, one of the first Italian Zionists, and a founder of Kibbutz Givat Brenner. Enzo joined the British Army during the Second World War and helped set up a parachute unit with the aim of infiltrating enemy territory. Sereni himself parachuted into Italy in May 1944, but was captured immediately by German troops and sent to Dachau, where he was shot on November 14, 1944. Ada remained true to his ideals and continued with his work on behalf of Jewish refugees. Among the photographs in the exhibition is that of little-known hero Enrico Levy, who despite having proved his expertise in all things maritime, was dismissed from the Navy under Italy’s wartime racial laws. This did not stop him from engaging in anti-Fascist activities or from helping Jewish refugees who had somehow arrived in Italy. After the war, he became a Mossad activist and captained the Dalin, the first Aliya Bet boat of illegal immigrants who landed on the beach of Givat Olga. After the establishment of the state, Levy was made captain of the first Zim Line passenger ship.■ JUST IN Time for the High Holy Days, Moti Dotan, chairman of the Lower Galilee Regional Council, inaugurated a new synagogue to be known as the Founders’ Synagogue in honor of the founders of the congregation who for 12 years conducted services in a tent until they had enough money to build a permanent structure. The carpentry and synagogue furniture alone cost NIS 250,000 and was executed by Lavi Furniture which specializes in synagogue furniture and is part of the industrial arm of Kibbutz Lavi. The inauguration ceremony was conducted in presence of Minister for Religious Affairs, David Azoulay.■ LOVERS OF Japanese culture should decide whether they want to be in Haifa, Tel Aviv or Beersheba some time between December 10-14 when the famed Yamato Drummers will be touring Israel. They will perform in the Haifa Auditorium on December 10, the Charles Bronfman Auditorium in Tel Aviv on December 12 and the Beersheba Performing Arts Center on December 14. Founded in 1993, the Yamato troupe tours the world for most of the year and has performed in more than 50 countries and regions, consistently receiving rave reviews. The group does not reserve its performances for the theater stage alone, but also performs in schools and gives workshops. The group’s artistic director is Masa Ogawa. Staff at the Japanese Embassy can barely contain their excitement at the prospect of hearing a beat from home.