News briefs from around the Jewish world. 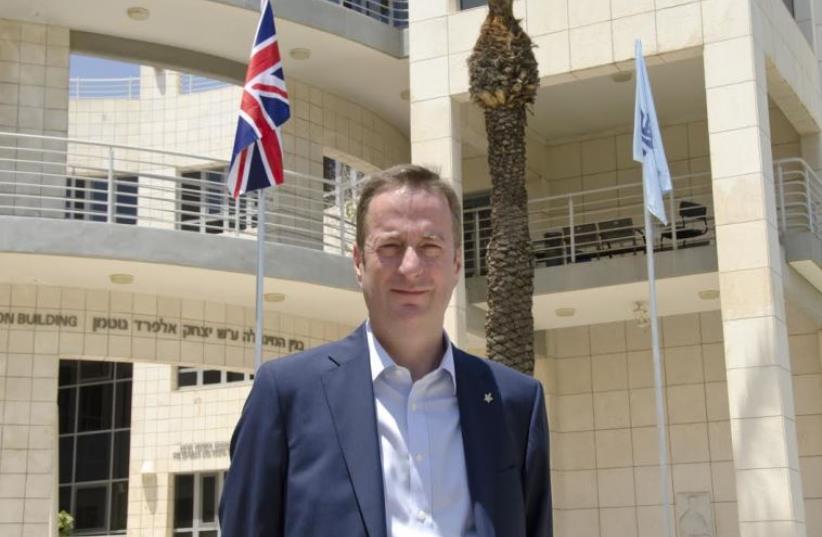 British Ambassador to Israel David Quarrey
(photo credit: MICHAL ROCHE – BEN AMI)
Advertisement
■ EX-SERVICEMEN and ex-servicewomen from the British Armed Forces were among the people who gathered at the Commonwealth War Graves Commission cemetery in Ramle on Remembrance Sunday this week to commemorate the fallen of World Wars I and II.The event was presided over by British Ambassador David Quarrey, who laid a wreath on behalf of Her Majesty Queen Elizabeth II. Members of Britain’s royal family participated in both wars, and an uncle of the queen was killed in France in World War I.Quarrey said: “Today we remember those who fought for Britain and her allies.We remember the unimaginable sacrifice of successive generations who fought for freedom. And we remember all those who have fallen in war.”British naval and air force attachés along with the IDF’s Tzevet veterans attended the moving ceremony. A similar ceremony had been attended in London by Boris Johnson, the visiting mayor of England’s capital, who when attending events in Tel Aviv on Monday was still wearing the traditional red poppy on his lapel.■ JOHNSON, TOGETHER with Yesh Atid chairman Yair Lapid, who was recently in London and who proved that he could hold his own on the BBC’s Hardtalk program, were the guest speakers at the annual Balfour Dinner hosted at the Tel Aviv Hilton by the Israel, Britain and the Commonwealth Association.The two were a little late in arriving, and IBCA chairman Alex Deutsch raised a laugh when he mounted the podium to welcome them, realized they weren’t there and used his cellphone to find out what was keeping them. The dinner – or rather its speakers – attracted the largest turnout that anyone could remember, and Deutsch, looking out at the crowd of mostly British expats, said: “I feel it’s my simha. I have an unmarried son here, and this is good practice for when he finds a bride.”Deutsch also welcomed former Israel ambassador to the UK Daniel Taub, who recently completed his tenure, and Raphael Singer, who is Israel’s ambassador to Angola, Mozambique and Sao Tome and Principe, singling them out as British expatriates who are representative of the contribution of British immigrants to Israel.Johnson and Lapid were not strangers to each other. Ten years ago, they had dinner together in Tel Aviv, and Johnson recalled that they had such a great time that they ended up dancing on the tables. Lapid’s response was that this time around he barely recognized Johnson, saying: “Boris, I didn’t recognize you sober.”Lord Stuart Polak, who was recently elevated to the House of Lords and is a former chairman of the Conservative Friends of Israel, quipped that he has all of the photos from that dinner, no one else has seen them, and one day he would sell them and make a fortune.Polak, together with Deutsch’s wife, Gloria, who writes for The Jerusalem Post, and Karen Abraman represented a rare trio, in Tel Aviv – three Liverpudlians sitting at the same table.A rare scene during the evening bears noting. After Australian Ambassador Dave Sharma had proposed the toast to the State of Israel, almost everyone present sang “Hatikva,” including the young waitress Eden Cohen, who had brought wine-filled toast glasses onto the podium and was standing behind the ambassador. It was nice to see such spontaneous patriotism.Lapid apologized that he couldn’t stay for dinner. He had another engagement. It was his mother’s 81st birthday.■ LOVERS OF Yiddish who are interested in hearing forgotten as well as familiar melodies can make their way to the premises of Yung Yidish in the Tel Aviv Central Bus Station on Wednesday evening, November 18, to hear Olga Avigail and Mendy Cahan perform in Yiddish and similar languages, accompanied by Eli Preminger on the trumpet as well as other musicians. To those who have never been to Yung Yidish, it’s a heartwarming journey into the land of nostalgia, around tables in a candlelit, shtetl atmosphere surrounded by old books and yellowing pages of old Yiddish newspapers. There are also the kind of refreshments associated with the shtetl – herring, baked potatoes and schnapps.■ ONE OF the annual special days observed by WIZO is the International Day of Violence Against Women, which this year takes place on November 25.WIZO is organizing a special program to mark the day at WIZO House in Tel Aviv, and Prime Minister Benjamin Netanyahu has agreed to visit the WIZO women’s shelter in Jerusalem on that day. Last year, the visitor was President Reuven Rivlin, who was accompanied by his wife, Nechama.