Mesila, an NGO inspired by the Sages, applies ancient solutions to modern problems. 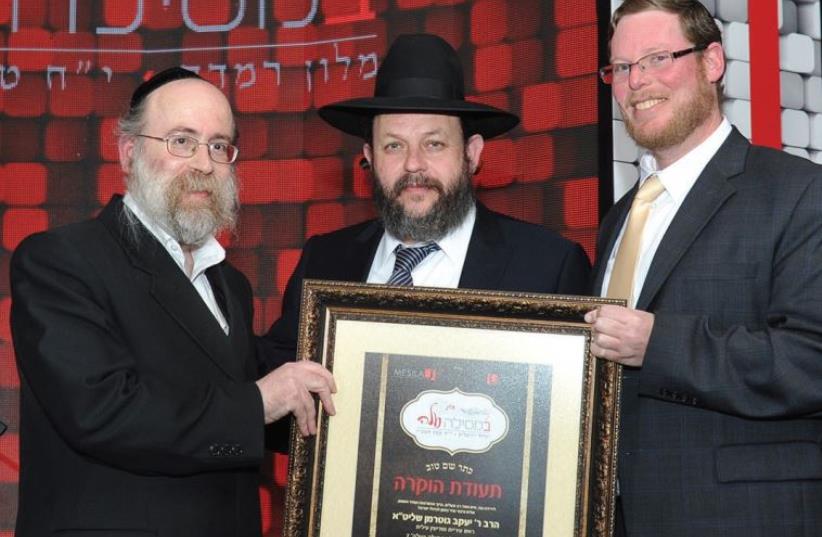 Mesila chairman Shmuli Margulies (left) and lecturer Natan Rozen present Modi’in Illit Mayor Rabbi Yaakov Guterman (center) with a certificate of recognition
(photo credit: RACHEL MYERSON)
Advertisement
In Israel, 66 percent of those living below the poverty line are members of the haredi community. Mesila, a grassroots nonprofit organization, is implementing ancient philosophy to solve this social problem, one family at a time.On December 30, Mesila held its annual fund-raising dinner at the Ramada Hotel in Jerusalem.The organization was founded by Rabbi Shmuli Margulies, an immigrant from London. With branches in the UK, US and Canada, Mesila is leading the way for the Finance Ministry and schools worldwide.To honor his father’s memory, Margulies gave loans to people in financial difficulty. However, he soon realized that this was an obstacle to solving the problem of poverty because it failed to “deal with the core and root of the problem.” He began offering financial counseling instead, and Mesila’s family counseling program was born.The organization’s vision is to “become a worldwide movement synonymous with the Torah path – mesila – to financial stability and independence” by teaching haredim how to become economically self-sufficient and financially stable.Mesila offers three programs to combat poverty, in addition to oneoff lectures and courses in tandem with other organizations. The family counseling program helps married couples avoid financial oversights and ignorance of markets, and overcome physiological blocks related to economic stability. The business counseling program offers advice in running a commercial concern. And the education program targets adults and youth as young as junior high.Why are haredim specifically affected by poverty? Sarah Eisen, Mesila’s public relations director, identified broad trends within the community, such as low income and large numbers of children.A haredi teacher in Mesila’s youth education program said that when she was newly married, she thought that her pure faith in her husband’s full-time religious study would ensure God’s sustenance and was shocked when they began to struggle financially.A recurring theme throughout the fund-raiser event, testimonials and conversations with Mesila staff was weddings. There is an air of competition surrounding haredi nuptials. One woman broke off our conversation regarding her beneficial interaction with Mesila to point out a woman in the crowd whose only daughter is now her daughter-in-law. “We got her!” she said.It is not unusual for girls in the haredi community to be married by 17, meaning that the parents bear the brunt of the wedding expenses.Mesila’s education program primarily targets seminary students, teaching them about finances to benefit them in their married lives.One alumna from Bat Yam reported: “I think differently now… I refuse to put my parents into debt over my wedding. I sat with them to determine what they can afford to spend, and I insisted that we not spend one agora more.”Another said that she was “rehabilitated from ‘What will they say?’” This problem is not limited to Israeli communities. Margulies related a conversation with a London-based friend who estimated that 60 to 70 percent of local families cover their children’s wedding expenses from charitable sources. Hence, Mesila’s adult education programs discuss subjects such as how to marry off children without incurring financial collapse. Most haredim do not spend extravagantly, so the solution is not to cut expenses but to receive guidance on how to make the most of what they have. Mesila’s latest initiative is to train counselors about income enhancement, to allow them to work directly with clients and their specific problems.Unlike their female contemporaries, male yeshiva students remain uneducated in regard to financial matters, largely due to the difficulty in penetrating yeshivot (particularly in Israel), which focus solely on religious education. Yeshiva teachers viewed Mesila’s education program as not only deviating from the focus of yeshiva learning but undermining it. Mesila finally managed to tap into haredi male youth through its Chatanim (bridegrooms) program.Mesila is addressing this lack of education with the sensitivity necessary in such a zealous community. The mayor of Modi’in Illit, an area where Mesila is particularly active, who spoke at the event, emphasized the ability of the haredi community to survive independently and without financial assistance like other members of society. His evident pride was echoed in many testimonials of males who have sought Mesila’s assistance once they had no other option.Hence the preventative measures taken in the Youth Education program, where children discuss topics such as the cost of their sandwiches on a weekly, monthly and yearly basis to instill a sense of financial awareness.Mesila is fueled by people who value community and are careful about giving, from the man who retired from a successful business career to volunteer to work full time in Mesila’s business counseling program, to the driving force of the organization, Rabbi Margulies, who understands that poverty is “destructive” and “not a goal in Jewish life” and asserts that Mesila’s “main goal is that you shouldn’t need it.”