What is it? How did it get there? 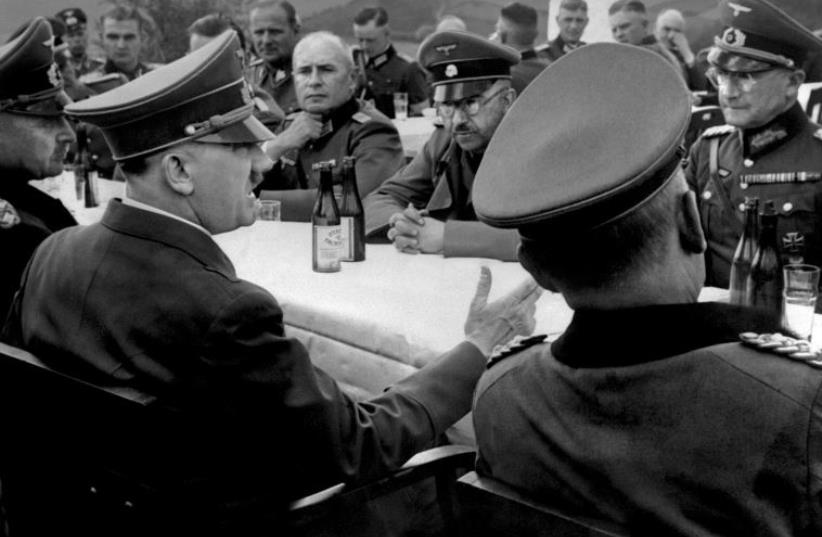 A picture dated 1939 shows German nazi Chancellor and dictator Adolf Hitler (4th L, no uniform) having a drink with high rank officers of his general staff including Heinrich Himmler (background, glasses and moustache) during a military campaign at the beginning of World War II.
(photo credit: AFP PHOTO)
Advertisement
An Idaho couple found a 1938 Nazi explosive in her shed, The Idaho Statesman reported earlier this week.Landa said that her parents found what appeared to be an old artillery shell last week while going through their old tin shed. Her parents, who lived in the home for the past 25 years, said they have no idea what the explosive was or how it came to be in their shed.Landa took the artifact to her own home, but was soon concerned it might be dangerous. "I was just paranoid," she told the Statesman. "I didn't want to be responsible for an accident."Landa called the area historical society, who told her to call the police, who contacted the military. On June 2, Landa posted to Facebook a picture of a military team entering her shed to collect the explosive."The Military Explosives Team from Mountain Home just left my house," she said in her caption. "We found an old 1938 German Nazi Artillery Shell, with the propellant still on."According to the Statesman, a spokeswoman from the military base said that the explosive was a 1938 37mm German round that "was found to be hazardous" and that the military personnel destroyed it by detonation.Although Landa was disappointed she did not get to keep the artifact as a historical souvenir, she said the incident was "Definitely a once in a lifetime experience."