In design: Floor to ceiling

The Cosentino Center offers a wide array of stone surfaces. 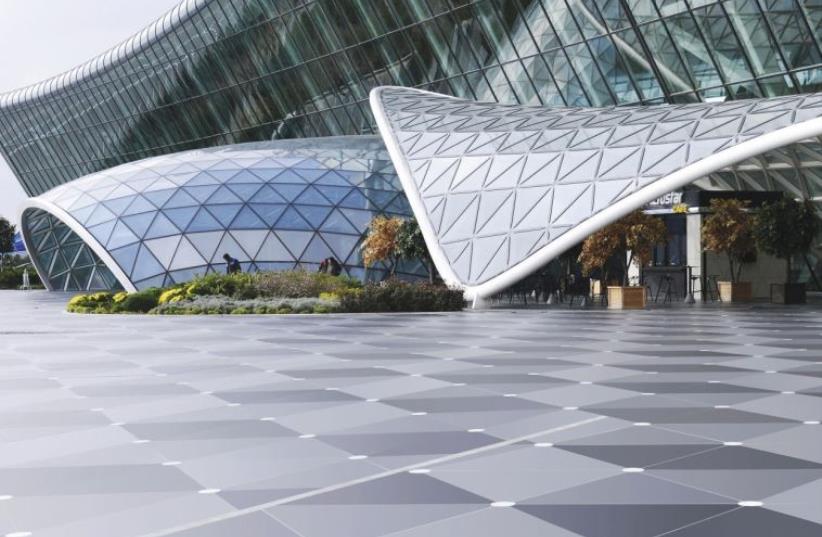 Baku airport with dekton floor by cosentino
(photo credit: INGIMAGE)
Advertisement
On the morning after the grand opening of the new Cosentino Center in Petah Tikva, the massive warehouse/ showroom was reminiscent of a ballroom following a particularly raucous wedding.The pristine white floors shone through footprints left by Israel’s design elite the night before. Empty champagne glasses were scattered throughout the space. Yet even in its somewhat dishevelled state, the Cosentino Center was a picture of beauty and elegance.Last month, Israel became one of 90 international locations to host one of the Cosentino Group’s concept stores. The Spanish company, whose ties with Israel date back to the 1990s, finally arrived on the scene to bring the newest and most sophisticated stone surfaces available to the local market.The Cosentino Group, like so many successful businesses, began as a mom-and-pop endeavor. In 1940, Eduarda and Eduardo Cosentino, parents of the current owners of the Cosentino Group, set up a basic marble processing operation in Macael, Spain.Forty years later, their three sons took over the business, opening a small factory that processes white marble. With time, the brothers realized that in order to stay ahead of the market, they would have to broaden their horizons. In 1990, after a decade of research and development, Silestone was born, putting Cosentino on the map as the greatest surface innovators of the time.For global sales director Eduardo Alfonso Martinez Cosentino, going into the family business was a natural choice. The third generation of Cosentino boys, he spends most of the year traveling the world, making rare stops at his Houston, Texas, base. A charming man with a big smile, Cosentino beams when speaking about the company.“I started working with the company when I was 14 years old. My passion for what I do is huge,” he says.Though he has opened dozens of Cosentino centers, he was particularly thrilled about arriving in Petah Tikva.“Israel is a very important market for us,” he explains. “This was the first place we came after we developed Silestone in the 1990s, and we are very excited to be here today.”“Per capita, Israel uses the largest amount of quartz surfaces in the world,” adds Itay Shimony, area manager for Cosentino Israel.The Shimonys were instrumental in making the Cosentino Center in Israel possible.“We’ve been dreaming of bringing our two families together for a long time. Last year, we decided to make it happen.”This year, the Cosentino Group is celebrating the 25th anniversary of Silestone, a surface that contain 94% natural quartz used primarily for bathrooms and kitchens.“Silestone was an international revolution.Now, a quarter of a century later, Cosentino is introducing Dekton, an ultra-compact surface that represents the new generation of innovators and consumers,” says Shimony. “There are a lot of stone manufacturers around, but Cosentino is the only company that presents solutions for the whole house.”On the wall facing the entrance to the new center are enormous slabs of Dekton, which has infinite applications in the home.One of the big advantages of Dekton is that is heat and bacteria resistant, a huge asset when considering the kitchen or bathroom.In the showroom, Cosentino points out a Dekton kitchen design in which the sink and counter top are completely seamless.“Creating a seamless kitchen was a huge feat for us. The entire unit is antibacterial and easy to clean. That is the big advantage of the product. It took over 25,000 hours and an investment of €160 million to develop Dekton,” explains Cosentino. “Our motto is ‘Imagine and Anticipate.’ Being an innovative company means that research and development are at the heart of what we do.”“With Dekton, the sky is literally the limit,” says Shimony. “You can use it for counter tops, sinks, bathrooms, facades and flooring.”Says Shimony, gesturing toward the floor made of a cool gray block of wide slats, “This color came from Israel. We were working with an architect who had this exact shade in mind but didn’t exist yet. Six months later, we had it for her.”The hue is one of seven colors currently available in Israel and part of Cosentino’s promise to stay in step with its customers’ needs.“Each region has its own favorites. In some areas the solid surfaces do better, while others prefer veined stone. Our goal is to identify and provide each market with what it asks for,” says Shimony.Aside from Silestone and Dekton, the Cosentino Center offers ECO, a recycled surface; and Sensa, Cosentino’s granite line.“We continue to quarry natural stone,” says Cosentino as he passes slabs of polished marble in the warehouse. “We are the second-largest supplier of granite in the world.”Cosentino’s international clientele breaks down into domestic and corporate consumers.Dekton and Silestone can be found in a bath in Herzilya, as well as the massive exterior of the Baku Airport in Azerbaijan.Alfonso and Shimony anticipate that Cosentino will hit both groups in Israel.One of the imperatives of the center is to provide a one-stop solution for interior designers and architects.“Because of the versatility of the products, Cosentino answers the needs of a very wide range of customers, from people looking for one sink or counter top to entire homes and major corporate projects,” says Alfonso.The company is currently partnering with Israeli architect Moshe Tzur on a luxury spa in the Azrieli Center in Tel Aviv.“Our innovation isn’t only about the product but the approach to the market, and the center is a big part of that philosophy,” says Cosentino. “Our warehouse is a place where we can meet our customers in a clean and beautiful environment. The showroom is a place where we can educate them about our products and where we can listen to their design needs.”  The Cosentino Center is located at 33 Nachshon Street in Petah Tikva. For more information, visit www.cosentino.com.