‘Oslo’ brings nine months of secret talks in 1993 to life. 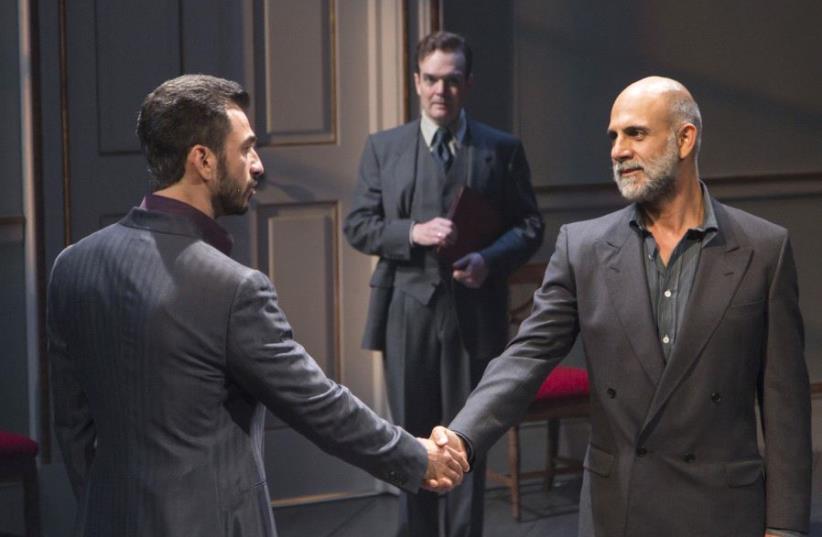 A scene from Lincoln Center Theater's production of OSLO
(photo credit: T. CHARLES ERICKSON)
Advertisement
It might seem like an unlikely story for a Broadway show. But this month, the play Oslo, which dramatizes the story behind the 1993 Oslo Accords, will have its official opening at the Vivian Beaumont Theater in New York City’s Lincoln Center.The show, written by J.T. Rogers and directed by Bartlett Sher, follows the little-known story of the integral role a Norwegian couple played in getting the Israelis and Palestinians to the negotiating table.While the play focuses on Norwegian diplomat Mona Juul and her husband, Terje Rod- Larsen, there are plenty of supporting characters that take the stage, including Uri Savir, the Israeli negotiator, deputy foreign minister Yossi Beilin and even an appearance by Shimon Peres.Savir told The Jerusalem Post that Michael Aronov, who plays him in the show, called last year to get some tips on authenticity. While Savir hasn’t seen the show, he said, “I have many friends who have seen it and they love it.” But he’s not rushing to New York to sit in the audience, since “I’ve seen the real thing!” Overall, Savir said, he sees the play itself as a good thing, as “it puts a very positive spin for a New York audience on Oslo.”Reached via phone, Beilin’s wife, Daniella, said they’d heard the show was on stage from friends in New York, but that nobody from the play had reached out. She added that while she’d heard that not all the details were exactly how they happened, she felt the overall portrayal was “positive.”Sher dreamed up the show after he met Rod- Larsen, whose daughter attended school with his eldest daughter. The families became friends, and the Tony Award-winning director learned of the Norwegians’ impressive diplomatic exploits. Sher, who most recently directed the Broadway revival of Fiddler on the Roof, knew he wanted to bring the story to the stage, though he had some concerns.After all, he said in a press briefing for the play held last week, the conflict in the Middle East is “impossible to talk about. Everybody’s opinion is absolutely concretized in one direction or another.”But still he persisted, bringing in Rogers to write the screenplay, who recognized that the tale had all the elements of a political thriller – a ticking clock, immense pressure and a great deal of subterfuge and sneaking around.The pair of them workshopped the play for years, and it took the stage off-Broadway last summer, running for just over two months and garnering critical praise. Variety called it “unequivocally fascinating” and The New York Times said the show was “the stuff of crackling theater.”The play is in previews on Broadway now and will have its official opening night on April 13.Rogers, speaking at the press briefing, noted the freedom he had in tackling such an event in an artistic forum.“We’ve been very up front that this is not a documentary... it’s a work of art,” he said. After all, they had to squeeze nine months of talks into just under three hours, including 64 scenes, constant changes in location and a “juggernaut of events,” said Sher.But both recognized the powerful nature of a show based on such tense, politicized historical events.“We have a very complex, searing conversation between Palestinians and Israelis in New York City,” said Sher. “And the vehicle of theater and the comfort of time and history allows the complex conversation to take place.“In a one thousand-seat theater in the middle of New York City, you have an Israeli man stand up in front of a Palestinian and list the most heartrending rage-filled grievances against the Palestinian people,” he said. “And in turn, a Palestinian looks at an Israeli and renders forth the most painful and raw enraged feelings of Palestinians, and then they say, ‘And now how do we go forward?’ What theater can do is allow that conversation to take place.”But, as several reporters at the press briefing in New York pointed out, more than two decades after the Oslo Accords were signed, peace seems farther away than ever. Rod- -Larsen responded that he still finds reasons to be optimistic.“The most important message [in the show] is that the impossible is possible,” he said at the event.“Today, of course, the Middle East is anarchy and chaos, but what I think the play portrays is that even in the darkest of hours, there is the possibility of finding a solution.”