When it comes to diplomatic matters, these are all the prime minister’s men. 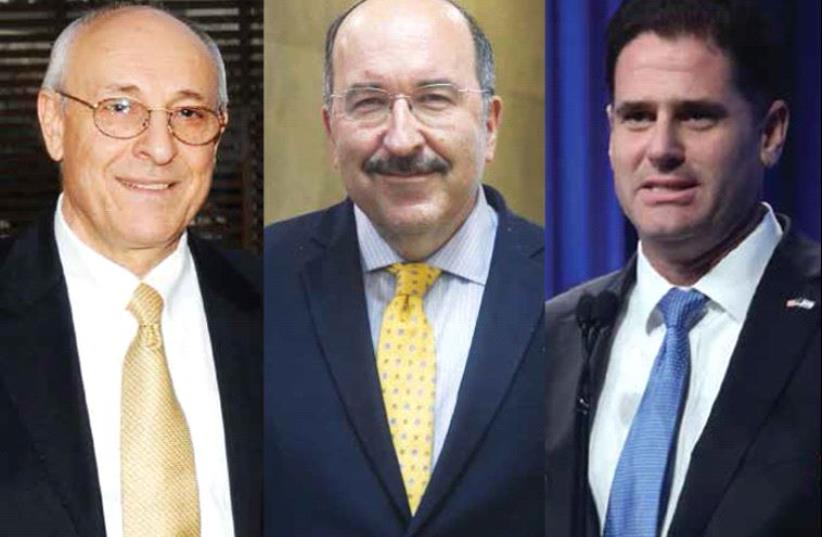 Yitzhak Molcho, Dore Gold and Ron Dermer
(photo credit: MARC ISRAEL SELLEM)
Advertisement
A fine line separates influence from power.Prime Minister Benjamin Netanyahu is powerful. By his word, men are sent to battle, taxes are increased, new laws are initiated.Chief of General Staff Lt.-Gen. Gabi Eizenkot is powerful. By his word, life-and-death military operations are carried out, military careers are advanced or stymied, the conditions facing soldiers are eased or made worse.And Health Minister Ya’acov Litzman is powerful: by his word, the current coalition stands or falls.That is power: the ability to make decisions that affect the lives of many others.Influence is something different. The influential don’t actually make the decisions. Rather, they whisper into the ears of those who do, often directing them one way or the other. It is a subtle difference, but it is a difference.In his nearly 11 years in office, Prime Minister Benjamin Netanyahu has been surrounded by dozens of aides, advisers and ministers who have come and gone, some would say at a dizzying pace.Of them all, three diplomatic advisers have weathered the tumult and stayed by his side. Two of these – Yitzhak Molcho and Foreign Ministry director-general Dore Gold – have been with Netanyahu since even before his first term in the 1990s, and the third – Ambassador to the US Ron Dermer – has been a key adviser to Netanyahu since the early 2000s, before he became prime minister a second time.When it comes to diplomatic matters, these are all the prime minister’s men.Molcho has known Netanyahu the longest, since they were teenagers in Jerusalem in the early 1960s. He is a partner in the blue-chip Jerusalem law firm that for years has represented the Netanyahu family. And he is a man whom Netanyahu trusts completely, which is why the prime minister uses him as his special envoy on the Palestinian issue.The Palestinian issue is a big portfolio with wide ramifications, meaning that in addition to being Netanyahu’s point man with Palestinian leaders, he also deals closely with other governments in the region, in Europe, and of course, with Washington on matters pertaining to the Palestinians.Molcho is not a strategist who sets policy, but rather a tactician who carries it out. But he carries it out so faithfully that when interlocutors speak to him, it is as if they are speaking to the prime minister himself. That has earned him Netanyahu’s complete trust, a trust that means Netanyahu listens carefully to his advice.Another adviser whose advice Netanyahu takes quite seriously is Gold, whom Netanyahu installed as director-general of the Foreign Ministry last year.Gold has been at Netanyahu’s side on diplomatic matters ever since Netanyahu, when he was just a rising Likud star, plucked him from academia in the early 1990s and made him one of his foreign policy advisers, and later his ambassador to the UN.The two men share a common world view, and Gold has been instrumental in recent efforts to build discreet bridges with the Sunni Arab world, as well as in forging ties with Africa. Netanyahu knows that Gold – like Molcho – will never try to upstage him, and will faithfully carry out his instructions. As a result, Netanyahu trusts his advice.And the same can be said of Dermer. Though thousands of miles away in Washington, Dermer has retained a major influence on Netanyahu, speaking to him regularly and, when necessary, flying back to Israel to consult one-on-one.Following Netanyahu’s failure to stop the Iran deal, voices were raised saying that Dermer – who led Israel’s efforts in Washington against the deal – could no longer serve effectively as ambassador and should be replaced.That Netanyahu did nothing of the kind is a testament to the esteem in which he holds Dermer, and his counsel..