Jewish thought and the ‘Pence rule’

Opinions run the gamut on the US vice president’s marriage 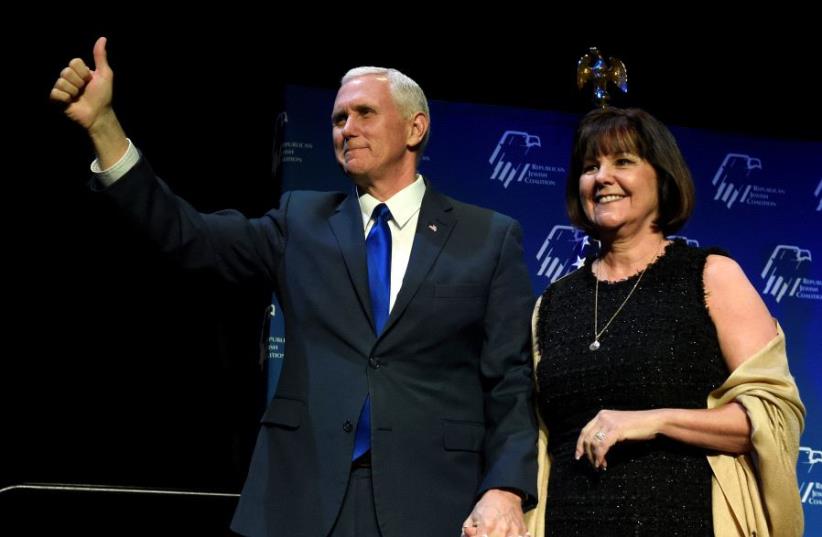 US Vice President Mike Pence, left, and his wife, Karen Pence
(photo credit: REUTERS)
Advertisement
There is one news story that has riled up just about everyone in Washington recently. And it has nothing to do with Russia, Jared Kushner or even President Donald Trump.Nobody can stop talking about a recent Washington Post profile of Karen Pence, the wife of US Vice President Mike Pence. The profile describes Karen as deeply religious, always on the same page as her husband and very socially conservative.But it’s one specific line that set social media alight: “In 2002, Mike Pence told the Hill that he never eats alone with a woman other than his wife and that he won’t attend events featuring alcohol without her by his side, either,” wrote Ashley Parker in the now-famous piece.The Pences did not confirm if the practice is still in place, but it became quick fodder for satire and mockery, and many were angry at what they considered the outdated and damaging beliefs. Reactions quickly split into two camps – those who thought Pence should be admired for safeguarding his marriage, and those who saw him as unable to view women as full professional partners, as opposed to sex objects.Writing for Time magazine, Glennon Doyle Melton said this idea “perpetuates religious and political ideologies based on false, dehumanizing ideologies about women.” She added: “He is perpetuating the patriarchal notion that women are either Mary, Jesus’ pure virgin Mother, or Eve, a temptress, a liability.”
Pence vows US loyalty to Israel during AIPAC speech (credit: REUTERS)
But many commentators also pointed out the parallels between Pence’s purported rules and Jewish law, in particular the laws of yichud, “seclusion.”At its basis, yichud proscribes an unrelated man or woman from being alone in a room together. A man eating a meal with a woman while seated in a restaurant or public space would be permitted under Halacha.Jerusalem-based Rabbi Josh Yuter shared an explanation of the Talmudic laws of yichud with his close to 50,000 Twitter followers. Yuter, who is a member of the Rabbinical Council of America and the International Rabbinic Fellowship, wrote that aside from Jewish law, keeping this stringency “makes good pastoral and professional sense.” He added that the sages “are supposed to act in ways to preempt suspicion, be aware of society.”Writing on the Jew in the City blog, Rabbi Jack Abramowitz of the Orthodox Union wrote, “Even if it’s not one’s personal practice, it’s a behavior that is not considered extremist or crazy,” noting a series of similar measures in Orthodox communities.Rabbi Shmuley Boteach said, “For secular society to mock this, with a 50% divorce rate and 50% adultery rate, simply has no credibility.” He did not cite sources for those statistics.Boteach did note, however, that “in [J]ewish law, men and women who are not married are not allowed to be in a closed and private environment by themselves. Which does not mean that they can’t have lunch or dinner in an open environment.”Some thinkers hit back at the outpouring of criticism directed toward the vice president.Jonah Goldberg writing in National Review told a story about Dr. Abraham Twerski, approached in an airport and berated by a fellow Jew for being a narrow-minded hassidic rabbi. Twerski turned around and said – “You do realize that I’m Amish, don’t you?” and the man burst into apologies.Goldberg used the story to note the presence of “a crude form of partisan bigotry” against religious Christians for behavior common among devout members of other religions.But some Jewish voices had a more critical take on the Pences’ purported marital rules.Rabbi Danya Ruttenberg, an author and spiritual leader who works for the Avodah NGO, criticized Pence for refusing “to be alone with his female colleagues even when they’re just trying to do their damn job.”Judy Mandel, writing on the Jewish parenting site Kveller.com, said the vice president showed his “belief that women are inherently tempting, and not equals who can be met under platonic or business circumstances.”And Phoebe Maltz Bovy, writing in the Forward’s “Sisterhood” blog, said that the answer is “to reduce the place of private dinners and alcohol in the workplace, not to preserve male executives’ marriages (or reputations) at the expense of women’s careers.”