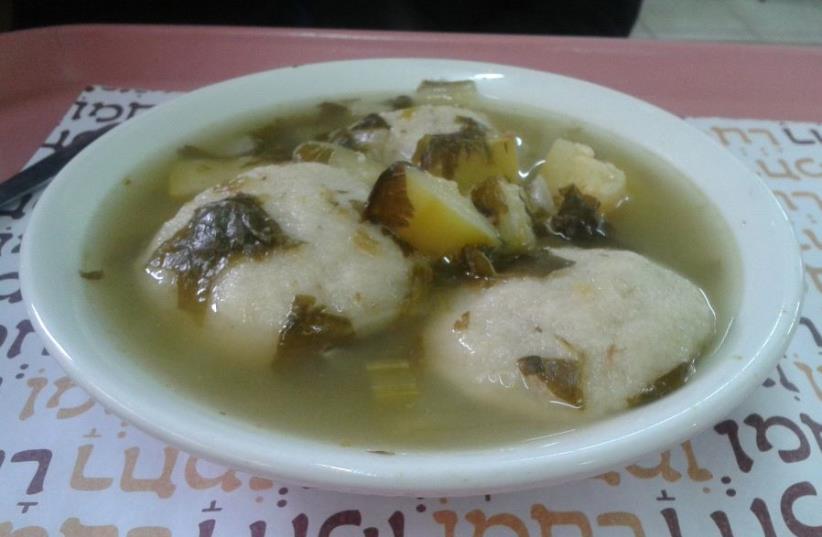 Kubbeh soup
(photo credit: AMY SPIRO)
Advertisement
It may be the height of summer in New York City, but one chef is hoping to entice hungry Manhattanites to dig in to a steaming bowl of kubbeh soup. Kubeh, a new offering from chef Melanie Shurka, is set to open on Saturday, and offer both fried and broth-based versions of the filled dumplings.Shurka, a lawyer turned chef, first discovered the ubiquitous Israeli treat while studying law in Tel Aviv. While she grew up in New York with an Israeli Persian dad and an Ashkenazi Jewish mom, it wasn't until later that Shurka really got to know the Iraqi-Syrian-Israeli dish and all its variants.Shurka - alongside her husband, David Ort - will offer five types of kubbeh and four different broths that draw from the Persian, Syrian, Iraqi and Kurdish roots of the dish. The menu allows diners to mix and match between the different dumpling and broth options, and Shurka believes "there are no wrong choices" (though I wouldn't put a fish ball in a chicken soup, but the choice is yours). There are the common hamusta (sour) and beet broths plus tomato, and beef-, lamb- and mushroom-filled dumplings as well as Persian gondi made from chicken and chickpeas.
The menu also features two versions of fried kubbeh, plus a variety of other Middle Eastern-inspired dishes.Kubeh is far from the first Israeli eatery to pop up in New York city of late - the cuisine is having a veritable moment, even across the US. Famed Israeli chef Meir Adoni opened Nur to much acclaim several months ago. Chef Eyal Shani announced this week that he will open a new branch of his "Hamiznon" chain in Manhattan this fall, and Einat Admony's Taim, Balaboosta and Bar Bolonat (where Shurka previously worked) have been serving up Israeli fare for years. Outside of New York, Michael Solomonov's Zahav and Alon Shaya's Shaya are both popular and critically acclaimed (both have been honored with James Beard Awards). Despite the hunger for Israeli cuisine, July may be a tough time to open a soup-based eatery; hopefully Kubeh will have strong air conditioning in place.