Analysis of this week's Torah portion. 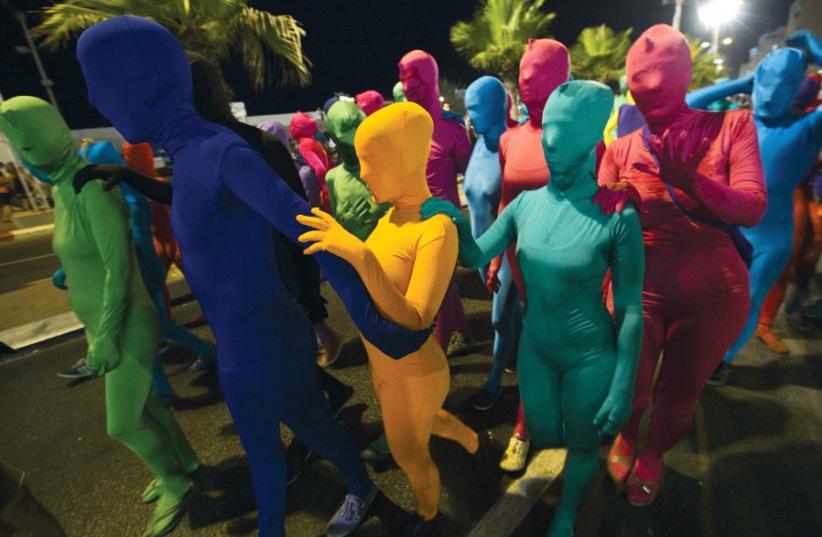 People wear full body costumes (illustrative)
(photo credit: ILLUSTRATIVE/AMIR COHEN/REUTERS)
Advertisement
This week’s Torah portion, Beha’alotcha, tells us about the appointment of the elders. This story did not begin well. The nation that was being nourished by the manna – the Divine food that came down from heaven every morning – started missing Egypt. It remembered the abundance of the Nile, the fish, the vegetables, the varied foods. The manna seemed boring and tasteless.Moses heard the nation crying and complaining and felt he no longer had the strength to lead it on his own.He turned to God and said: “Alone I cannot carry this entire people for it is too hard for me” (Numbers 11:14).God responded with a practical solution: “Then the Lord said to Moses, ‘Assemble for Me 70 men of the elders of Israel… Then they will bear the burden of the people with you so that you need not bear it alone’” (Numbers 11:16-17).These 70 elders would now be partners in leading the nation. They would help carry the heavy burden, take on responsibilities and make decisions. Moses implements what he is told to do. He collects 70 elders and shares his burden with them.This event influenced Halacha (Jewish law) for generations of leadership. The Sanhedrin – the halachic institution that determined Halacha for the entire nation in ancient times – was composed of 71 members because of these 70 elders who shared in leading the nation alongside Moses. We learn this from the words of the Mishna: “The big Sanhedrin was composed of 71. Why was it 71? Because it says, ‘Assemble for Me 70 men of the elders of Israel’ and Moses was with them, bringing it to 71” (Tractate Sanhedrin, Ch. 1) It is interesting to note that contrary to the negative motives for appointing these 70 elders, coming on the heels of the nation’s complaints and Moshe’s despair, the sages of the Talmud see this appointment as an important event, a very significant step in the process the nation undergoes from the Exodus from Egypt until its entrance into the Land of Israel. “The Blessed be He liked the day of the appointment of the elders as much as the day the Torah was given” (Bamidbar Raba, ch. 15).What is the message inherent in the appointment of these elders? What is the great fondness for this day of the elders’ appointment to the point of comparing it to the most historically significant day for the Jewish nation – the day it received the Torah? We may be able to grasp this based on a law brought in the Talmud in the name of Rabbi Yochanan, the greatest of sages in the Land of Israel in the third century.The sages of the Sanhedrin, he said, had to be proficient in “70 languages,” meaning many languages.Why? So that the Sanhedrin would not need a translator.The sages sitting on the Sanhedrin had to hear the issues first-hand. A translator may be able to translate accurately, but there are things he cannot translate: pain, suffering, sorrow, distress… These are things that are hard to convey through another person. The sages had to experience themselves what the person standing before them was experiencing, up close, without human intermediaries. For this reason, the sages of the Sanhedrin had to be proficient in many languages, so they could listen to the person before them, understand his distress and sense his suffering. Only then could they determine rulings for the nation. Only if they were attentive to the complicated humane issues could they correctly determine what the correct decision would be.Moses, the admired leader who received the Torah and conveyed it to the nation, could no longer cope alone with the difficulties the nation was suffering: yearning for Egypt, the boredom of the desert, the difficulty of waiting day after day without knowing for how long… He admitted his inability and therefore God proposed the solution of appointing the elders. In order to comprehend the nation’s distress, the leadership had to have some variety by adding 70 elders, 70 additional opinions, 70 new perspectives. Leadership must be able to contain an array of complexities.This is true for leaders of a nation as well as for every parent. Children need leadership. Children need parents who can take responsibility and make decisions. But parents in their role as leaders must always remember the need to listen, to understand, to contain all the complexities.Only thus can true leadership take place.