The ‘Happy Birthday’ exhibition at the Youth Wing conveys the birthday spirit in a palpable and uncluttered manner. 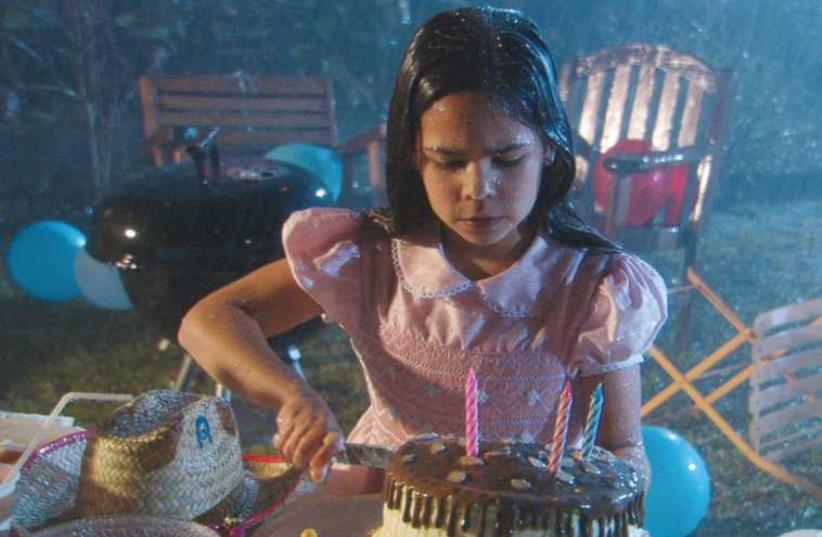 Teresa Hubbard and Alexander Birchler, Eight, 200, HD video, sound, 3:35 min.
(photo credit: THE ISRAEL MUSEUM)
Advertisement
The Queen of England must be one of the luckiest people around. Ever since she acceded to the throne 63 years ago, Elizabeth II has had two birthday celebrations every year – one actual in April, and the other an official gala occasion a few months later.Young visitors to the “Happy Birthday” exhibition at the Israel Museum’s Youth Wing may also get to feel a little like the queen and get a second shot at having some birthday fun.It doesn’t take a degree in quantum physics to tie the new show in with the ongoing 50th anniversary festivities at the museum, although curator Orna Granot says that the junior visitors to the Youth Wing may have difficulty with appreciating the importance of the landmark anniversary.“The last thing that develops in children is the sense and understanding of the passing of time. But the highlight of every birthday celebration is the moment when the child makes a wish for the coming year and blows out the candles. This is the moment when a child connects his past to his present special day and connects it to the future through his wish,” she says.The temporal element appears frequently in “Happy Birthday,” within and as a subtext of plenty of iconic birthday-related exhibits. Visitors to the show are immediately drawn into the celebratory spirit by the balloons hovering high up on the entrance wall and, more dramatically, by a giant-sized birthday cake measuring one and a half meters across.Kids, of course, like to get their mitts on things, and there are interactive and tactile items to be enjoyed as they wend their way past the birthday party table spread with surprise objects. The chronology conundrum is ameliorated, conveyed by a fun interactive gizmo with a tube into which the visitor is invited to blow as a candleextinguishing simulation slot. Instead of the lights going out, the exhaler’s picture is taken by a concealed camera, and a small monochrome portrait quickly slides out of a slot, to be taken home as a gift.The exhibition also takes in the Youth Wing library, which is always a joy to behold; but the recent addition of madcap splashes of color, dots, stripes and youname- it by famed French illustrator Hervé Tullet pushes the fun level up a couple of notches more. There is also some junior contribution to the captivating aesthetics in the library.“Hervé did a workshop here with the Bridging the Gap kids – with Jews and Arabs,” Granot explains. “They painted all over the walls under his supervision. He doesn’t just use the language of dots and circles, etc., and tell children a story; he also does very large collective drawings. He says: ‘It’s energy, and I want this energy here,’” she explains.The result is definitively delightful.The basic premise of the exhibition is to convey the birthday spirit in a palpable and uncluttered manner.“The idea is to offer a more meaningful perspective on the festivities and the participants in the party,” says the curator.“Many of the things we have created for the exhibition are designed to provide the children with a way of looking into, and onto, the things that make up birthday celebrations.”The “Happy Birthday” exhibition also incorporates significant international works of art, such as Nicholas Nixon’s The Brown Sisters a series of 40 photographs of his wife and her three sisters, taken every year between 1975 and 2014.“The annual photo shoot became a tradition of 40 years, creating a new shared special day for the Brown sisters and brings together art and life,” says Granot.The full series of 40 portraits will be displayed in chronological order. Presumably, the older children visiting the exhibition will get some sense from that of the passing of time and how our faces and bodies reflect the advancing years.That may be a sobering concept to digest, but “Happy Birthday” is really about fun and about appreciating that special day on the calendar.“Happy Birthday” is on display until December 26. For more information: (02) 670-8811 and www.imj.org