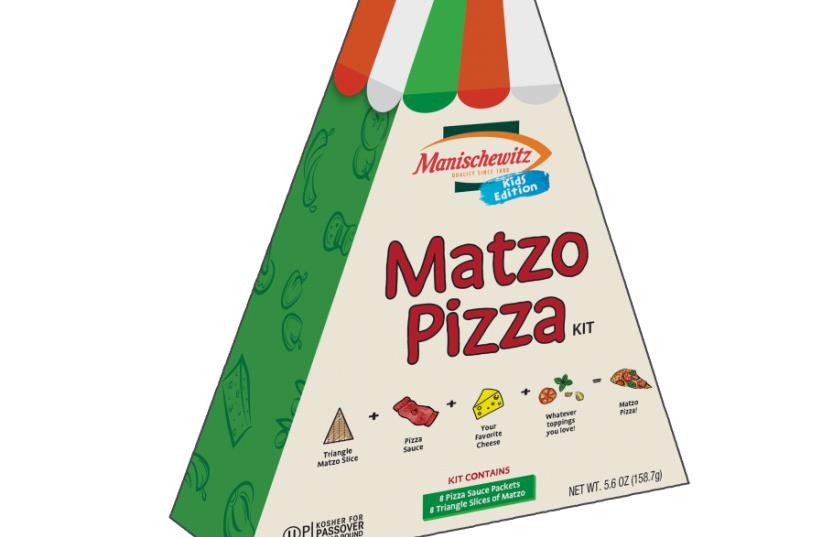 Manischewitz matza pizza
(photo credit: Courtesy)
Advertisement
It’s a common refrain throughout the week of Passover: “There’s nothing to eat!” And at some point, just about everyone of all ages will partake of the classic matza pizza: a piece of matza topped with tomato sauce and shredded cheese, and toasted to bubbly perfection.Although matza pizza is not quite the same as the classic, Manischewitz is hoping to aid in that with the introduction of triangular matza. The new shape, released as part of the company’s “Matzo pizza kit,” also includes packets of sauce (but no cheese or toppings).The kosher food giant is best known for its wine and matza, but also offers a wide range of other products. Manischewitz is thought to have the largest share of the matza market, with Streit’s its biggest competitor.Once the idea for triangular matza was put into action, the company quickly discovered that production methods needed to be tweaked to accommodate the new shape. For example, the tip of the triangle was prone to burning, so the oven temperature had to be adjusted. Plus the new shape led to more breakage, according to plant manager Rabbi Aron Hayum, so instead of the standard cooling conveyor, the matza triangles were hand-transferred by plant employees into cartons to cool.“Matza pizza has become a popular way to break the monotony for kids who have to forego sandwiches [during Passover],” said Manischewitz CEO David Sugarman. “We are allowing them to continue the tradition, just making it a lot more fun along the way.”Manischewitz is also credited with the advent of machin-emade matza and its square shape; before the 20th century, most matza was round and handmade. The new shape reduced waste and also breakage. Of course, switching to triangular matza is likely a reverse in the other direction.