The Torah’s determination to create a law-abiding society is reflected in its repeated warnings of the death penalty. 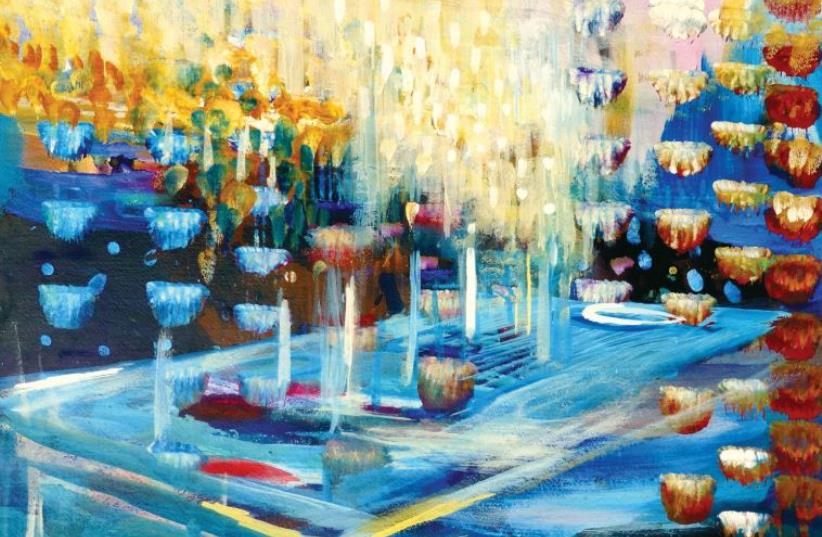 Painting by Yoram Raanan
(photo credit: YORAM RAANAN)
Advertisement
“Six days shall work be done, but the seventh day must be kept holy as a Sabbath of Sabbaths....” (Exodus 35:2)

“Do not light a fire in any of your dwellings on Shabbat.” (Exodus 35: 3) Painting by Yoram Raanan: www.RaananArt.comImagine walking into synagogue. You find a seat and the person sitting next to you looks strangely familiar. As you lean over to greet him, you realize why. He’s the fraudster whose picture has been featured all over the media. His former friends are shunning him, which is why he is sitting alone.Those who avoid him expect their synagogue to uphold the highest ethical standards. They don’t want their children to see criminals welcomed into shul, but the convicted man’s family is also hurting. They swear that he is innocent and as they watch their lives and the lives of their children crumble, they turn to their Jewish community for support.How should we respond to these awkward situations that occasionally occur in our communities? The Torah’s determination to create a law-abiding society is reflected in its repeated warnings of the death penalty. Jewish judicial procedures made it practically impossible to execute someone, and today it is ruled out altogether. Still, the rabbis never stopped theorizing about it; a permanent testimony to how seriously they viewed crime. (Mishna Makkot 1: 10) In this week’s parsha, after instructing the people to keep Shabbat, Moses appears to repeat himself by commanding them: “Do not light a fire in any of your dwellings on Shabbat.” (Exodus 35: 3).The rabbis of the Talmud were troubled by this repetition.One explained that the prohibition of lighting a fire in moshvoteichem (your dwellings) can refer not only to homes, but also to law courts, and the “fire” is a reference to the flames ignited prior to an execution.Capital punishment may not be carried out on Shabbat. (Talmud Yevamot 6b) Explaining the rationale behind this stay of execution, the Sefer Hahinuch (322) says that God wants everyone to rest on Shabbat, even criminals. It can be compared, he says, to a king who held a feast for all his subjects. On the day of the banquet, an amnesty was proclaimed; everyone, even the criminals, joined in the festivities. However, the next day, life returned to normal, the king reopened the courts and criminals were brought to trial. Shabbat demanded recognition of everyone’s humanity, while the need for justice and a stable society demanded justice for the convicts.This idea of divine respite for hardened criminals carries through to a talmudic discussion of how the death penalty might be carried out. In the course of the debate, Rabbi Nahman reminds the rabbis of the command to “love your neighbor as you love yourself” (Leviticus 19: 18). This, he says, means that we must ensure criminals “a good death”; a position universally accepted by his colleagues. Their only question is which takes priority; ensuring a painless execution or minimizing the humiliation for the convict and his family. (Talmud Sanhedrin 45a) Hassidic literature also includes this theme of gentleness and sensitivity for criminals. One story tells of a wanted thief who was protected by the Baal Shem Tov. The hassidic master gradually coaxed him into learning Torah, abandoning his life of crime and becoming a Torah scholar.Retelling the story, Rabbi Shlomo Carlebach quotes the cry of the desperate thief: “Everyone wants to be the rabbi of the righteous, but who will be the rabbi of the thieves?” That line intrigues me. As a lawyer’s son, I have steadfast respect for the law, yet I see that each of God’s creatures is entitled to spiritual support, compassion and guidance.David Haskell Cohen grew up in Calcutta. In his memoir, Angels, Snakes and Ladders, he describes the Bengal famine of 1943, when supermarkets overflowed with fresh produce, but the poor had no money to purchase anything. In just three months, three million of them starved to death.Distressed by his Jewish community’s failure to affect the devastation, Cohen abandoned it for the Communist Party. He edited their journals and rose high within the party ranks. However, a trip to Russia changed everything. The widespread corruption there shattered his illusions.“The Communists of whom I had such high hopes as a youth,” he wrote, “did not have standards or ethics as high as those expected of the children of the Torah.”After such disillusionment, he might have become embittered, but he did not. Returning to Jewish tradition in Jerusalem, he felt that when the sages teach us that we should always give people the benefit of the doubt (Avot 1:6), and the Talmud warns that unfairly suspecting someone is a crime (Shabbat 87a), the rabbis were giving wise advice. We may try to judge people favorably; but in most instances we have no business judging them at all! Rebbe Nahman of Bratslav explains that even those who seem hopelessly hateful have at least one redeeming feature. Our job is not to judge them, but to search for that grain of goodness. With that, we will view the person with fresh eyes, transforming them into a purer person. (Likutei Moharan 282) High ethical standards are the hallmarks of our communities.The law must take its course, and Jews who do wrong must repent, apologize to those whom they have harmed and compensate them for their losses.But empathy and kindheartedness are also Jewish values. None of us is perfect, and who can be sure that they, too, will not succumb to temptation before their dying day? (Avot 2: 5) We do best when we avoid judging others; showing respect and compassion to all. That is why there had to be a day of the week when all Jews – saints and rogues – could rest together.  Shabbat Shalom!The writer is the United Synagogue’s rabbi in Israel. For more about the 9 Adar Project: Jewish Week of Constructive Conflict, go to www.9Adar.org