‘How so can I bear alone your contentiousness and your quarrels?’ (Deut. 1:12) 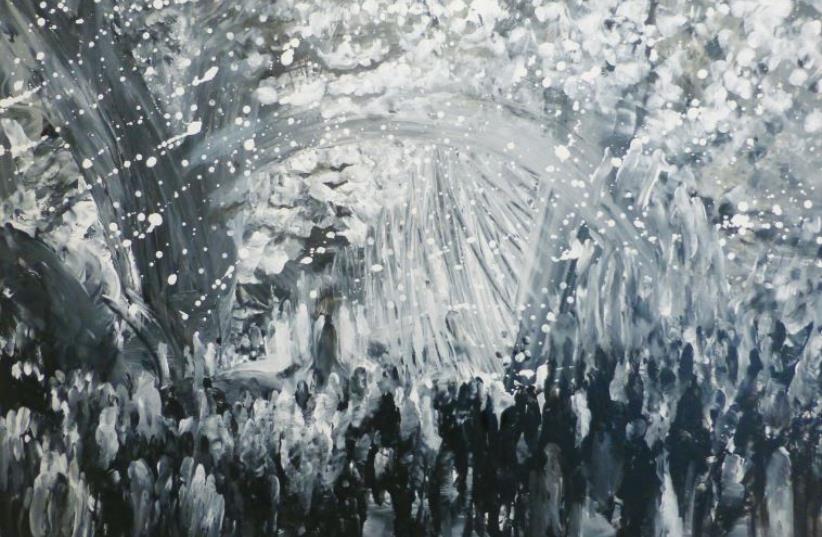 Painting by Yoram Raanan
(photo credit: YORAM RAANAN)
Advertisement
Painting by Yoram Raanan www.yoramraanan.comThe portion of Devarim falls out just before the fast of Tisha Be’av, the day which lives in infamy as the day of the destruction of both of our Holy Temples, the date which started the Spanish Inquisition and expulsion and other tragedies which befell the Jewish people throughout our history. With the destruction of the Holy Temple came the loss of Jewish sovereignty in Israel and the beginning of our 2,000-year-long exile, wandering and persecution which culminated in the horrors of the Holocaust.And so to the sensitive ear of the biblical student of Jewish history and ethics, our biblical portion seems to resonate rather remarkably the underlying causes for the destruction of the Temples; the very same causes which contributed to the failure of the desert generation to enter the Promised Land; the same transgressions which drove Moses to lose patience with his nation and God to grant Joshua the privilege of bringing the next generation into the Promised Land.Just listen to Moses’s retelling the seminal events of the desert experience: “The Lord our God spoke to us in Horeb saying, ‘Enough of your dwelling by this mountain. Turn yourselves around and journey…. See I have given you the land before you. Come and possess the land that the Lord swore to give to your forefathers and to their children after them.’ But I said to you at that time….How so [Eicha] can I bear alone your contentiousness, your burdens and your quarrels?... So I instructed your judges at that time saying: ‘Hearken to the inter-relationship between your brothers and judge righteousness [tzedek] between a person and his sibling or his stranger-neighbor [ger]; do not show favoritism in judgment [mishpat] …. do not tremble before any person [no matter how rich or powerful], for judgment must be rendered before God….’” (Deut. 1:6-17) The opening word in verse 12 of this passage is the same as the opening word to the Book of Lamentations read on Tisha Be’av (Eicha). The Torah reader on this Shabbat chants the phrase with the same haunting melody (cantillation, trope) which accompanies the reading of the Book (or Scroll) of Lamentations.The great sin of the desert generation was the petty internal squabbles among the Jews themselves, their rebellions against Moses, their stiff-necked stubbornness in eschewing the Divine commands.The Israelites insist upon a reconnaissance team to scout out the land, to assess the advisability of conquest, to second guess Moses’s mission and God’s command. Internal strife within the Israelite camp, the lack of righteousness [tzedek] and equitable judgment [mishpat] is what prevented the entry into Israel under Moses’s rule and what caused the destruction of the Holy Temples in later biblical times, as we shall see.You will remember that when God first promised to make Abraham’s seed a nation, and that the Abrahamic nation would bring “blessing to all the families of the earth” (Gen. 12:3), God defines why He chose Abraham: “For I have loved [chosen] him [Abraham] because he commands his children and his household after him… to guard the ways of the Lord, to do acts of compassionate righteousness (tzedaka) and moral justice [mishpat]…” (Gen. 18: 19) Hence if Israel’s God-given purpose as a nation is to convey the ideals of compassionate righteousness and moral justice to all the families of the world (the inviolability of every human being, the inalienable right of every person to be free and not enslaved), it is perfectly logical that if sovereign Israel forsakes these ideals, the Israelites will forfeit their national status.So the prophet Isaiah thunders: “How so has the faithful city [Jerusalem] become a harlot; she who had been full of justice [mishpat], she within whom righteousness [tzedek] dwelt, now murderers…. Zion will lonely be redeemed through justice [mishpat], and those who will return to her, through compassionate righteousness [tzedaka].” Tzedaka means special attentiveness to the “weaker vessels”: the widow, the orphan, the indigent, the cripple and the challenged.When we pray on Tisha Be’av for the restoration of the Holy Temple, what aspect of the Temple are we praying for? Is it for the sacrifices? Listen to the prophet Isaiah, “Why do I need your sacrifices?, says the Lord. I am sated with your whole burnt offerings of rams and the fat of your fatlings; the blood of bulls, sheep and goats I do not desire” (Isaiah 1:11). If the sacrifices were offered in sincere repentance and alongside of ethical sensitivity, they would bring true redemption. But alas, all too often they are a substitute for sincere inter-personal love, they are mere hypocritical indulgences. “Learn to do good, seek justice, vindicate the victim, render justice to the orphan, and take up the grievance of the widow” (ibid. 17). Compassionate righteousness and moral justice, that’s what I want, says our Lord! All of our prophets teach us (Isaiah 2, Micah 4, Zechariah 7, 8, 9) that at the End of Days, at the time that will truly bring the Messiah, the Israelites will restore true judges and righteous counselors, Jerusalem will be called the City of Righteousness (Isaiah 1:26), and then all of the nations will flock to the Holy Temple “to learn from our ways and walk in our paths:” we shall then have become a “kingdom of priest-teachers and a holy nation.” At that time, “nation will not lift up swords against nation and humanity will not learn war anymore (Isaiah 2:3-5). Herein lies the mission of the nation Israel.It is for this, especially now, with a nuclear Iran and a blood-thirsty Islamic State looming on the horizon that we must pray this Tisha Be’av. Shabbat shalom Rabbi Shlomo Riskin is founder and chancellor of Ohr Torah Stone institutions and the chief rabbi of Efrat. His latest book, The Living Tree: Studies in Modern Orthodoxy, is available from Maggid Books, a division of Koren Publishers Jerusalem.