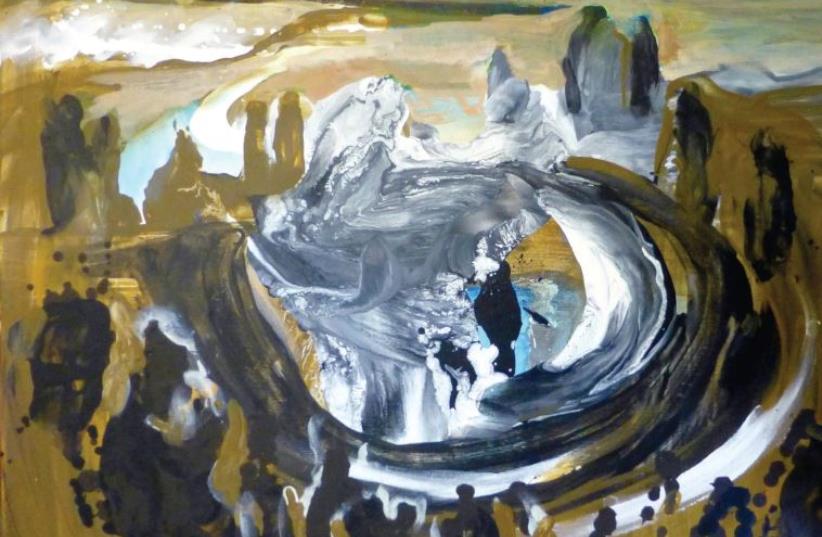 Painting by Yoram Raanan
(photo credit: YORAM RAANAN)
Advertisement
Is controversy a positive or a negative phenomenon? Since the ideal of peace is so fundamental to the Jewish ideal – to such an extent that we even greet and bid farewell to each other with the Hebrew word shalom, peace – I would expect that controversy would be universally condemned by our classical sources. But apparently there is a way to argue and a way not to argue.The Mishna in Avot (Ethics of the Fathers 5:20) distinguishes between two types of controversy: “A controversy which is for the sake of heaven, like that of Hillel and Shammai, will ultimately continue to exist; a controversy which is not for the sake of heaven, like that of Korah and his cohorts, will not continue to exist.”In addition to the problematic issue of the positive description of a “controversy for the sake of heaven,” it is difficult to understand why the Mishna refers to one type of controversy as that of Hillel and Shammai, the two antagonists, and the other as that of Korah and his cohorts, rather than Korah and Moses, which we would have expected.I believe that the answer to our questions lies in the two legitimate definitions of the Hebrew word for controversy, mahloket: Does it mean to divide (lehalek) or to distinguish (la’asot hiluk), to make a separation or a distinction? The former suggests an unbridgeable chasm, a great divide that separates out, nullifies the view of the other, whereas the latter suggests an analysis of each side to give a greater understanding of each view and perhaps even to eventually arrive at a synthesis or a dialectic, a resolution of both positions.This can occur, for example, either by accepting the possibility of both together, one position for one type of congregation (like a Sephardi synagogue) and another for another type of congregation (like an Ashkenazi synagogue); or one type of prayer service in a “beginners’ minyan” (for “newly minted” Jews, ba’alei teshuva), and another type of service for a “frum from birth” minyan, for those fully conversant with the service and adept at “getting through” the entire service; or even one synagogue in which the entire biblical portion was read each Shabbat (as was done in Babylon), and another synagogue in which they preferred the triennial cycle of Torah reading, in which one-third of the biblical portion was read each year along with translations and midrashic explanations to expound upon the Written Text (as was done in the Land of Israel); and such synagogues with differing customs existed side-by-side in the Jewish community of Egypt, until one standard was accepted by all so that everyone could conclude an annual Torah reading on the festival of Simhat Torah.With this understanding, the initial comment of Rashi on the opening words of this Torah portion, “And Korah took,” becomes clear. “He took himself to the other side to become separated out from the midst of the congregation.”Since Korah made a great divide between himself and Moses, the Mishna in Avot defines his controversy as that of Korah and his cohorts; he was interested in nullifying rather than in attempting to understand the side of Moses.On the other hand, when the Talmud describes the disputes between Hillel and Shammai, it decides that: “These and those [both schools] are the words of the living God. If so, why is the law decided in accordance with the school of Hillel? Because they are pleasant and accepting, always teaching their view together with the view of the school of Shammai, and even citing the position of Shammai before citing their own position” (Eruvin 13b).According to this view, “these and those [conflicting opinions] are the words of the living God,” the Almighty initially and purposefully left many issues of the Oral Tradition open-ended to allow for different opinions, each of which may well be correct when viewed from the perspective of the divine. Indeed the Mishna in Eduyot teaches that the reason our Oral Tradition records the minority as well as the majority opinion is because a later Sanhedrin (Jewish supreme court) can overrule the decision of an earlier Sanhedrin, even though it is not greater than the earlier one in wisdom or in number, as long as there is a minority view recorded on which the later Sanhedrin may rely for its reversal of the earlier decision; and most halachic decisions rely on a minority decision in cases of stress and emergency (Eduyot 1:5, Maimonides and Ra’avad ad loc.). In the world of Halacha, minority dissenting views are never nullified; these opinions are also part of the religio-legal landscape, and can become the normative law of the majority at another period in time or even for a different and alternative individual situation within the same period, for congregations with different needs or different mind-sets.It seems to me that with our return to Zion and the ingathering of exiles from so many disparate geographical places and so many different cultural norms, it would behoove the Chief Rabbinate in Israel to be as inclusive as possible in its acceptance of differing legitimate customs as “these and those are the words of the living God,” enabling everyone under this rubric to “eat in each other’s homes and marry each other’s children” (Mishna Yebamot 1, 4).Shabbat shalom Korah, Numbers 16:1 – 18:32, is read on June 20.

Rabbi Shlomo Riskin is founder and chancellor of Ohr Torah Stone institutions and the chief rabbi of Efrat. His latest book, The Living Tree: Studies in Modern Orthodoxy, is available from Maggid Books, a division of Koren Publishers Jerusalem.