Parshat Masei: A journey to a greater goal

As life becomes turbulent around us, we strive to go forward from one point to the next, and from one challenge to another. 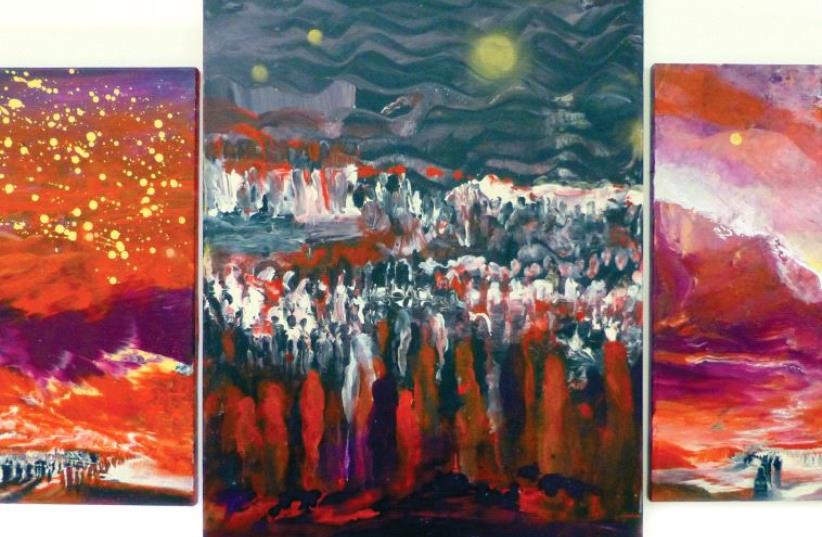 Painting by Yoram Raanan
(photo credit: YORAM RAANAN)
Advertisement
There is a story of a very rich man who was also wise and learned. This wealthy man knew only one person who was wiser than he was – a friend from his youth who was as poor as he was wise.The wise and poor friend would not agree under any circumstances to take handouts from people. He tried various jobs, some lowly and others even worse. He wandered from town to town, living hand to mouth.At no point, though, did he manage to use his incredible wisdom to earn money. The most appropriate description of his circumstances is found in Ecclesiastes: “The wisdom of the poor man is despised.”One day, the rich man decided this had to stop. He decided to do everything he could to take his friend in, take care of his needs and benefit from his great wisdom.However, the rich man knew that there was no chance his friend would agree to live with him, no matter how hard he would try to persuade him. The rich man feared his friend would not even approach him.So the rich man concocted a complicated plan.He sent his emissaries to every town his poor friend reached, and they found a way to make him continue wandering from town to town. In one place, they planted mosquito nests in his home, in another they pressured the mayor to banish him, and in yet another, they sent him a tempting job offer from an adjacent town. In this way, the emissaries succeeded in forcing the poor man to go from place to place, as they gently directed him toward the town of his old friend.It was only when the poor man reached the town of his birth – exhausted and depressed – that his wealthy friend managed to have a heart-to-heart talk with him, persuading him finally that their fates were intertwined, and that the poor man should agree to have his rich friend take him in while his host would gain from his wisdom and advice.What is the message of this story? Our parasha, Masei, concludes the story of the people of Israel’s journeys through the Sinai Desert on their way to the Promised Land. This parasha summarizes the points along the journey and defines the borders of the future land. When the Torah begins listing the places the people passed through, it begins with the following intriguing verse: “Moses recorded their starting points for their journeys according to the word of the Lord, and these were their journeys with their starting points” (Numbers 33:2).Regarding “their starting points for their journeys...their journeys with their starting points” – what is this emphasis trying to show, and why is the order reversed? By phrasing the verse this way, the Torah shows us two perspectives. From the perspective of the people, these were “their starting points for their journeys.”The purpose was the journey, to escape and gain distance from Egypt, and to arrive somewhere else. But from the perspective of Moses, based on God, these were “their journeys with their starting points.” The journey was well planned. Throughout the 40 years in the desert, there was a defined goal. The points along the journey were in and of themselves significant! First came the approach to Mount Sinai and bringing this nation of slaves under God’s wings. Then there was the long process of purification and striving to be a free people in faith and morality in the Holy Land, the Land of Israel.Everyone goes through many stages in life. As life becomes turbulent around us, we strive to go forward from one point to the next, from one job to the next, from studies to investing in our families, from sickness to health, from sorrows to joy, and from one challenge to another.As we strive to get to the next stage in our lives, facing the challenges and hopes it brings, we can suffice with looking back while attempting to escape the problems of the past, searching for solutions, fulfilling desires, and attaining disappointing goals.But there is another option. We can make our perspectives loftier, remembering that from the perspective of the Leader of the Universe, our journey has a significant and sacred purpose, one of coming closer to God, walking in His path, being good to all people, and helping the needy.When we look at our life’s journey in this way, all our lives will shine with the great light of this lofty purpose. The goal will not be escaping the previous stage in life. The goal will be making the most of the journey itself.  The writer is the rabbi of the Western Wall and holy sites. Painting by Yoram Raanan: www.RaananArt.com