When is criticism considered constructive? Only when it leads us to the Promised Land! 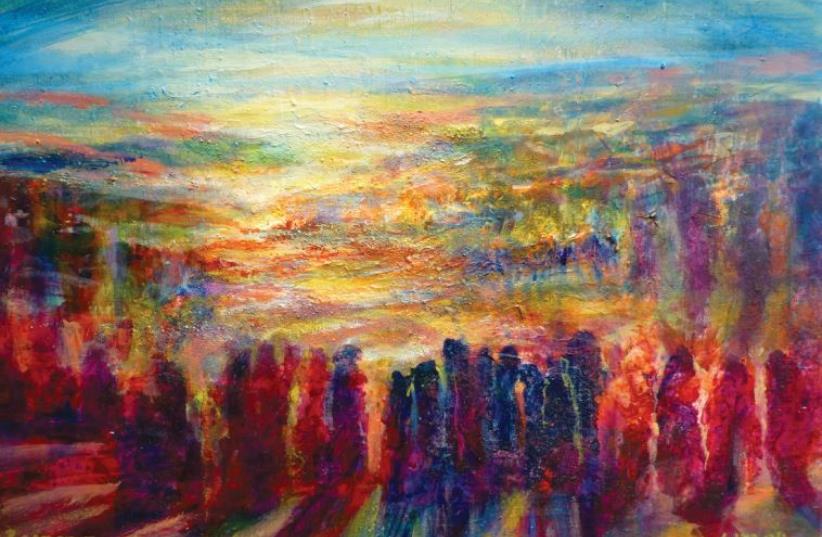 Painting by Yoram Raanan
(photo credit: YORAM RAANAN)
Advertisement
Parshat Shlah: Constructive criticism or defeatism? “The Lord spoke to Moses saying, ‘Send out for yourself men who will scout the Land of Canaan, which I am giving to the children of Israel...They returned from scouting the Land at the end of forty days… They spread an [evil] report about the land that they had scouted. Joshua...and Caleb... spoke to the entire congregation of the children of Israel, saying, ‘The land we passed through to scout is an exceedingly good land.’” (Deuteronomy 13:2, 25, 32; 14:7)Painting by Yoram Raanan, www.RaananArt.comThis week’s portion, Shlah, tells one of the most important stories occurring during the Jewish people’s 40 years in the desert: Am Yisrael was about to enter the gates of the Promised Land. In preparation for this, representatives of each tribe were chosen, and these were sent as spies to explore the land and evaluate it. When they returned, 10 of them expressed completely negative opinions. However, Caleb and Joshua said: “The land is very, very good!” No one argued the facts. The question was about their interpretation. The spies encountered extraordinarily large fruit in the land. They could have seen this as fulfillment of the Divine promise of a “land of milk and honey.” But the spies saw this as a sign that the land is “strange.” During their dangerous exploration, the spies benefited from special heavenly protection.To prevent the locals noticing the spies who intended to conquer their land, Divine supervision made sure to keep the locals busy with tragedies that struck precisely during those days. But the spies interpreted this as though the land had a bad climate and the mortality rates were high. When the spies encountered the terroristic giants, their hearts fell in fear of having to battle them. They forgot all about the many miracles they experienced in the desert, and suddenly entering the land seemed impossible to them.By contrast, Caleb and Joshua projected optimism.They saw the land as good and wonderful. Regarding the giants, Caleb and Joshua trusted the power of the Creator to make miracles happen for them and to fulfill His promise to His people.What caused the spies to speak badly of the Promised Land? How could they have forgotten the many miracles they had experienced so far? Why did the nation accept the negative interpretation to the point of such crying and discontent that they said that God hated them so that He wanted them to enter a death trap? Looking back at the chronology of events will provide the answer to these questions.The exodus from Egypt was intended for one clear purpose: for the nation to become the “chosen people” – “a kingdom of kohanim (priests) and a sacred nation.” Yet even while they were still camping at the foot of Mount Sinai – the site of the covenant between them and the Creator – they already committed the serious sin of creating the Golden Calf. In addition to this, they had other transgressions that gave them a sense a failure. They saw themselves as sinners unworthy of the miracles and the land that had been promised to their forefathers. Therefore they were very afraid of the giants, to the point of thinking they needed to persuade the nation not to embark on this dangerous adventure, even if doing so meant they had to twist the truth and slander the land they saw with their own eyes as the “land of milk and honey.”Caleb and Joshua saw things differently. They did not minimize the people’s crime and punishment, but they remembered that these sins were not committed due to a desire to rebel against God, but that their yetzer hara (evil inclination) caused them to sin from time to time. Despite this, the people’s essence and intent were good, and their desire to fulfill God’s will was strong and solid. Therefore, they were still worthy of His salvation. This optimism is what allowed Caleb and Joshua not to get confused but to see the facts clearly.Seeing the attitude of the spies and the nation as stemming from self-examination and repentance, it could be interpreted as an act of lofty catharsis. Why, then, were they criticized so harshly, with God ultimately swearing that the entire generation would die in the desert and not merit seeing the land? Criticism and examination, though possibly positive and necessary, can also be negative and destructive.How can we differentiate between them? The answer is in the result. This is what we learn from the story of the spies. Their mistake was that their self-criticism did not lead to a process of repair and growth.On the contrary, it led them to incapacity, insularity, despair, and slander. It did not lead them to consult with one another on how to improve their actions and become closer to God. This is not criticism, this is defeatism.When is criticism considered constructive? Only when it leads us to the Promised Land! The writer is the rabbi of the Western Wall and holy sites.