The strange case of the mezuzah, Elie Wiesel and Rabbi 'Miki' Mark

July 2 made for one of those moments when real life is “stranger than fiction.” 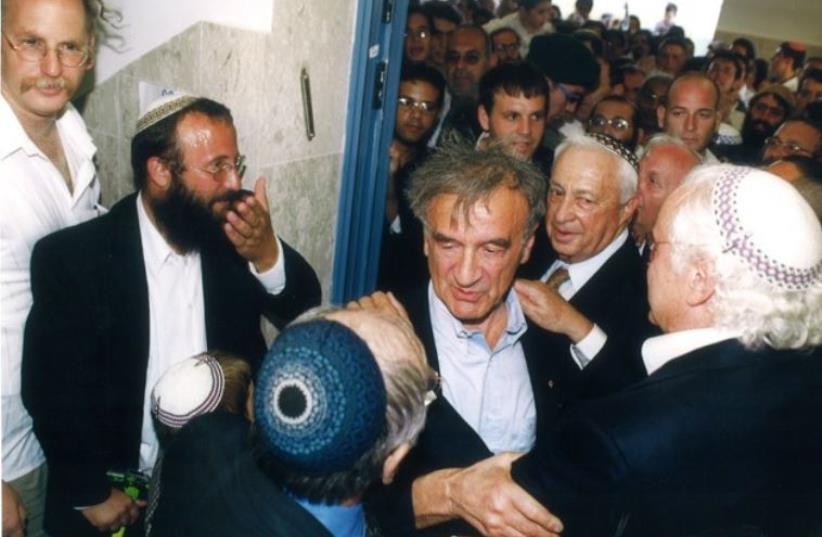 Elie Wiesel attends dedication ceremony at Otniel Yeshiva along with Rabbi Michael “Miki” Mark and Ariel Sharon
(photo credit: HAR HEBRON TORAH COUNCIL)
Advertisement
“God made man because he loves stories,” the famous Nobel laureate Elie Wiesel often stated in his speeches.So it is, that the July 2 date of his death, made for one of those moments when real life is “stranger than fiction.” It linked a man who had met with presidents and kings, with an Israeli teacher and administrator Rabbi Michael “Miki” Mark, who was killed in a terror attack just one day earlier in the South Hebron Hills region of the West Bank.On the surface of it, that sun baked stretch of the small gray asphalt road, where Palestinian gunmen shot Mark to death as he drove with his wife and two of his kids, seems worlds away from the international hub of Manhattan, where Wiesel lived and died.It is a mostly barren and desert stretch of the West Bank, that hugs a similarly isolated part of the Negev.Beersheba is already off the beaten path for many tourists who never make it beyond Tel Aviv and Jerusalem. So foreign visitors, certainly ones of Wiesel’s stature, are almost like a rare species.That description rang even more true almost two decades ago, in 1999, when the head of the Otniel Yeshiva, Rabbi Beni Kalmanzon, and Mark, the school’s director-general, were in the midst of planning a dedication ceremony for their new stone building with its sunny open sanctuary.Mark, who was also Kalmanzon’s brother-in-law, had raised the bulk of the funds and had overseen the project. To their surprise, one of the main donors informed them that he planned to bring as his guest none other than Wiesel.“I am a small person, he was a man of the greater world,” Kalmanzon told The Jerusalem Post on Wednesday.“I would never have imagined that we could even invite Wiesel to come to us from the US,” Kalmanzon said.As the son of a Holocaust survivor and a historian, Kalmanzon had long admired Wiesel. “He has been an important figure in my life,” Kalmanzon said.Wiesel was not a political man, but he seemed to appreciate the significance of their school and the event which they were marking, Kalmanzon said.Wiesel told them that as someone whose world had been destroyed by the Holocaust, he was happy to know Judaism was flourishing once again in Israel, Kalmanzon recalled.The famous author was among the people who hammered the mezuzah onto the doorway of the new sanctuary and study hall for the Otniel Yeshiva.After the death of both men, three photographs from that dedication ceremony surfaced and were circulated on social media.In all three it is possible to see Mark and Wiesel standing next to each other. In two of the shots, one can see Ariel Sharon, who was later the prime minister of Israel.In the fog of grief that has enveloped Kalmanzon since Friday, he noted that Wiesel had died.Like many of those who know of the photographs, and or remember the presence of both men at the ceremony, he was struck by the way the lives of Mark and Wiesel had intersected, not once, but twice.It is “interesting,” he said that the man who was responsible for the construction of the yeshiva building and the guest who arrived, “died so close to each other.”Wiesel was a significant figure, and the seminary, which now houses over 350 students, has also become a significant institution among the Hesder yeshivas in Israel, Kalmanzon said.As terrible as the terror attacks have been, Kalmanzon said, he would never equate them with the tragedy of the Holocaust in which six million Jews were killed.And yet, he could not help thinking of the nature of Jewish fate, that binds the Jewish people together through time and space.