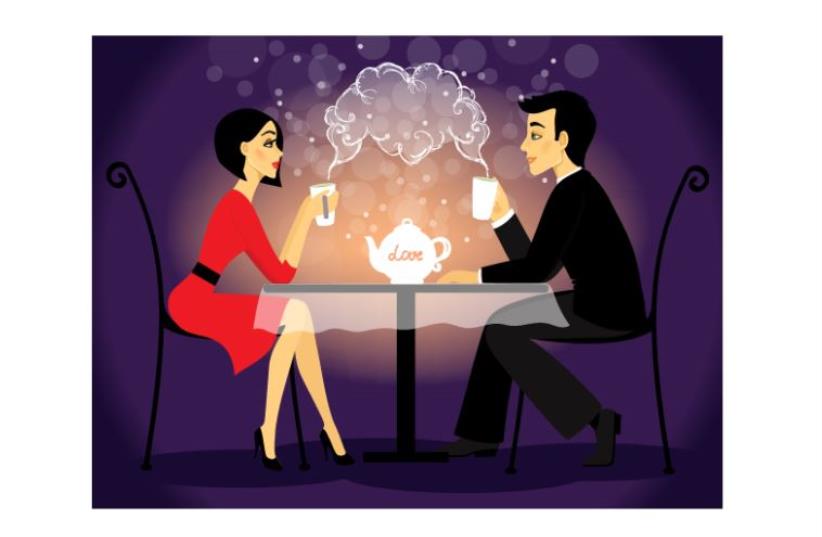 A couple on a date
(photo credit: ING IMAGE/ASAP)
Advertisement
Dear Ladies,I’m a recent olah, single, and new to the Israeli dating scene. Could you shed some light about dating standards in your respective communities? Are there expectations that differ from dating etiquette in the States? What’s the protocol here? Advantages and disadvantages?
Thanks.
Wanting to Marry Jerusalem Tzippi Sha-ked: It started as a casual conversation. “Mazel Tov on your daughter’s upcoming nuptials,” I said. “How long have you known the groom?” “Why, I’ve only just met him,” replied my friend.“In some national-religious circles today, parents meet the prospective spouse for Shabbat or a dinner shortly before the engagement is announced. Kids nowadays keep things private.”It’s a funny thing, these new dating norms. There’s a checklist: Shomer negia (refrains from physical contact, in accordance with the Halacha)? Short skirt? Long skirt? Gush Katif look? Davening with/without a minyan? Kippa? What size? In the national-religious crowd, everyone is fair game for shadchan duties: moms, friends, siblings, rabbis, teachers, Internet dating sites and bona-fide matchmakers. The buzz: Don’t wait too long to start dating (you’ll miss the love boat), don’t date for too long, don’t invite guy/gal for a Shabbat unless you’re almost ready to “announce” – you don’t want people to talk.Parents provide input when helping kids choose a car, a career, a vacation – but God forbid they meet the date in the early stages of a budding relationship.That’s simply not done.National-religious kids are brought up with less contact with the opposite sex than secular youngsters.They do mix in youth groups, at family gatherings and on Shabbatot. They attend single-sex schools and date only to wed. Often, it’s not until university that they mix more naturally with the opposite sex. And then – boom! – genetic testing, PR campaigns for girls. Parents: Please butt out – until the bills arrive.Does this have to be the new norm? Tzippi Sha-ked runs Points of Contact, a matchmaking network for Anglo-Israelis.Pam Peled: I suppose the most sensible thing to say about dating rules in the secular community is that there aren’t any. Presumably what you’re really asking is: How soon do you spend the night with your date? There are books about this, no? How long to wait before texting back; what to talk about at the first meeting; how to say “Sorry, this isn’t working out” in a non-hurtful way (impossible).But the bottom line is that in the nonreligious world, the whole scene is far more flexible, more go with the flow.The crux of the question is: which dating patterns ensure better, stronger, more lasting relationships? Does sleeping over at your boyfriend’s house mean he’ll marry you sooner and stay true, or does it mean the opposite? Or does it mean absolutely nothing at all? Oh, relationships. I assume, though I’m open to correction, that dating patterns make no difference to longterm happiness. Some data claim that prenuptial cohabitation is poisonous to eventual marriage; other data prove that living together leads to happy ever after. Terrible spousal abuse exists in all the worlds, as do wonderful marriages of respect.For sure, this casual attitude to coupling in the secular world has its problems: It’s not nice to feel dumped after a night of fun. But is it better to forgo the fun, or get married at 20 because that’s the only legitimate way to welcome someone into your bed, and does this lead to more loving, respectful, non-abusive, long-term lives together? My gut feeling is no.Danit Shemesh: Much as I love my husband, I wouldn’t wish our beginnings on our daughter. Being haredi, she had a diametrically opposed experience from the then-secular me.I met my husband in an Israeli dance club, without my parents knowing; my daughter met her “missing piece” in a hotel lobby. We, her parents, set up the date after researching the compatibility of the young man on all levels. Our son okayed the couple’s suitability.I knew nothing about my husband except for the way he looked and moved (great dancer!); my daughter knew almost the whole résumé except for his looks.It took us over a year to decide to marry; my daughter knew after seven dates.The first date confirmed primal attraction; what’s on paper isn’t enough. The second date examined if she could be herself with the guy. On the third they discussed homogeneity in terms of building a home together. They talked a few times about their mutuality, potential for harmony in dialogue, spiritual endeavors and emotional capacity. Can this personality “cocktail” work? My heart was like a slab of meat on a butcher’s stone; hers was protected. My process began with first engaging the body, then the heart and, much later, the mind. In our community there is no touching whatsoever before marriage. The mind decides, the body agrees and only then the heart is allowed to open.Marriage presumes maturity, as does the process of finding the mate.The only drawback is the lack of romantic trappings before the huppa.Comments and questions: [email protected] www.facebook.com/3ladies3lattes