One Jewish high school graduate decided to make graduation special, and the internet is loving every moment of it. 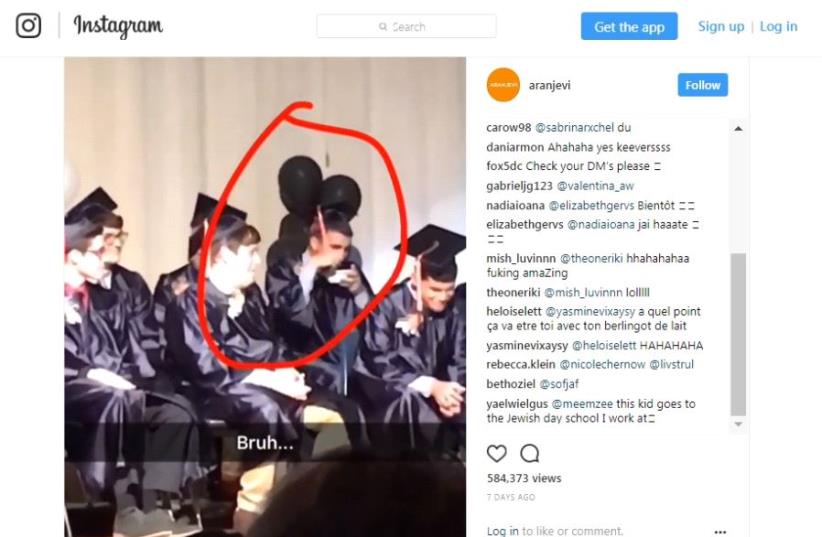 Jewish high school graduate's prank at graduation ceremony goes viral ‏
(photo credit: screenshot)
Advertisement
High school students pulling pranks is a tradition as old as time. But one Jewish teen has gone viral after a stunt he pulled during his graduation ceremony last week. Akiva Glashofer was handed his diploma from the Melvin J. Berman Hebrew Academy last Monday. But he wanted to leave more of a personal mark on the ceremony. So, while seated on stage, Glashofer pulled out a box of Honey Nut Cheerios, a bowl, a spoon and - of course - milk. He started munching on his healthy snack as his friend, Roey Herzfeld, filmed the whole thing. "Akiva is definitely known to have a good sense of humor and always makes people laugh," Herzfled told the local Fox5 news station. "So it wasn't such a surprise to me that he would try to make graduation more exciting."The video, uploaded to the Instagram account AranJevi, has received more than 580,000 views, and more than 700 comments.

Luckily the station reported that Glashofer's parents weren't mad at the stunt. And neither were Herzfeld's. In fact, Herzfeld's father, Rabbi Shmuel Herzfeld of the Ohev Shalom Synagogue in Washington, posted an article about the stunt on Facebook, saying "Great stuff. We all need a smile... thanks Roey for videoing it and sharing it with the world!"