Melania and Ivanka: Hats, veils and no headscarves

IN PICTURES: From Riyadh to Jerusalem to the Vatican, the two Trump women have been combining fashion and religion. 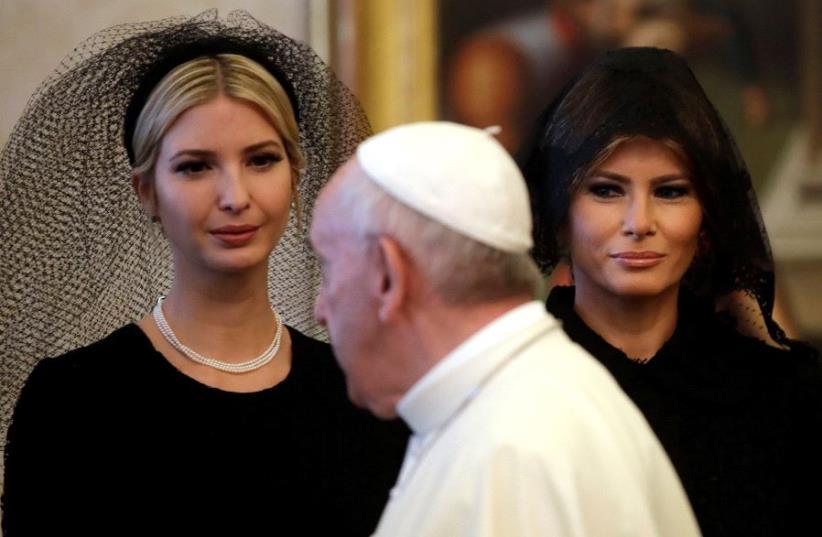 Pope Francis walks past Ivanka Trump (L) and First Lady Melania Trump during a private audience at the Vatican, May 24, 2017
(photo credit: REUTERS)
Advertisement
There is undoubtedly an intense level of scrutiny surrounding US President Donald Trump's first foreign trip. But the women accompanying him - most prominently his wife, Melania, and his daughter Ivanka - have also received plenty of attention for what they chose to wear - or not wear. The first three stops on Trump's whirlwind world tour have included visits to sites and meetings with figures in the three major monotheistic religions: Islam, Judaism and Christianity. And with such stops, the modesty and attire of the women accompanying Trump have certainly come into play. From Riyadh to Jerusalem to the Vatican, Melania and Ivanka have mostly played it safe in their clothing choices.Neither Melania nor Ivanka wore a headscarf during their time in Riyadh. Though Saudi law requires women to cover up in public, including their hair, foreign officials are not bound to the rules, and first ladies Michelle Obama and Laura Bush also went with their heads bare on official visits. Though at the time of the Obamas' trip, Trump tweeted criticism of Michelle's decision - "they were insulted. We have enuf [sic] enemies" - Melania still went without.

Honored by the warm welcome we received in Riyadh from King Salman and his family. #POTUSAbroad pic.twitter.com/GuinMfE1QH

Despite the oppressive heat in Riyadh, both of the women were decidedly covered up on the trip. Ivanka wore a long-sleeve, ankle-length and high-necked floral dress on day one, and a modest pantsuit on day two. Melania arrived in a floor-length billowing black pantsuit, and also sported a pink ballgown, a knee-length khaki dress and a white pantsuit with a black turtleneck. Both women had their arms covered at all times.
US first lady Melania Trump (2nd R), Secretary of State Rex Tillerson (R), Ivanka Trump (L) and her husband, White House senior advisor, Jared Kushner (2nd L) take their seats before US President Donald Trump delivers his remarks to the Arab Islamic American Summit in Riyadh, Saudi Arabia May 21, 2017 (Reuters)

What a wonderful visit to #Riyadh where I met amazing women & children. Thank u to @KingSalman & the people of #SaudiArabia. pic.twitter.com/T9DTw8GnC0

The pair kept up the trend arriving in Jerusalem - Melania in a white knee-length pantsuit (with a lower neckline than anything she sported in Riyadh, but still modest) and Ivanka in a long-sleeve blouse and duty-length skirt. The pair kept the same outfits on to visit the holy sites later than day - the Church of the Holy Sepulchre and the Western Wall.

Thank u @IsraeliPM & Sara Netanyahu for your warm hospitality. Such a beautiful country with rich history & wonderful people. #Israel pic.twitter.com/nwQUGJi2mk

Ivanka, notably, arrived in Tel Aviv in a navy-blue hat that she wore the entire day - including to the Western Wall . Trump's daughter, who converted to Orthodox Judaism in 2009, has been spotted several times wearing head coverings to synagogue in the US.
Jared Kushner (C) and Ivanka Trump (2R) take part in a welcome ceremony upon the US Presidents arrival at Ben Gurion International Airport in Tel Aviv on May 22, 2017 (MANDEL NGAN / AFP)
FIRST LADY Melania Trump stands at the Western Wall (Reuters)
Ivanka Trump at the Western Wall (Reuters)
At dinner Monday night with the Netanyahu family, Melania wore a floor-length black gown with sheer, lacy sleeves.
US President Donald Trump, first lady Melania, Prime Minister Benjamin Netanyahu and his wife Sara in Jerusalem May 22, 2017 (Reuters)
On the family's second day in Israel, which included a visit to Yad Vashem, Melania opted for a sleeveless, knee-length white dress, while Ivanka also went with a white, in a modest long-sleeved lace dress.

As we remember this dark time in history of human suffering, let us recommit to never forget the lessons of the HolocaustMandel Ngan, AFP pic.twitter.com/JpmrNa3Iwa

Without a skipping a beat, the First Family then set off for Rome, where they met Wednesday at the Vatican with Pope Francis.

There the two women both stuck close to tradition, wearing very modest all-black ensembles, and donning black veils. The Vatican dress code requests that women wear black and cover their hair with the traditional mantilla. Melania opted for a closely-cropped veil, while Ivanka chose a larger, airier look. Former first ladies Obama and Bush also wore black veils during meetings at the Vatican.
Pope Francis walks past Ivanka Trump (L) and First Lady Melania Trump during a private audience at the Vatican, May 24, 2017 (Reuters)
German Chancellor Angela Merkel did wear all black when she met Pope Francis at the Vatican, but she opted to go without the veil. With the Trumps heading next to Brussels and then Sicily, it is likely the women will get to lighten up a little in the wardrobe department, with more bare arms and more colorful looks.