From uses for leftover matza to stand-up acts about the Seder and Jake Gyllenhaal, these clips will get you through a week without bread. 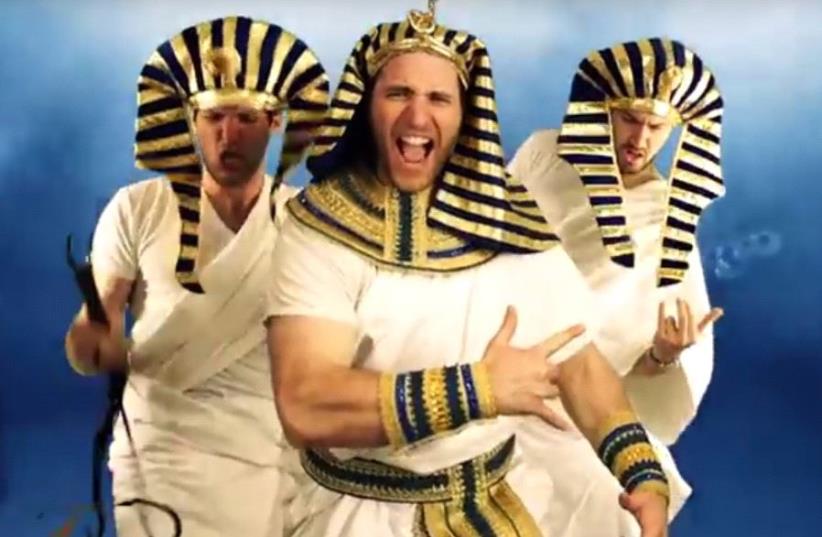 Still from the Maccabeat Dayenu video
(photo credit: screenshot)
Advertisement
When it comes to the Jewish holidays, nothing seems to get people in the spirit like a viral video. Over the years, a wide range of songs, dances and experiments have brought a little magic - and a lot of laughs to Passover. While Hanukka and Purim usually get the most attention as the more fun holidays, there are still plenty of videos to discover about Passover. Here, in no particular order, are 10 of the best videos the Internet has to offer on the topics of matza, the Seder and everything in between.  1. The Technion tackles Passover

You know if the Technion is involved, things will be impressively executed, and this video is no exception. In an intricate setup, students use a series of domino effects to tell the Passover story, from the burning bush to the ten plagues and the splitting of the sea. Nothing like a little nerd power!2. Dancing through the Seder with the Maccabeats It's almost hard to have a Jewish holiday without a Maccabeats video. And they don't disappoint when it comes to Passover, with a modern twist on the classic Seder night song Dayenu. Featuring multiple costume changes, several scenery switches and a wide range of tempos, the boys in the band get even the most tired people at the Seder table bopping around. 3. A Hollywood afikoman What could make eating matza all week a little more tolerable? If anything can, it's definitely Jake Gyllenhaal. This classic Shalom Sesame clip features the Hollywood heartthrob hiding his afikoman so expertly that even he can't find it anymore. 4. Leftover matza? It's a problem just about everyone who celebrates Passover is familiar with: What do you do with all that leftover matza? Well in this video from an impressive nine years ago, William Levin and Michelle Citrin sing about the 20 things they dreamed up for their stockpile of matza - from frisbee to coaster, bookmark and everything in between. 5. Got the Passover munchies? One of the most challenging parts of Passover is of course learning to cook without any hametz. So the duo behind "Bubala Please" have some recipe selections - for those who aren't too sensitive to salty language. But making stuffed matza balls and a gefilte fish taco with the two gangstas is really too good to pass up. After all, who doesn't put Cristal in their haroset? 6. Italians, Jews and bread Passover is one of the Jewish holidays that has pretty much seeped into US pop culture. So it's no surprise that comedian Sebastian Maniscalco included a riff on the Passover meal in his stand-up routine. And pretty much anyone can relate to discovering that, upon sitting down at the table, instead of eating, "we read for two hours?!" 7. 21st century Exodus

It can be tough to get people to sit through the entire Passover story on Seder night. So Aish.com produced a modern take on the tale for 21st century viewers, telling the Exodus story through Skype, Google Maps, Facebook, YouTube, Amazon, Twitter and Craigslist! And all in just over two minutes. I'll drink to that!8. A funky Passover While the acapella group Six13 has been creating Passover videos for the past five years, none have been as popular as their "Uptown Passover" parody from 2015, which puts a twist on Bruno Mars's "Uptown Funk." With catchy lyrics like: "Seder tonight and we saved you a spot/ Don't be slavin', just nosh," you'll be singing along in no time.

9. Frozen in Egypt Unless you were living under a rock in 2013, there's a good chance you've not only seen the film Frozen, but know most of the words to the movie's most popular songs. That's what Ari Blau and Chris Albright were hoping with their parody of "Let it Go," which turns it into a plea from Moses to Pharoah: "Let Us Go." 10. Coming home to Ein Prat The students at Midreshet Ein Prat in a settlement outside Jerusalem have probably the most perfect setting for their Passover-themed video: The desert. In a mash-up of two unlikely songs - Diddy's "Coming Home" and Cee Lo Green's "Forget You," the student singing group - calling The Fountainheads toil in the desert before splitting the sea and making it to the promised land.Honorable Mention: Ok so it's not really a Passover video. This star-stuffed fund-raising pitch for the American Jewish World Service features celebrities from John Mayer to Susan Sarandon, Sir Patrick Stewart, Tracy Morgan, Helen Hunt and more. But if you skip to the very end, you can watch Gilbert Gottfried eat matza like he's cookie monster. And if that's not what Passover is all about, then what is?