Sodor? Mayim Bialik and Kristian Nairn star in new SodaStream commercial ahead of long-awaited GOT return. 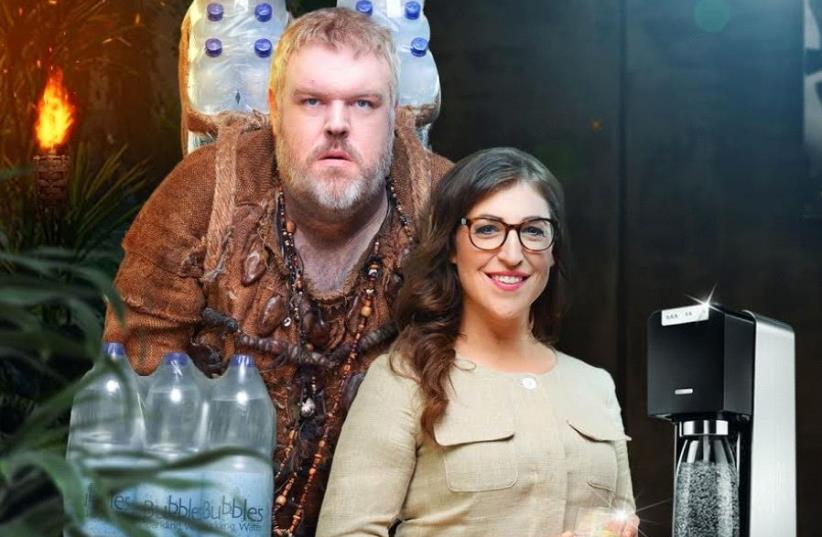 Mayim Bialik and Kristian Nairn star in new SodaStream commercial.
(photo credit: PR)
Advertisement
Scarlett Johansson, Paris Hilton and now - Mayim Bialik. Israeli company SodaStream launched a new ad campaign on Wednesday starring Bialik, best known for her role in The Big Bang Theory, and actor Kristian Nairn, from Game of Thrones. In the clip, which was filmed in the Ukraine, Bialik plays a scientist in the year 2136 investigating the last remaining tribe of "homoschlepiens." The tribe, she explains to a group of children visiting "The Museum of Unnatural History," only drink water or soda that come in plastic bottles. The commercial, of course, is meant to push SodaStream's products - a line of home-carbonation systems, reusable bottles and flavor syrups. "It actually feels really nice to be part of a campaign that has such a strong emphasis on the environment and on reducing our impact," said Bialik, who plays a scientist on TV and also has a PhD in neuroscience in real life, in a behind-the-scenes video. "I think especially to be able to do that in a playful way is really important."Bialik is the latest in a line of Hollywood actresses to star in a campaign for the company. Johansson and Hilton have previously teamed up with the Israel-based corporation."The 'homoschlepiens' video was meant to show how primitive it is to drink from polluting disposable plastic bottles," said SodaStream CEO Daniel Birnbaum in a release. "It's easier and more cost-effective to enjoy fresh soda made at home with tap water than to pollute the environment." The video is not currently slated to air on TV, but rather to be shared online and on digital platforms. It is not the first time the company has made an attempt at viral video content. Earlier this year, SodaStream launched a video in conjunction with Hilton and The Weizmann Institute timed for April Fool's Day, garnering more than half a million views on YouTube. That may seem like a lot, but the company's 2013 Super Bowl ad, which was banned from airing during the game because it featured Pepsi and Coca Cola, has more than five million views online. SodaStream is clearly banking on the stars of two very popular TV shows to garner more significant buzz. The company, which is headquartered in Lod, has been a popular target of a variety of boycott efforts over the years. When Johansson was the company's spokeswoman, she was forced to resign from her role at the OxFam charity over her endorsement of the company. Last year, SodaStream closed its factory in Ma'aleh Adumim in the West Bank and relocated to Lehavim in the South.Bialik- a distant relative of Yiddish poet Hayim Nahman Bialik, has long been an outspoken proponent of Israel on social media, where she has close to 1.5 million followers.