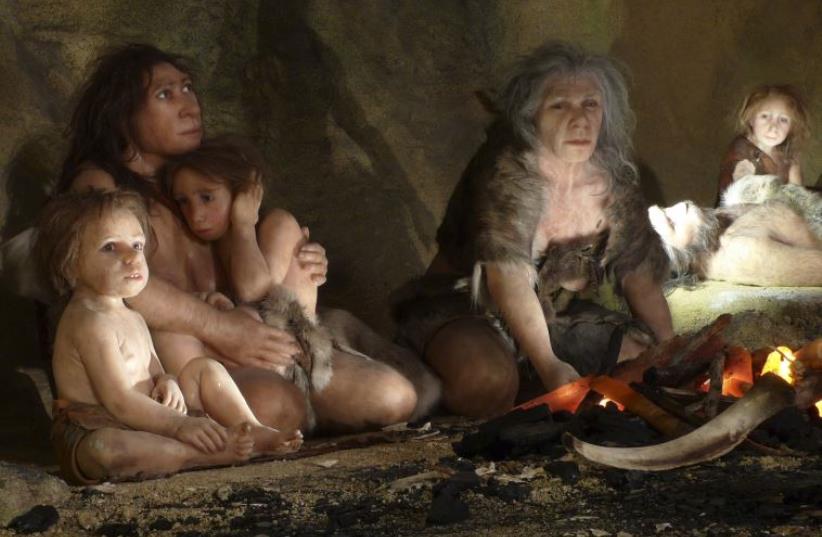 An exhibit shows the life of a neanderthal family in a cave in the new Neanderthal Museum in the northern town of Krapina
(photo credit: REUTERS)
Advertisement
A study led by Prof. Ran Barkai and Dr. Miki Ben-Dor of Tel Aviv University concluded that humans have been apex predators for approximately two million years in a paper published in the Yearbook of the American Physical Anthropology Association.They were able to do this by reconstructing the nutrition of humans dating back to the Stone Age. What exactly did our ancestors eat during those times? The researchers reported that they ate mostly meat. They also concluded that at the end of the Stone Age, humans only gravitated towards vegetables within their diet due to the decline of animal food sources, leading them to domesticate both plants and animals. "So far, attempts to reconstruct the diet of Stone Age humans were mostly based on comparisons to 20th-century hunter-gatherer societies," Ben-Dor said. "This comparison is futile, however, because two million years ago hunter-gatherer societies could hunt and consume elephants and other large animals, while today's hunter-gatherers do not have access to such bounty. The entire ecosystem has changed, and conditions cannot be compared."The research also showed that humans specifically hunted large- and medium-sized animals with high fat. "Hunting large animals is not an afternoon hobby," Ben-Dor said. "It requires a great deal of knowledge, and lions and hyenas attain these abilities after long years of learning. Clearly, the remains of large animals found in countless archaeological sites are the result of humans' high expertise as hunters of large animals. "Many researchers who study the extinction of the large animals agree that hunting by humans played a major role in this extinction – and there is no better proof of humans' specialization in hunting large animals," he said. "Other archaeological evidence – like the fact that specialized tools for obtaining and processing vegetable foods only appeared in the later stages of human evolution – also supports the centrality of large animals in the human diet, throughout most of human history.""Our study addresses a very great current controversy – both scientific and non-scientific," Barkai said. "Our study is both multidisciplinary and interdisciplinary. We propose a picture that is unprecedented in its inclusiveness and breadth, which clearly shows that humans were initially apex predators, who specialized in hunting large animals. "As Darwin discovered, the adaptation of species to obtaining and digesting their food is the main source of evolutionary changes," he said, "and thus the claim that humans were apex predators throughout most of their development may provide a broad basis for fundamental insights on the biological and cultural evolution of humans."