WATCH: Missiles are no match for Schnitzel the Cat 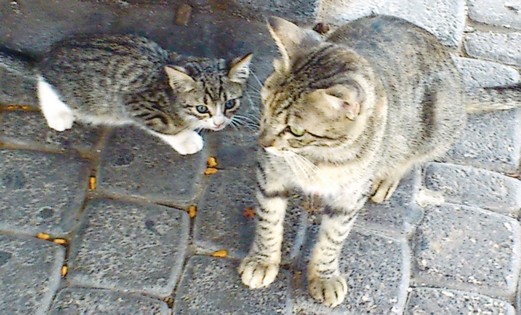 A cat managed to escape unscathed after missile shrapnel fell directly on his tree Sunday afternoon. The shrapnel was the result of the Iron Dome Missile Defense System intercepting a rocket fired from Gaza.In the video, captured by a security camera in central Israel, the remains of the deactivated Gazan rocket can be seen violently falling on the tree. Moments later, Schnitzel the Cat hops down from the same tree and runs home, presumably to the joy of his owners.

In light of Gazan rocket fire over the country's South, the Society for the Prevention of Cruelty to Animals in Israel invited southern residents to bring their pets for free to the organization's shelter in Tel Aviv.

Aiming to prevent pain and suffering to the animals, as well as help southern residents cope with what has become a difficult situation, SPCA Israel stressed that residents who cannot properly care for their pets should bring them to 159 Herzl Street in Tel Aviv. The organization called upon southern residents to refrain from abandoning their animals in the streets.