1967 and the myth of Palestinian victimization

The days of David vs. Goliath and the image of Israel as a country threatened with imminent destruction are long gone. 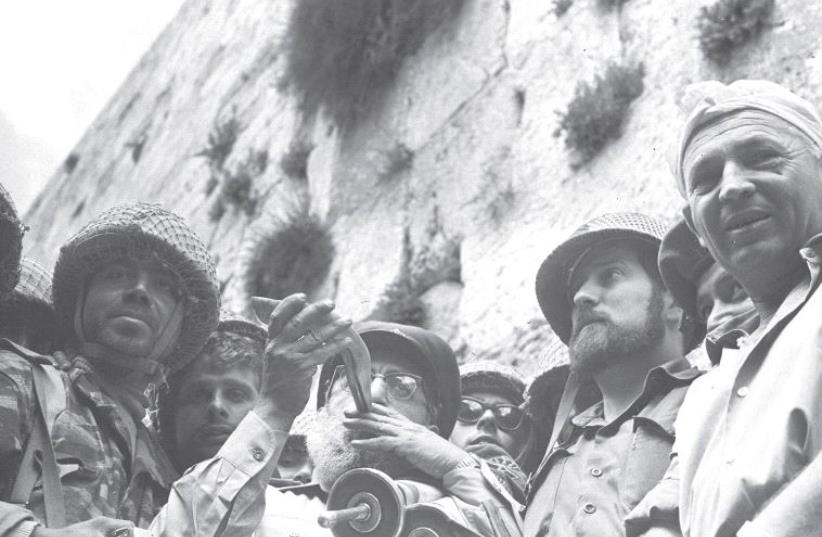 IDF CHIEF RABBI Shlomo Goren blows a shofar while he clutches a Torah scroll at the Western Wall on the day Jerusalem was reunified in June 1967
(photo credit: GPO)
Advertisement
In the weeks of tension before the Six Day War, Israel’s struggle for survival was seen around the world as a contest between good and evil. The threats to “push the Jews into the sea,” were widely reported, as were the military preparations and sudden departure of UN peacekeepers. Israel was still the plucky David of 1948, ominously threatened by the Arab Goliath. Although the PLO – the Palestine Liberation Organization – was created in 1964, the Palestinians received little attention. In this environment, Israel’s success was widely applauded, particularly in the West.But gradually, the images began to change as the Arabs used their oil power and threats of terrorism to gain allies and market anti-Israel campaigns in Europe. In France, the elite’s support for Israel waned before 1967, based on a cold calculation of economic interests, and in Britain, a mix of Arabist romanticism and antisemitism gained influence.In North America, avant garde intellectuals switched support to the newly minted Palestinian cause.Under Yasser Arafat, PLO airplane hijackings and mass terrorism such as the 1972 Munich Olympic massacre put the “plight of the Palestinians” high on the priority list, and the Arab oil embargo that accompanied the 1973 Yom Kippur War reinforced this process. Support for Israel became a liability, but rather than admitting that this was due to weakness and fear, political officials and diplomats blamed the post-1967 “occupation.”Israel suddenly became the dominant power, and was automatically pronounced guilty (without much of a trial) for the failure to end the conflict. In 1980, Europe officially promoted Palestinian independence as a magic solution to the conflict, and condemned “Israeli settlements” as the “primary obstacle to the peace process,” while terrorism and incitement were hidden under the diplomatic, journalistic and academic carpets.This language and the policies behind it have not changed in 37 years.But for Palestinian leaders, settlements and the absence of a Palestinian state next to Israel were not the main issues; Arafat told anyone who would listen that “the goal of our struggle is the end of Israel, and there can be no compromise or mediations. We don’t want peace, we want victory. Peace for us means Israel’s destruction and nothing else.” (Cited in The Washington Post, March 29, 1970.) In the United Nations, which was still taken seriously at that time, the Arabs were joined by the Soviet Union, which combined Cold War competition with crude antisemitism.Bodies such as the UN Commission on Human Rights (now a council) were turned into platforms for Israel-bashing – in part for its own sake, and also to turn attention away from the dictatorships. As one official noted, it was much easier to “support a condemnation of Israel for reprisals against Arab sabotage” than to deal with real abuses.UNRWA, created in 1948 ostensibly to help war refugees, remains a permanent source of propaganda and hate, and in 1975, the UN General Assembly adopted the infamous “Zionism is racism” resolution. The Division for Palestinian Rights was created and funded to orchestrate a traveling road show known as the Committee for the Exercise of the Inalienable Rights of the Palestinian People, to promote the mythology in Jakarta, Beijing, Brussels and elsewhere.Into this propaganda mix powerful human rights organizations, such as Amnesty International and Human Rights Watch, began promoting the myths of Palestinian victimization and Israeli “violations of international law.” Mass producing condemnations of Israeli “occupation” while erasing the images of Palestinian terrorism and its victims, they rewrote the history of the conflict as well as the reality on the ground. A generation of journalists, political officials, and other “elite opinion makers” were indoctrinated into accepting this narrative without question. In this environment, the transition to boycott campaigns and other forms of demonization was simple.Among Israelis, the gap between our understanding of history and the way it was portrayed elsewhere was largely ignored, allowing the damage to fester and grow. When politicians finally recognized the implications of the “narrative war,” many of the responses, including the recent legislation to ban leading foreign boycott activists, were heavy-handed and counterproductive.As the 50-year anniversary of the 1967 war approaches, the myths of Palestinian victimization and Israeli guilt will resonate widely in the UN, college campuses and media platforms.The challenge is to expose these slogans, and restore at least some connection to reality. But whether this will actually happen depends on how we package our messaging.The days of David vs. Goliath and the image of Israel as a country threatened with imminent destruction are long gone.The author is a professor of political science at Bar Ilan University and president of NGO Monitor.