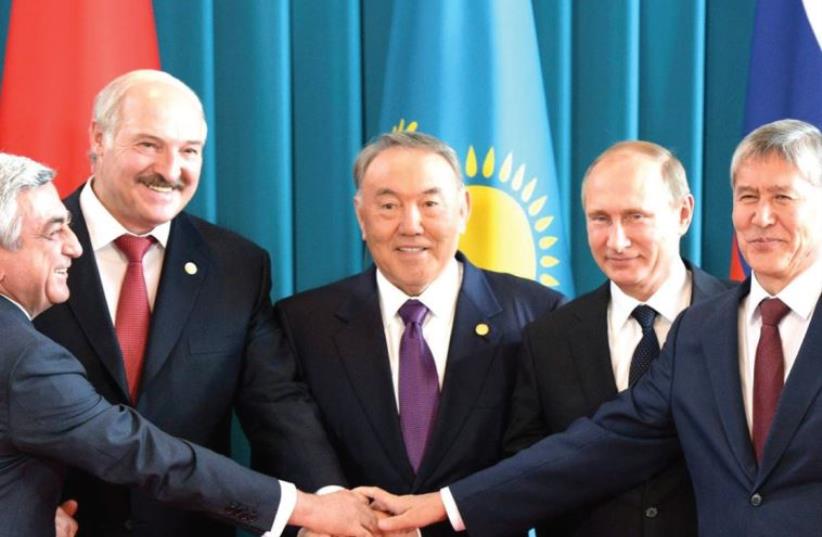 MEETING OF (from left to right) President Serzh Sargsyan of Armenia, President Alexander Lukashenko of Belarus, President Nursultan Nazarbayev of Kazakhstan, President Vladimir Putin of Russia and President Almazbek Atambayev of Kyrgyz Republic.
(photo credit: Courtesy)
Advertisement
Against the background of a vivid ongoing political and security dialogue between Israel and Russia regarding dramatic transformations in the region and beyond, there is another important point on the bilateral agenda, which potentially opens new horizons for the two nations as they celebrate this year the 25th anniversary of the restoration of diplomatic ties.The upcoming high-level talks between Israel and Russia will provide an opportunity to move forward, among other things, the idea of forging a partnership between Israel and the Eurasian Economic Union (the EAEU), a trade bloc that has been one of the major achievements of Russian diplomacy in recent years.In 2015, Russia, together with other Israel-friendly countries – Armenia, Belarus, Kazakhstan and Kyrgyzstan, formed this fully integrated common market and customs union of over 182 million consumers, cheap skilled labor, vast natural resources and transparent rules for investment. Since 1991, the EAEU has become the most successful economic integration project in Eurasia, which uses the best experience of its member states, as well as the EU and the WTO practices.The Eurasian Economic Commission was established as a supranational body which makes decisions obligatory for all member states (www.eurasiancomission.org). The other key bodies of the EAEU are the Supreme Economic Council and the Intergovernmental Council.Five states combined their efforts to unify economic policies on the common territory and gradually moved toward eliminating both tariff and non-tariff barriers. Now, the EAEU provides for free movement of goods, services, labor and capital, and pursues a coordinated, harmonized and single policy in the sectors determined by the member states.All these efforts resulted in increasing the sustainability of the five economies under current global conditions, as well as in upgrading the competitiveness of goods and services. Therefore, it is expected that it will gradually lead to qualitative improvements, including enhanced living standards of the peoples of the member states.The EAEU potential is significant. It would hold a sixth place between Japan and Germany in the chart of the wealthiest economies. The GDP of the union amounts to $4.1 trillion: Russia makes a valuable contribution of $3.5 trillion; the GDP of Kazakhstan is $395 billion, that of Belarus is $167b., Armenia $23b.and Kyrgyzstan $18b. It embraces an area of 20.2 million sq.km., exceeding the EU area five-fold and the territories of China or the US by half. The EAEU economy occupies a leading position in oil and gas production, second in the manufacture of mineral fertilizers, third in producing electricity and fourth in the production of coal, steel and wheat.It is accurate to say that the EAEU is not a closed-door trade and economic association. On the contrary, it is inclusive and open for mutually beneficial cooperation.Many countries and international organizations are interested in benefiting from this new integrated economic bloc. Last May the EAEU and Vietnam signed a free trade agreement. Among 40 countries and organizations which have also expressed their wish to sign a FTA with the EAEU are such important partners of Israel as Egypt, India and China.The Chinese “Silk Road Economic Belt” initiative is one of the new items on the EAEU agenda of cooperation with other integration projects. This venture dramatically shortens the distance of goods transportation from Asia to Europe compared to the route through the Suez Canal. The length of the new route is 8,400 km.: 3,400 km. are in the territory of China, 2,800 km. and 2,200 km. are in Kazakhstan and Russia respectively.The main advantage of this transportation corridor is only one customs border, between China and Kazakhstan.As for Israel, in October 2015, the leaders of the EAEU member states decided to launch talks with the Israeli government.We hope that by the end of 2016 a draft free trade agreement with Israel will be agreed upon.Experts believe that this will bring a six percent to 8% increase in trade turnover to Israel and boost investment and technological cooperation. Thus, we shall be able to improve each other’s capabilities for economic growth and better address common challenges together.The author is Russia’s ambassador to Israel.