Israel needs to think twice before retreating into a shell of silence and allowing media outlets hostile to the Jewish state to present their slanted version of events. 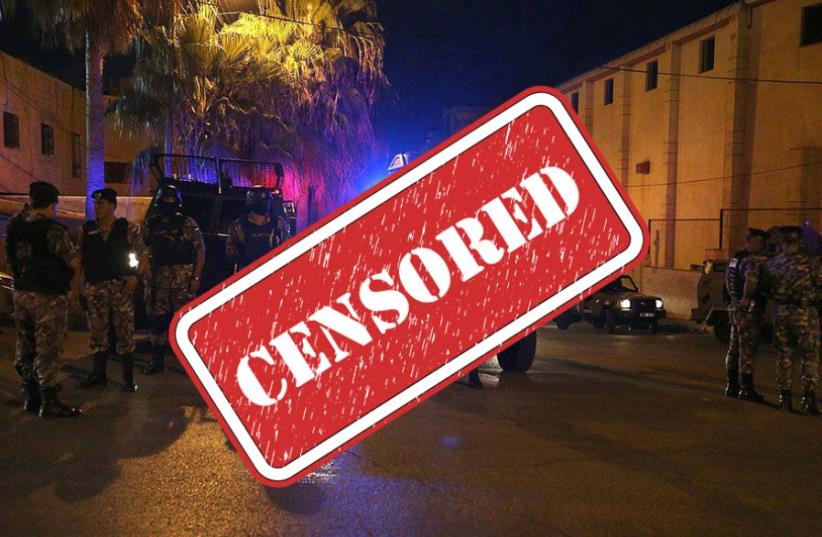 Jordanian police outside Israeli embassy in Amman
(photo credit: SOCIAL MEDIA)
Advertisement
In the Internet age with its abundance of social media and alternative media sources, preventing the free movement of information is almost impossible.This simple reality was on display Sunday night as reports began to proliferate about a deadly clash between a security officer employed by the Israeli Embassy in Amman and two Jordanians.According to news media sources that included Fox News, CNN, Reuters and The Independent, two Jordanians were shot dead in the confrontation. Initial reports were sketchy. It was unclear who was the attacker and who was the victim. Jordanian news outlets, which began reporting the incident around 7 p.m. Sunday, claimed that an Israeli security official had killed the two Jordanians in cold blood.Attempts were made by a number of outlets to receive a response from Israel. But Israel’s military censor had imposed a news blackout on the report. The blackout was strictly guarded. Reporters who attempted to even hint that something had happened in Amman were contacted by the military censor and asked to remove their posts from Twitter or other social media platforms.Meanwhile, Al Jazeera and other Arab-language news outlets continued to provide a highly slanted version of what had happened at the Israeli Embassy compound in Amman.An absurd situation was created in which it was possible to receive minute-by-minute updates on the situation in Amman from a plethora of media sources from the US, Britain, Jordan or Qatar. But no one in Israel who deferred to Israeli authorities could even hint at what was happening.Many have argued that the military censor, which derives its authority from laws passed by the British Mandate before the establishment of the State of Israel, is an anachronistic body that not only undermines the principle of free speech but also hinders Israel in its battle for hearts and minds.We understand the censor’s rationale in banning the publication of the news in Israel. There was a legitimate fear that had the Israeli press started its onslaught, the Jordanians would have toughened their stance and prevented the Israeli guard from leaving Amman. While this is anyhow what happened, the censor could not have known this late Sunday night, and made a judgment call, asking the Israeli press to wait a few hours, in the hope that Israel would be able to get its men out of Amman.Also, by imposing a complete blackout, it is possible to prevent incendiary comments by Israelis on social media or by hotheaded Israeli politicians, comments that are liable to trigger more violence in Jordan.But do these considerations outweigh the need to present a factual account of what happened in Amman as quickly and loudly as possible? By imposing a blackout, the military censor was essentially abandoning the virtual field of battle for hearts and minds that is carried out on the Internet, on Facebook and on Twitter. Israel has enough Arab-speaking officials who can appear on news outlets like Al Jazeera and present the facts and get Israel’s message across.In the crucial first hours after news of the shootings first surfaced, Israeli spokesmen should have been clarifying that the Israeli security officer had been attacked by a Jordanian carpenter of Palestinian descent armed with a screwdriver and that he had acted in self-defense.The second Jordanian was shot accidentally during the scuffle. Arguably, providing the correct context for the incident and explaining that the two Jordanians had not in reality been shot in cold blood might have done even more to protect the Israeli Embassy workers now stuck in Amman.We understood the censor’s considerations and abided by them; nothing appeared in the paper or online until the ban was lifted. But at a time when the entire world is reporting about an incident that has the potential to spark a major diplomatic and security meltdown, Israel needs to think twice before retreating into a shell of silence and allowing media outlets hostile to the Jewish state to present their slanted version of events.