“We are so used to Jews being killed because they are Jewish,” wrote Charlie Hebdo editor-in-chief Gerard Biard. 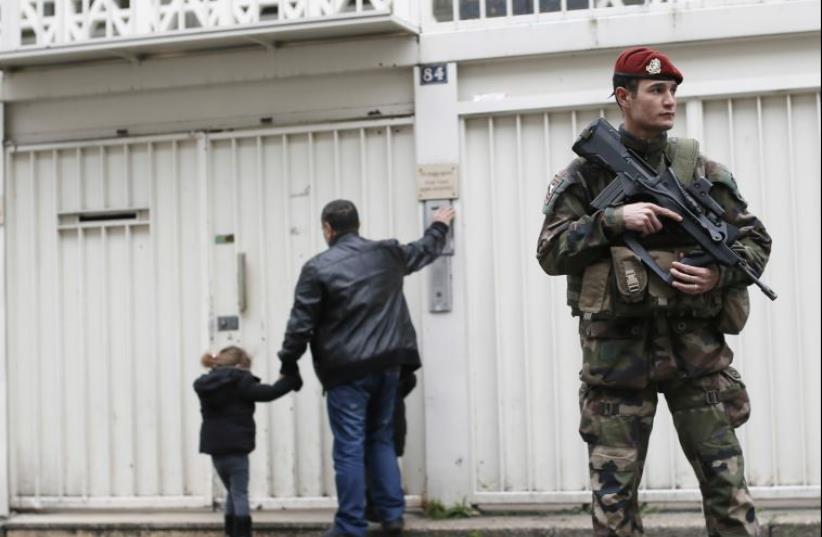 A French soldier secures the entrance to a Jewish school in Paris after the Charlie Hebdo and Hyper Cacher terrorist attacks last January
(photo credit: REUTERS)
Advertisement
This week France will mark the first anniversary of a double terrorist attack that targeted the offices of the Charlie Hebdo satirical magazine and the Hyper Cacher, a kosher grocery store.Yet, while the two attacks took place within just two days and while the fanatics who carried out the respective massacres shared the same nihilistic Islamist ideology, responses in France and around the world to the two attacks have been strikingly different.The assassination of editors, writers and artists of the satirical magazine awakened French pride in their robust freedom of speech – which includes the right to lampoon the sacred. However, precious little attention was paid to the dangers of Jew hatred fueling the wholesale murder of random shoppers whose only crime was being identified with Judaism.In a special edition of the magazine marking the anniversary, editor-in-chief Gerard Biard made this point, noting that the murder of Jews simply because they are Jews has not been given the public attention it deserves.“We are so used to Jews being killed because they are Jewish,” Biard wrote, according to an AP report. “This is an error, and not just on a human level. Because it’s the executioner who decides who is Jewish.” Biard went on to say that the Paris terrorist attack of nearly two months ago on November 13 that left 130 dead was proof that “the executioner…had decided we were all Jewish.”History has shown that, in times of crisis, Jews are often the first victims of discrimination or censure – or in extreme situations murderous violence. They are the canary in the coal mine that is uniquely susceptible to societal changes for the worse. But Jews are rarely the only victims.As a friend of Holocaust survivor and historian Victor Klemperer put it to him at a very dark time, the Jews have been both condemned and privileged to be “seismic people” – hyper sensitive to the vicissitudes of the human condition. This is the Jewish people’s lot, it can be no other way.Numerous, often contradictory, justifications have been given over the ages. Religious Jews are hated for rejecting Christianity or adopting practices like kosher slaughter and circumcision. Secular Jews are accused, meanwhile, of being godless communists or purveyors of dangerous ideas.When Jews lacked a homeland they were ridiculed for their rootless cosmopolitanism. Now that they have a land of their own, Jews are said to be fascists and occupiers and warmongers.Whatever the stated reason, the existence of strong anti-Semitic sentiments in a particular country reveals more about that country than it does about the Jews against whom anti-Semitic violence is directed. Inevitably, this anti-Semitism metastasizes to other forms of violence, as has been the case in France.France and other countries throughout Europe are facing major challenges. The Euro crisis has sparked another bout of skepticism about the entire European Union project, which has led to the rise of right-wing parties in a number of northern European countries, including France. Further buoying this right-wing surge are the waves of refugees from Syria, Libya and other Muslim countries pouring into Europe who are seen by many Europeans as a threat to their socioeconomic stability and culture.While it is true that the vast majority of anti-Semitic attacks are associated with Europe’s Muslim population, it is difficult to imagine far-right political parties, some of which with neo-Nazi or fascist roots, seriously and aggressively combating Muslim Jew-hatred.Unfortunately, as The Jerusalem Post’s Jewish world correspondent Sam Sokol pointed out in an analysis this week, European nations currently lack systematic methods of collecting data on anti-Semitism. The European Union Agency for Fundamental Rights (FRA) noted in 2013 that this state of affairs was contributing to “gross underreporting of the nature and characteristics of anti-Semitic incidents that occur.”Europeans have a moral obligation to take violent anti-Semitism seriously. An important first step should be to develop systematic methods for measuring the phenomenon.There is no better time for this than now, as millions commemorate the one-year anniversary of the Charlie Hebdo and Hyper Cacher attacks.