Why is there no peace now? Israelis are not attacking Arabs. 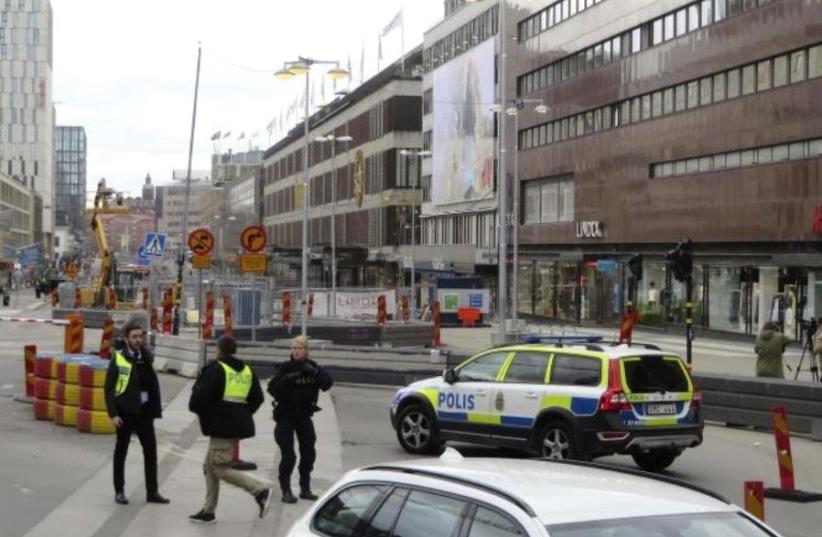 4 killed in suspected terror attack in Stockholm, Sweden - April 7, 2017
(photo credit: REUTERS)
Advertisement
Peri’s realityI am writing to discuss Yonah Jeremy Bob’s report on MK and former Shin Bet head Yaakov Peri’s views of a Palestinian-Israeli peace (“‘Israel and PA both need to be pressured to move forward with peace,’” Frontlines, April 7).Aside from believing that Israel and the Palestinian Authority both need to be pressured, Peri, according to the article, furthermore thinks that bilateral negotiations will not be productive, although multinational negotiations with Egypt, Jordan, Saudi Arabia, most of the Gulf states, the US, Russia and elements of the EU will.Why is there no peace now? Israelis are not attacking Arabs.Arabs are attacking Israelis.They have been doing this for a hundred years. Why have Muslims attacked citizens of almost every western nation? Why have the Arabs refused every offer that would give them a state in part of Palestine? Arabs have never fought a war with Israel for land – only with the aim of exterminating Israel.They raise their children to hate Jews and Israel. When a Jordanian soldier was released from prison, where he was because he had killed seven Israeli girls, he came home to a hero’s welcome.There is no peace now because the Arabs are attacking Jews, which is what their imams, media and politicians prompt them to do. This culture of hatred is the reason there is no peace. This is something only the Arabs can eliminate.Let us assume that Peri is right and that we sign a peace treaty.Will there be no more knife attacks and car rammings? I doubt it. We will have the same attacks on Israelis, the same no-go zones for Israelis, and the same hatred for Israelis. We will have a meaningless piece of paper and a menacing political entity on our borders.Peri has created a scenario in his mind that has little relation to reality.PHILIP BRIEFF
JerusalemDefining the threat Lior Akerman (“Israel must remain alert,” Observations, April 7) dismisses former Mossad chief Tamir Pardo’s assertion that the two-state solution poses an existential threat to Israel, and identifies other threats that, in Akerman’s estimation, are similarly non-existential.Akerman’s analysis is faulty.First, he seems to assess threats individually rather than cumulatively.A Palestinian state by itself might not threaten Israel’s existence. However, should the state become a launching site for rockets and terrorist attacks (as happened with the Gaza Strip), it could well pose an existential threat if the other actors he mentions (Hamas, Iran and Hezbollah) choose to work in concert.More importantly, it is irresponsible to minimize a threat simply because it may not result in Israel’s immediate destruction.All the threats Akerman identifies have the potential to severely degrade the personal safety and quality of life of Israelis. This could have a longterm impact on the country’s economy and aliya, and lead some residents to leave. The adverse ramifications of attacks by any (or several) of these actors might not be fully apparent for many years.Akerman fails to point out Israel’s fundamental error in responding to attacks. He says: “Hamas knows that Israel only responds to provocation with ‘proportionate’ responses....”This conveys a misunderstanding of the law of proportionality.Strategic proportionality does not require you to wait to suffer harm; nor are you obliged to inflict only the level of damage that you have suffered. (If that were the case, the aggressor would always control the conflict by inflicting only the level of damage it is willing to absorb in response.) Rather, actions must be proportional in relation to legitimate military objectives even if some civilian collateral damage is foreseeable.Unfortunately, Israel’s leaders have forgotten the essential strategy of a defensive war – to inflict heavy military losses on the other side as quickly as possible so that the enemy will be dissuaded from further aggression well before it becomes a serious (let alone existential) threat.ARYEH SHAPUNOW
Skokie, Illinois

A rip-offI would like to express my disgust at what I read in “Business, health leaders argue that food labeling could mean higher prices” (April 6).That the Israel Chambers of Commerce threatens to raise prices if health warnings are made more stringent seems nothing more than an effort to rip off the public.SYDNEY WOLMAN
Rehovot Preaching moralsWith regard to the letter from reader David Smith (“Straying grape,” April 6) and the response by Grapevine writer Greer Fay Cashman that immediately follows, may I briefly state that war is never moral, and all of us make the mistake of trying to be the most moral army in the world.We have been at war since before the State of Israel was born, not due to any fault of ours. Our enemies have imposed this situation on us.The walls, the army, the border posts, the raids and arrests in Judea and Samaria, but also our inventiveness have in many cases occurred due to the continuous problems created not by us, but by the incessant actions of our so-called peaceful neighbors, who know and are taught only enmity and the destruction of our tiny state.Are they the moral arbiters? Their destructive inventiveness has moved on from us to other nations. So go preach morals!S. GELGOR
Tel AvivSilence = assent Why did a terrorist drive a truck into a crowd in Sweden (“4 killed in Sweden ramming,” International News, April 9)? Why did a terrorist in a truck mow down people on holiday in Nice, France? Why did a terrorist run over people on Westminster Bridge in London? If the news media had reported and unequivocally condemned vehicular manslaughter as a terror weapon when it was originally used against Israelis, the technique would not be in use throughout the world now.Silence is assent.JULIA LUTCH
Davis, California
Advertisement
Subscribe for our daily newsletter