Israelis should all be alert but carry on their normal lives and let the police and security forces do their jobs to break the wave of terror.

By JPOST EDITORIAL
Israeli soldiers and rescue personnel at the scene of a stabbing attack by the Neve Daniel junction, near Jerusalem on March 31, 2022.
(photo credit: YONATAN SINDEL/FLASH90)
Advertisement

Israelis refer to any period of increased security tension as “Hamatzav,” The Situation, but last week, after three terror attacks took 11 lives within eight days, the defensive measures to halt the wave of terrorism was given its own name: Operation Break the Wave.

It is significant that the government and security forces have given it a name. First of all, it is an acknowledgment of the problem; secondly, it is a declaration of intent to take it seriously; and thirdly, and perhaps most critically, it is an indication of a new type of military operation.

Perhaps due in part to the prevalence of social media in which every attack is not only covered virally in real time but fake news of incidents abound, the public is on edge. The term “Third Intifada” has been bandied about by concerned citizens and commentators in the media. The loss of each of the lives of the victims of terrorism is a tragedy. But the current situation, thankfully, is not similar to the period of the Second Intifada.

Keep in mind that in March 2002 – the bloodiest month of that intifada – more than 135 people were murdered in terror attacks. In those days, taking the bus, going to the shopping mall, eating in a restaurant or attending a family celebration in an events hall – all these seemed to be akin to playing Russian roulette.

The wave of terror that month culminated in the Park Hotel Massacre on Seder Night in Netanya when terrorists murdered 30 people as they celebrated the start of the Passover holiday. That abominable attack led directly to the decision to launch Operation Defensive Shield in which IDF troops and security forces regained control of Palestinian hotbeds of terrorism such as Jenin. It was also the reason the security fence was constructed. 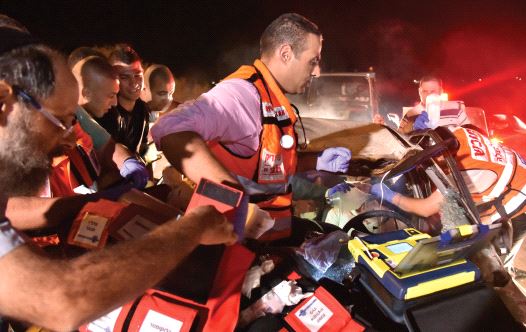 Muawia Kabha, the initial first responder to enter the dining room after the blast at the Park Hotel (credit: UNITED HATZALAH‏)

Israel’s detractors love to call the security fence “The Apartheid Wall,” ignoring the Palestinian terrorism that made it necessary and that it helped reduce attacks.

Twenty years on, Israel cannot launch a similar operation to physically control Jenin and other Palestinian towns and villages in Judea and Samaria, but Operation Break the Wave shows that there are other ways to restore security to Israel.

That Israeli security forces this weekend stopped three Palestinian Islamic Jihad terrorists in the Jenin area labeled “ticking time bombs,” as they were armed and on their way to carry out a large-scale attack, is a sign that with good intelligence and swift, courageous action, the operation is working.

One of the first things that should be done is to repair the gaps in the fence which has been allowed to fall into disrepair. Palestinians with the relevant permits can enter Israel to work and pray, particularly during Ramadan, those who do not have proper security clearance need to be kept out.

Another essential factor for Operation Break the Wave to succeed is to bring international pressure on the Palestinian Authority to end the incitement to terrorism and halt its “Pay-for-slay” policy rewarding terrorists and their families.

Given that two of the three lethal attacks in March were carried out by Arab Israeli citizens, efforts need to focus on this community too. This is especially important following the Arab riots and murder of three Jews last May as Hamas rockets rained down on the country.

There is a widespread understanding that the wave of violence within the Arab community has spilled over into terrorism. When illegal arms and lawlessness are not contained. it is inevitable that it will lead to an escalation.

Here, too, the focus needs to be on intelligence, police action, getting the local population on board through volunteer police programs, and education. It would also be pertinent to “follow the money,” to see who is funding the vast quantities of illegal arms and take action at the source, keeping an eye on Iran which funds Hamas, Hezbollah and other terrorist organizations.

The situation calls for vigilance, not vigilantes. Israelis should all be alert but carry on their normal lives and let the police and security forces do their jobs to break the wave of terror.