God is in Israel's Declaration of Independence - opinion

It is clear from the Tanach that “Rock of Israel” is an expression of our steadfast faith in God as our rock, our strength and our protector.

Since the miraculous birth of the State of Israel, the nascent Jewish nation has struggled with its identity: Would the Jewish state be a “Jewish” state, or a state “for the Jews”? A religious state, or just another Western democracy?

One vivid example of this identity crisis was a debate that took place over the very text of the Declaration of Independence.

In late April 1948, Pinchas Rosen, then head of the pre-state judicial council and later the first justice minister, assigned the task of drafting a declaration to an attorney by the name of Mordechai Boehm. Boehm, in turn, enlisted the help of an American rabbi living in Israel, Shalom Zvi (Harry) Davidowicz. In this first draft of the Declaration of Independence, Davidowicz based his text on the US Declaration of Independence, and included a number of references to God.

This was met with much opposition by secular party leaders, and changes and additions were made by Zvi Berenson, the Histadrut labor federation’s legal adviser, and later a Supreme Court justice.

Berenson’s version was also problematic for some, and so in the days and weeks preceding the British withdrawal from Mandatory Palestine, a new draft was prepared by politicians, lawyers and writers, including Shai Agnon. The final draft of the Declaration of Independence was drafted by a small committee including David Ben-Gurion, Moshe Sharett, Aharon Zisling and Rabbi Yehuda Leib Fishman-Maimon. 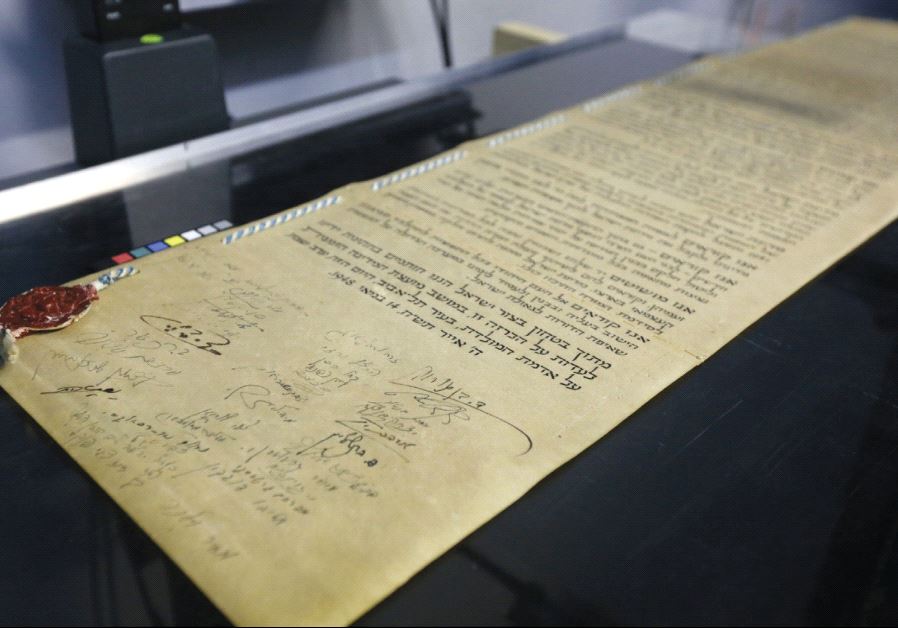 Maimon, head of the Mizrachi Party and later the first religions minister, along with other religious-Zionist leaders, believed strongly that the Declaration of Independence should indeed mention God. Facing pushback, Maimon recommended using the term “Tzur Yisrael v’Go’alo,” “the Rock of Israel and its Redeemer,” an expression based on passages found in the Tanach and in our liturgy.

But Zisling, leader of the left-wing Mapam Party, refused to sign the declaration if it contained any references to “a God in whom I do not believe.”

Other left-wing leaders felt any references to God or religion represented religious coercion, and were a threat to democracy. The disagreement grew to the point where it threatened to derail the proclamation of the establishment of the Jewish state. Ben-Gurion spent much of the morning of May 14 mediating between Maimon and Zisling. After hours of talks, they finally agreed on “Rock of Israel,” while omitting “and Redeemer” from the text.

The Declaration of Independence begins by affirming the Jewish people’s ancestral and spiritual connection to the land, but instead of the word “Torah,” uses “Book of Books”:

“The Land of Israel was the birthplace of the Jewish people. Here their spiritual, religious and political identity was shaped. Here they first attained to statehood, created cultural values of national and universal significance and gave to the world the eternal Book of Books.”

“Placing our trust in the Rock of Israel, we affix our signatures to this proclamation at this session of the provisional Council of State, on the soil of the Homeland, in the city of Tel Aviv, on this Sabbath eve, the 5th day of Iyar 5708, May 14, 1948.”

Ben-Gurion was comfortable using the term “Rock of Israel,” as he felt each individual may decide for himself just what “Rock of Israel” means to him.

But it is clear from the Tanach that “Rock of Israel” is an expression of our steadfast faith in God as our rock, our strength and our protector. In Hannah’s prayer, she recognizes “there is no rock like our God” (I Samuel 2:2). On his deathbed, King David says, “The Rock of Israel has spoken to me: ‘Become a ruler over men; a righteous one, who rules through the fear of God’” (II Samuel 23:3).

Other references to God as our Rock can be found in Isaiah and Ezekiel.

The Prayer for the Welfare of the State of Israel, penned by Chief Rabbi Yitzhak Isaac HaLevi Herzog, begins “Our Father in Heaven, Rock of Israel and Redeemer (Tzur Yisrael v’Go’alo).” Some speculate that this choice was no coincidence. Herzog’s intention was to invoke the Declaration of Independence and imbue it with religious meaning.

Just hours after its final wording was decided, party leaders lined up to sign their names to the declaration. Maimon added something small, just above his signature: The Hebrew letters bet, ayin, zayin and hey, representing “be’ezrat Hashem” – “with the help of God.” And following Ben-Gurion’s reading of the declaration, a visibly emotional Maimon stood up, trembling and choking back tears, and recited the blessing of Sheheheyanu, with God’s name, to which all assembled answered Amen.

In the end, God’s name would appear in the Declaration of Independence after all!

The writer lives and teaches in Jerusalem, where he serves as rabbi of Har Nof’s Kehilat Zichron Yosef.