Although there is very little likelihood of an embassy of any Arab country moving to Jerusalem, the ambassadors of those Arab countries that have diplomatic relations with Israel are frequently in the capital for any number of reasons, including meetings with prominent figures in the Arab community.

UAE Ambassador Mohammed Al Khaja, who tweets many of his messages in English, Hebrew and Arabic, did so again on June 13, following a Zoom conference related to the Abraham Accords. He thanked US Ambassador Tom Nides as well as colleagues from Bahrain, Morocco and Israel “for coming together to discuss upcoming initiatives to enhance people-to-people ties across Abraham Accord countries. We look forward to building partnerships and programs that support peace and co-existence.”

On the same day, Al Khaja paid an in-person visit to the Israel Museum where he was warmly welcomed by Isaac Molho, the long-time chairman of the Museum’s Board of Directors and the Museum’s relatively new Executive Director Prof. Denis Weil. Molho and Weil took the ambassador on “a fascinating tour” of the museum, with particular emphasis on the exhibition Drifting with Magritte: Castles in the Air, which takes its name from the painting Castle of the Pyrenees 1959, the painting commissioned by Harry Torczyner from the Belgian surrealist René Magritte. Behind the exhibition which remains on view till October 18, is the intriguing story of the artist’s evolution and how the painting that Torczyner donated to the museum, came into being. Art lovers who might care to know more may wish to attend the gallery talk by the exhibition’s curator Efrat Aharon on Wednesday, June 22 at 12 noon. People interested in the talk should meet at the Museum’s information desk.

■ IN ISRAEL, people know that summer has arrived regardless of the weather forecasts. All it takes is full-page advertisements in the Hebrew media with the announcement that American hassidic singer Avraham Fried will once again be performing at the Sultan’s Pool in Jerusalem – this time to mark the 40th anniversary of his singing career. Actually, it’s 41 years since 63-year-old Fried, whose real name is Friedman, released his first album No Jew will be Left Behind. A Chabad hassid and a kohen to boot, New York-born Fried was encouraged by the Lubavitcher Rebbe Menachem Mendel Schneerson to embark on a musical career. The Rebbe was well aware that there was more than one form of outreach. 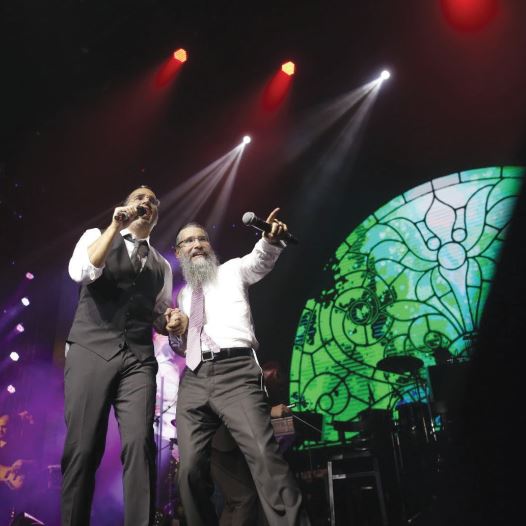 Fried’s first concert tour in Israel was in 2009 and he’s been coming back regularly ever since. He makes a point of having Israeli guest performers on his shows, and this time it will be singer, songwriter, musical arranger, composer and actor Nathan Goshen, who was born into a secular family in Lod, but who in his early teen years became religious.

Goshen who lives in Jerusalem will join Fried on stage at the Sultan’s Pool on Sunday, June 26.

■ IT’S UNFORTUNATE that many people who have made significant contributions to various spheres of life in Israel are insufficiently recognized in their lifetimes and receive their accolades after they die and can no longer bask in the glory. A case in point is songwriter Yoram Taharlev, who died last January. Taharlev was also a stand-up comedian, often basing his material on Biblical stories, on the premise that if the audience laughs a lot, it will have a better recollection of the message in the story. Buried inside the humor was an effective educational tool. But Taharlev is best known as a prolific songwriter, whose love for Israel is expressed in many different ways in the lyrics. Since his passing, he has been widely acknowledged as the soundtrack of the nation and there have been several tribute concerts in his memory.

Coming up on Friday, June 24 at 1 p.m. at the Tel Aviv Charles Bronfman Auditorium (Heichal Hatarbut) is a concert cosponsored by Keshet 12, Zappa and Bank Hapoalim Wonder with singers Ilanit, Assaf Amdursky, Jane Bordeaux, Danny Robas, the Givatron choir, the Parvarim, Yardena Arazi, Tzipi Shavit, Rami Kleinstein and Shlomi Shabat. Tickets are only NIS 50. Holders of Poalim Wonder credit cards will receive a 25-point gift, if they purchase their tickets with this credit card. The points will contribute to the number of points required for numerous perks and gifts.

■ AMERICAN CITIZENS have been complaining for some time that they are unable to renew their passports, while Israelis wishing to travel to the US have difficulty in getting visas. By the same token, Israelis who want to renew their passports have discovered that there’s a long waiting period. In the days before appointments when everyone just took a number, people sat around in the waiting rooms of the Interior Ministry, for nearly half a day before their number was called but then had to wait for less than a week for their passport to arrive in the mail. Now, it takes forever, or not at all. Case in point is that of Daniel Moskovich, who on realizing that the passports of his children had expired could not get an early appointment at the west Jerusalem offices of the Ministry, and was told that he would have to wait for several months. He thought that he might beat the system by going to the office in Kalandiya, where he had no problem getting an appointment. He even showed up early to make sure that he would be received on time and was shocked when told by a security guard that Jews were not admitted to this branch. Moskovich’s ex-wife and their two children arrived a few minutes later. She was asked by a different security guard whether she was Jewish, and when she replied in the affirmative, was told that there is no admittance to Jews. It’s the last thing that any Jew expects to hear in a government office in the Jewish homeland, even if it is near the checkpoint leading to Ramallah.

The matter is currently under investigation.

But the passport and ID bureaucracy problem does not exist only in the above-mentioned cases. The Australian Embassy on its website has under the heading “Important message for Australians wishing to apply for passports” offers advice to renew passports well ahead of planned travel dates because demand is so strong. In emphasizing this point, the message states that delivery takes approximately 10 weeks, and applicants are required to make an appointment.

Doubtless, similar difficulties exist in other embassies and the only consolation for Israelis seeking to renew their passports is that there is an emergency office of the Interior Ministry at Ben-Gurion Airport, where a passport can be renewed within five minutes. The cost is almost three times that of a regular passport and the emergency passport is valid for only a year.

Coupled with all that is the last-minute cancellation of flights and the difficulty of recovering deposits paid to travel agents, airline companies and hotels. It looks as if it’s going to be a very disappointing summer for a lot of people. On the other hand, it’s a chance to discover more about Israel. Many people are unfamiliar with areas in their city, let alone the whole country. Among the least expensive ways to explore the city is via bus rides using the monthly Rav Kav. Take a bus on a route that you’ve never traveled before. Stay on board for the whole journey, or get off wherever the fancy takes you and get on the next bus after you’ve walked around the areas at which you alighted. It will cost you absolutely nothing unless you get off at a shopping center and buy something. Otherwise, you can ride on different bus routes all day – absolutely free of charge.

■ WE ALL change as time passes. We lose height; we gain wrinkles. Our once slim figures begin to spread. Our hair goes gray, then white, or disappears entirely. Our sight and hearing are diminished, and we tend to walk at a slower pace. All these things are gradual and mostly bearable. The most difficult change is to live with a loved one in cognitive decline, whose memory keeps slipping until in some cases, they no longer recognize us. The old saying “when life deals you a lemon – make lemonade” applies to Barbara Diamond, who lives with a loved one who has had cognitive decline for some time. The experience – coupled with help that she received from the Melabev organization that cares for people with Alzheimer’s and dementia – inspired her to write a diary that chronicles one person’s journey with a loved one with failing cognitive abilities.

Written with pathos, humor and insight, the diary was shared online and helped many others in similar situations. It is now a book published as The Dementia Diary, which will be launched on Tuesday, June 21 at 7:30 p.m. at Melabev, 152 Bethlehem Road, Jerusalem.