How can we stop babies dying in hot cars? - opinion

Until automatic sensor systems are fitted as standard to every car, it is incumbent upon every single parent to make sure that this doesn’t happen to them

By ANDREA SAMUELS
POLICE AND ZAKA personnel attend the scene where a father left his small child in the car in Sdot Negev last summer. The boy died of what was termed ‘heat prostration.’
(photo credit: FLASH90)
Advertisement

Tragically, each year, dozens of babies and small children die in hot cars. “Death by hyperthermia” is the official term. Parents, often suffering extreme sleep deprivation and stress, are among those most at risk of forgetting their children in the car.

Many people firmly believe this could never happen to them, (me included, before I started researching this article), whereas others think that none of us is immune.

Prof. David Diamond has been studying Forgotten Baby Syndrome (FBS), the phenomenon of forgetting a child in a parked car, since 2004. He has also served as an expert witness in a number of cases of this nature. Diamond, professor of psychology, molecular pharmacology and physiology at the University of South Florida, said scientific studies of the brain prove that FBS does exist. Consequently, such an appalling tragedy could in fact happen to any one of us.

His theory as to how and why a situation can occur in which, in his words, “the parent completely loses awareness that the child is in the car,” is set out below.

It typically happens when an event outside of the normal routine occurs, such as dropping the baby off at daycare. Coupled with sleep deprivation or stress, the parent is in danger of lapsing into autopilot, which would result in driving straight to work (as they would do on any normal day) rather than dropping the baby at daycare on the way. 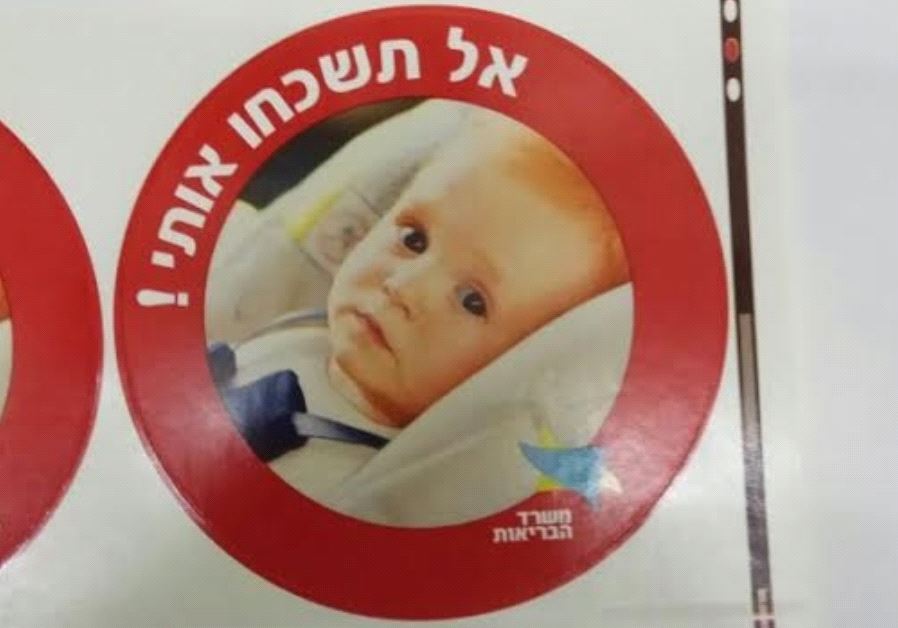 Two decades ago, this tragic scenario was rare. Since the early 1990s, however, when parents were told to move their babies to the back seat, (facing backwards in the case of very small babies), due to the dangers posed by front airbags, more and more children lose their lives in hot cars each year. Infants and toddlers are more rapidly and more severely affected by extreme temperatures than adults, due to the small dimensions of children’s bodies.

In a study performed for General Motors, it was found that a car parked in the sun at a temperature of 35°, could reach more than 50° after 20 minutes and more than 65.5° after 40 minutes. Leaving a window open doesn’t help either.

So what can be done to prevent this appalling tragedy from occurring?

The Justice Ministry has adopted a policy of not prosecuting other than in exceptional cases: “In general, the parent will not be charged except if the degree of negligence is high – such as leaving a child in a car with the intent of leaving him there for a short time and then forgetting him.”

But is this the right approach? In the US, around 60% of such cases involve a prosecution for involuntary manslaughter. This decision to prosecute usually falls to one person alone and is based largely on his or her belief as to whether the child’s protection is paramount and, accordingly, the parents should be held accountable for their actions.

In Israel, however, where such prosecutions are rare, many believe the death of their child is punishment enough for the parents. While I sympathize with this view, I do not believe that enough is being done to prevent such horrific deaths.

Taking into account the findings of Prof. Diamond, it seems unlikely that blanket prosecutions of such cases would have the desired effect. Instead, a concerted effort by the government to raise awareness of this horrific issue and how to prevent it should be adopted.

One way to do this is through birthing classes. Not only should they deal with how to feed your baby or how to tell if a rash is serious and so on, they should also warn parents about the dangers of leaving a child in a hot car and make them aware that this can happen to anyone, including the most vigilant among us.

Advice on how to prevent it from happening should also be widely available. The use of apps, such as Pango; asking kindergarten teachers to alert parents if their child doesn’t show up; setting a reminder on your phone whenever you go out with your child; changing your screen saver to a photo of your child’s face with the words “don’t forget me,” or simply leaving your bag on the back seat next to your child are just a few ideas that could help.

Until automatic sensor systems are fitted as standard to every car, it is incumbent upon every single parent to make sure that this doesn’t happen to them. In this day and age, with all of the technological advances and gadgets at our disposal, children should not be dying in hot cars.

The writer is a former lawyer from Manchester, England. She now lives in Netanya, where she spends most of her time writing and enjoying her new life in Israel.