Zionism has revived many Jewish ancient heroes and has brought forth many modern ones. 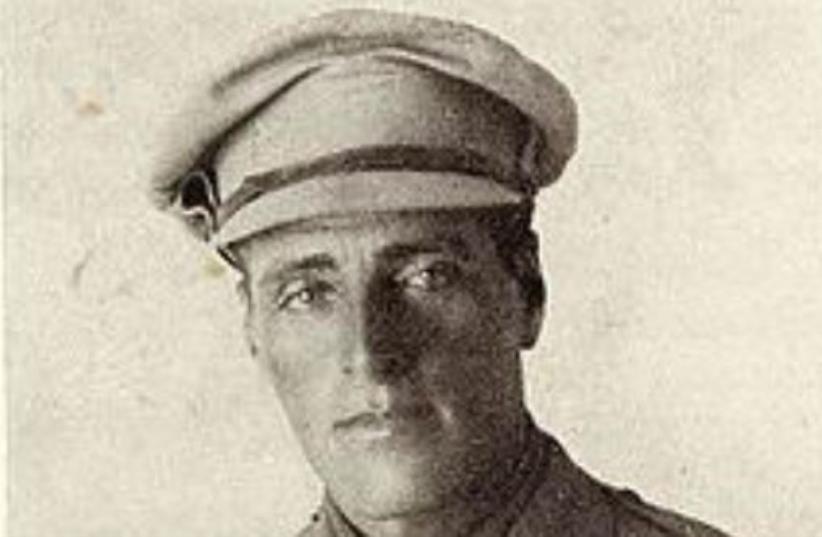 Yosef Trumpeldor is a tarnished hero of the Zionist movement. The heroic Trumpeldor is not at fault for the skepticism which has crept into his legend. There is plenty of blame to go around.

Zionism has revived many Jewish ancient heroes and has brought forth many modern ones. From the ancient revolts of the Maccabees and Bar-Kochba to the military exploits of Moshe Dayan and Ariel Sharon, the Zionist movement has always searched for legends to bolster a beleaguered movement and a state in siege.

Zionism did so to inspire the pioneer generation and toughen their children in the struggle for independence in a fight against all odds. The legend of Trumpeldor a century ago was necessary for its time and integral to the morale of the Yishuv and Jews in the early years of the State of Israel.

However, a new generation of Israeli intellectuals, professors, journalists, and historians have begun to question the pantheon of heroes that has been the source of great inspiration and pride. These are the “post-Zionists” who condemn Israel as colonialist and racist, built on myths that need to be crushed. Some Israeli intellectuals – post-Zionists such as Tom Segev come to mind – have converted Masada, once a legend of Jewish defiance in the face of overwhelming foes, into a self-defeating tale of mass suicide.

While I agree that mass suicide should not be a model for Jews today, 2000 years ago it was a heroic statement of freedom in the face of imperial oppression. The post-Zionists even degrade the great Hannah Senesh as a pawn of an impotent Jewish leadership in Yishuv during the Holocaust. Yet, the one icon that has suffered the most from attacks by polemicists against Zionism is Yosef Trumpeldor, the hero of Tel Hai.

JEWISH PIONEERS founded the settlement of Tel Hai – one of a number of Jewish settlements – in the Upper Galilee in 1918. Arabs assaulted the settlement in the Hula Valley after the French took control of the territory of Syria following World War I. On March 1, 1920, hundreds of armed Arabs faced a smaller group of Jewish pioneers in a protracted battle. The Jews decided to abandon Tel Hai. The Arab mob mortally wounded Yosef Trumpeldor.

Trumpeldor, born in Russia, epitomized the pioneering spirit and Jewish defiance in the face of the enemy. The Zionist movement recruited this highly decorated soldier – a veteran of the Russo-Japanese war and an organizer of the WWI Zion Mule Corps in the British army – to help organize the defense of the beleaguered Upper Galilee settlements, including Tel Hai. Eyewitnesses to Trumpeldor’s last moments of life said that his dying words were the now legendary, “Never mind, it is good to die for our country.”

Since he supposedly uttered those Hebrew words “tov lamut b’ad artzenu,” Trumpeldor became a Zionist icon. The Zionist movement commemorated the Ninth of Adar – the date of the attack on the settlement in the Hebrew calendar – as Tel Hai Day. Every year on that day, communities, soldiers, and schools throughout the Land of Israel held memorials for the pioneer hero.

They would visit the site of the settlement and the cemetery where Trumpeldor is buried. The statue of a roaring lion marks the grave sites of the fallen settlers. The legend of the patriotic Trumpeldor inspired the young State of Israel engaged in a struggle for existence with its Arab enemies.

The Russian Jew who lost his left arm to amputation after being wounded in the czar’s war against Japan in 1904 became a superhero in the eyes of both Ben-Gurion’s Socialists and Jabotinsky’s Revisionists. All Zionists – the Left and the Right – wanted to claim Trumpeldor as their own. His dying words became the credo of a modern nation.

Sir Martin Gilbert, in his 1998 history of Israel, describes the lionization of Trumpeldor in the Yishuv:

“The death of Trumpeldor was to have a substantial impact on the Zionist movement."

“The death of Trumpeldor was to have a substantial impact on the Zionist movement. He was only forty when he was killed. Songs, poems, and short stories were written about him. Children were named after him. His correspondence, diary, and personal memoirs, which were published two years after his death, became a basic text for Zionist youth. Both socialist and right-wing Zionists were to find inspiration in his life story. A youth movement, Brit Trumpeldor (Betar), founded in the Latvian city of Riga three years after Trumpeldor’s death, became the standard bearer of militaristic and nationalistic ideology.”

But the idealization – and idolization – of Trumpeldor’s actions and his last words would not endure. In her groundbreaking study of Zionist historiography and memory, Recovered Roots (1996), historian Yael Zerubavel traces how attitudes changed toward Trumpeldor as history unfolded in Israel. After the horrors of endless war, Israelis began to ask if, indeed, it was “good to die for our country.”

MANY SABRAS began to question if Trumpledor’s patriotic last words were ever said. Perhaps Trumpeldor, a Russian Jew whose Hebrew may have not been so fluent, merely cursed in Russian expletives as he died, some surmised.

Trumpeldor’s disability also became the subject of dark humor. Israelis joked about the statue of the lion on Trumpledor’s grave, arguing that it was hollow. In fact, they began to question the history and mythology surrounding the legend of the one-armed pioneer. Tel Hai, once central to Zionist ideology and ethos, became a tarnished myth, the subject of endless jokes.

Post-Zionists have smashed Trumpledor as yet another icon of Zionism. Many, if not all post-Zionists, discredited Tel Hai as a way to forfeit Israel’s legitimacy as a Jewish state. They believed it was merely an exercise in colonialism.

Yet, the time has come to revive Trumpledor as the hero of Tel Hai and a legend of Zionism, without resorting to the type of myth-making that should be reserved for kindergarten children. It matters little what Trumpeldor’s dying words were. It matters little whether he extolled Israel in the last minutes of his life or merely cursed his fate. Yosef Trumpledor was – and is – a genuine hero of all Jews and Zionists.

He was a war hero in the Russian army, a founder of the Jewish battalion known as the Zion Mule Corps during the World War One and a first-rate organizer of Zionist youth throughout the Pale of Settlement. His death at Tel Hai was, indeed, an act of heroism. If he expired cursing his fate in Russian expletives, it only highlights the humanity of a brave man who did not want to die. His role in the defense of Tel Hai inspired generations of Israelis who fought for the Jewish state.

Hamas, Hezbollah, and Iran still threaten Israel today and the heroism of Trumpeldor is still vital. Perhaps the jokes about Trumpeldor’s missing arm reflect a more mature evaluation of who the man actually was. We should not portray Trumpeldor as an Olympian god in the Zionist pantheon. He was a brave man; he was a human being. The Jewish people are in need of role models to emulate – not semi-divine humans to worship.

Zionism, after more than a century, remains a vital movement and ideology. The challenge Jews face in Israel and in the Diaspora is to mold a new Zionism that is mature enough to admit that the movement has made mistakes in the past – and in its interpretation of the ancient past and the 2000-year long exile – and move ahead with the lessons of history into the future.

There is no doubt that the Israeli establishment’s attitude toward and treatment of Holocaust survivors, Jewish immigrants from Arab lands, Arab Israelis and others deserves to come under criticism. But let us dispense with the libel that Zionism is built on myths and lies, both ancient and modern. Bar-Kochba at Betar and Trumpeldor at Tel Hai are valid heroes in the history of the Jewish people and Eretz Yisrael.

The attainment of Jewish sovereignty in Israel, the building of a Jewish army and a parliament, the project to create the type of “New Jew” who would both stand up for himself and revive the glory of the past – including that of the Diaspora – are all goals that should be praised. We do not need to look for icons to worship. We need human role models who will continue to inspire.

The writer is rabbi of Congregation Anshei Sholom in West Palm Beach, Florida.