Bar and the new Palestinian mayor of Jerusalem

Does Mr. Bar pretend that he has the winning formula for working together with a Palestinian counterpart on an interim agreement? 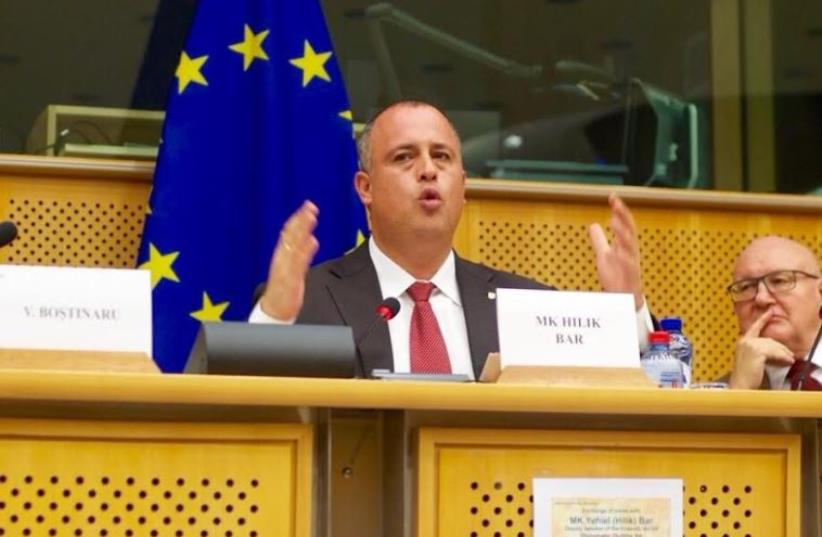 Zionist Union MK Hilik Bar at the European Parliament
(photo credit: Courtesy)
Advertisement
MK Hilik Bar (“The future of Arab east Jerusalem: Between Labor’s plan and Ramon’s plan,” The Jerusalem Post, April 24) twists history, denies facts and creates new “facts” in his effort to praise his “July 2015 diplomatic plan” and “the Labor Party’s diplomatic-security plan of February 2016” with regard to a final agreement on Jerusalem as a part of comprehensive agreement with the Palestinians. In order to do that he attacks the “Save Jewish Jerusalem Movement” that has proposed and published its Jerusalem Separation Plan (including in the Jerusalem Post). In addition to that he tries to smear the founding members of this movement – former IDF generals and senior police commanders, highest officials of the security services, former government ministers and key civil servants – by calling them “Ramon and company.”Speaking of the 2005 Gaza disengagement, Bar tells his readers that “the Likud government of Ariel Sharon chose to implement this step without a Palestinian counterpart.”Is that right, Mr. Bar? Your party, Labor, was a senior member of Sharon’s government. It was your Labor Party’s government as well. And one of this disengaging government’s ministers was your current Labor Party chairman, Isaac Herzog, who voted for Sharon’s plan. The entire Labor faction supported Sharon’s plan. And if I am not wrong, you yourself supported the supporters of this plan, not uttering a sound against them... More than that, Labor’s 2003 program was based on unilateral disengagement from Gaza.Does Mr. Bar pretend that he has the winning formula for working together with a Palestinian counterpart on an interim agreement? I believe that deep in his heart he knows that there is no chance for that. He knows that there was no chance to implement any kind of partial agreement in Gaza with a Palestinian counterpart. Or maybe Mr. Bar thinks that Israel should have stayed in Gaza till now and from now on? Speaking of “Greater Jerusalem” nowadays, Mr. Bar claims that it’s better for Israel to wait for a comprehensive agreement.He blames “Ramon and company” for not learning the lessons of the Gaza disengagement. The most severe libel Bar spreads is that the Movement for Saving Jewish Jerusalem proposes the creation of “a vacuum over which Hamas will assume control.” Gently speaking this is at least a false accusation. As the new movement has already published in the Post, “a continuous security fence will immediately be set up between the Arab villages and Jerusalem, separating the Palestinians villages from the Jewish neighborhoods. This security fence will completely be connected to the existing separation fence between Israel and the settlement blocs, and the rest of Judea and Samaria (the West Bank). The IDF and other security forces will enter and operate in the villages that have been separated from Jerusalem – just the way they are currently operating in villages and areas of the West Bank.”Is this a “vacuum over which Hamas will assume control”? Does giving Jebl Mukaber (currently a so-called part of Jerusalem) the same status as Abu Dis and other villages in the Oslo Accords’ Areas A and B mean handing them over to the Hamas? The opposite is true. Nowadays the IDF does not operate in Jebl Mukaber, because this village is a part of sovereign Jerusalem and not a part of the West Bank! All Israeli government and Jerusalem municipal agencies, officers and services, including policemen and inspectors, refrain from entering all those Palestinian villages that supposedly are part of the capital. Israeli sovereignty there is a fiction, a bad joke.Probably Mr. Bar prefers to keep living today, tomorrow and in the years to come in a “Greater Jerusalem” in which four residents out of 10 are Palestinians (going to 50:50...), in which seven out of 10 youngsters are Palestinians. So do the Palestinians.They have patience and time till one day, Mr. Bar, a Jerusalemite, wake up in the morning with a Palestinian mayor of Jerusalem.The writer is a founding member of The Movement for Saving Jewish Jerusalem.