Bringing a taste of Israel to Telemundo 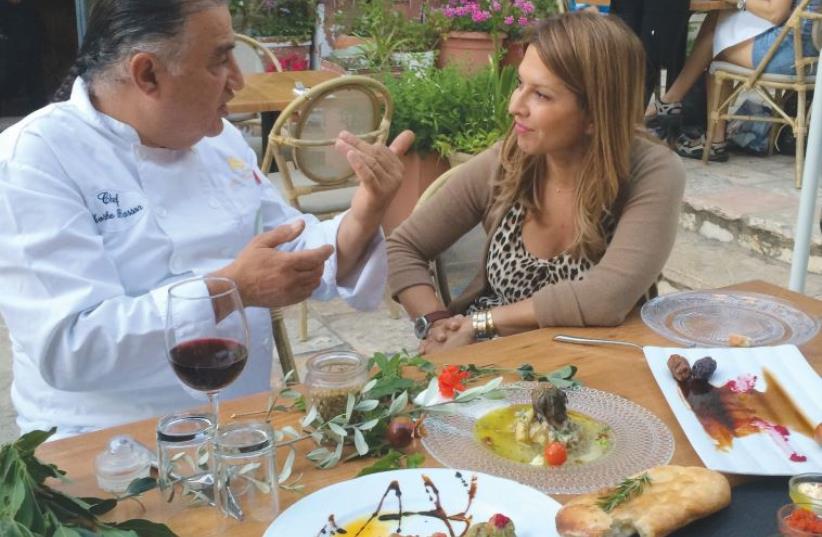 Moshe Basson and Ingrid Hoffmann eat a special meal at Eucalyptus restaurant in Jerusalem Sunday night.
(photo credit: Courtesy)
Advertisement
Nestled in her suitcase among her clothes and shoes, Ingrid Hoffmann has packed some bags of za’atar and sumac as she heads back to New York after her recent trip to Israel.Hoffmann, the 50-year-old star of the US Cooking Channel show Simply Delicioso and the Spanish-language Univisions’s Delicioso just wrapped up a weeklong tour of Israel, which included filming cooking and travel videos to air on TV in both languages.On her “first but hopefully not my last” trip to the country, Hoffmann ate her way around Israel, from the Dead Sea to the Galilee and everywhere in between. She was brought to the country by America’s Voices in Israel – which organizes trips for celebrities and media figures – in conjunction with the Prime Minister’s Office.“I had always wanted to come to Israel,” Hoffmann said over breakfast at the Inbal Hotel in Jerusalem on Monday, the last day of her trip. “My sisters and all my family have been here and they loved it so much that they came back... they always say that it’s one of the most memorable countries they have ever visited.”So when she was approached about the trip, she jumped at the chance to visit – and film – in the Holy Land.“Overall it’s been a very emotional trip,” she said.“Every site, every experience has been really very deep.There’s something you feel when you’re here – I don’t know if it’s so much prayer of so many religions happening at the same time.”She was also very moved by the historical elements of the visit.“It doesn’t matter what religion you are – you can appreciate such incredible history. It’s one of those places that you have to visit in the world.”Hoffmann filmed culinary-themed clips in Jerusalem’s Mahaneh Yehuda market, and also ate at its famed Machneyuda restaurant. She is planning on packaging the videos from her trip for a Telemundo morning show and similar English-language programs.“I think I could live in the shuk,” she said, bemoaning her lack of time to fully explore every alleyway. “It’s never going to be enough time. I could come back and spend a week by myself in the different markets.”On her last night in the country, Hoffmann also filmed a unique meal at Jerusalem’s Eucalyptus restaurant, with its chef, Moshe Basson.Eucalyptus is famed for its biblical-themed food, “An experience you cannot have in any other restaurant in the world,” said Hoffmann. “He bases the menu on the seven species and that makes for some really interesting dishes.” They enjoyed such delicacies as chopped liver macaroons, wheat with berries and artichokes and figs stuffed with chicken in tamarind sauce.Basson “is a very special person,” Hoffmann said, “and when the food preparation is made with that sort of meditation it tastes very special.”But now the Colombia native – who now calls Miami home – is eager to get back in the kitchen and experiment with some new-found flavors.“One of the things that inspires me always is travel,” she said. “There’s definitely some inspiration to sprinkle some Israeli flavors and ideas and create my own combination of Latino-Israeli cuisine.“I love eating very fresh ingredients – herbs and vegetables – and this cuisine is based on that, so for me it’s food paradise.”While the restaurant meals she enjoyed along the way were unique, Hoffmann has a special place in her heart for Israel’s street food.“I’ll be back in Miami or New York and I’ll say man, I really wish I could have that shwarma right now,” she predicted. “Or the burekas. Yes, you can find stuff like that at home, but it never tastes the same. There’s something about the water, the earth, the person making it, and the setting.”Along the way, Hoffmann and her team have been posting photos on Facebook, Twitter and Instagram – to mostly positive reactions.“We’ve been getting very positive comments on everything that is food and beautiful sites,” she said.“But when we posted photos with Israeli soldiers we got some really nasty hate.”“We never posted it meaning any insensitivity,” she said, “but it’s part of the territory. You can’t always make everybody happy and when you’re posting on social media that’s bound to happen.”But most of the comments online – in particular from her Hispanic audience – were favorable – even jealous.“Because Hispanics are so religious – Catholic Christians – I think every Hispanic’s dream is to come to Israel,” she said. “Their reactions are in awe – especially of the religious sites posted.”But whatever religious or political orientation her fans are, Hoffmann sees the culinary world as a perfect frame.“I like to always sell myself as a food ambassador,” she said. “I think that food is a great equalizer and food is something that crosses colors, religions and races. I think that it is a great way to back into acceptance and openness and tolerance.”