While staunchly proud Jews and Zionists, many in the communities, especially in the US, are unable to pay for an exorbitantly-priced Jewish education for their children. 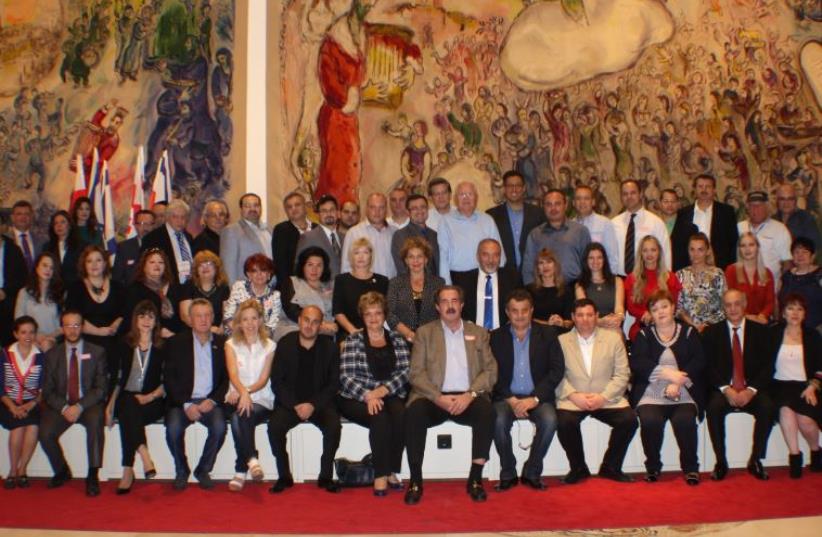 The delegation from Russian speaking Jewish communities worldwide to the World Zionist Congress 2015
(photo credit: SEYMON KATSIV)
Advertisement
A few days ago, in a meeting with the representative body of European Jewish communities, Russian President Vladimir Putin, acknowledging increasing anti-Semitism in parts of Europe, suggested that Jews fleeing persecution should come to Russia.With this remarkable statement, the Russian president intended to deliver what was, for him, an important message to the international community and to Jewish communities in Europe, Russia and worldwide.Putin’s first message was that, compared to Europe, the Kremlin has successfully controlled extreme Islamism in Russia and managed to provide security to the Jewish community, even though Muslims account for around one fifth of the Russian population, much higher than in the UK, France and Germany.The second message is that the level of anti-Semitism in Russia is lower than in parts of Europe, while the Kremlin is making great efforts to fight anti-Semitism in Russia and supports the Jewish community and Jewish life throughout the country.In fact, last year according to official statistics Russia was one of the only countries in Europe where the number of anti-Semitic incidents was actually in recession. President Putin widely supports the renaissance of Jewish life in Russia and strengthening the connection with Israel, economically and culturally.Much of this sentiment derives from his childhood experiences in Leningrad, including close relationships with his Jewish neighbors and friends, as well as with his beloved school teacher, Mina Yuditskaya Berliner, who now lives in Tel Aviv and whom he spent time with while visiting Israel.Also, Putin desires to maintain a connection with the over two million Jews who left Russia and the former Soviet Union for Israel, North America, Europe and Australia. He understands that their emigration was a huge loss for Russia, as Jews significantly contributed to Russia in many fields, including security, science, economy and culture.Putin is pretty unique in the history of Russia in his positive approach toward Jews.Under the rule of the Russian Empire before the October Revolution in 1917, Russian Tsars limited Jews’ basic rights and encouraged anti-Jewish pogroms, which by the end of 19th century caused the mass emigration of over two million Russian Jews to Northern and Latin Americas, Europe, South Africa and Australia. Only around 60,000 Jews made their way to Palestine at the time.During the Soviet Union, Jewish identity, culture and tradition and Zionist aspirations were suppressed and Jews were harassed.The collapse of the Soviet Union caused another mass Jewish emigration of around 2.5 million Jews, but this time half of them made aliya to Israel, making tremendous contributions to the development of the Jewish state in every field, especially in hi-tech, security, economy, medicine, culture, sports and education.Many other Jews from the FSU moved to the West; around a million went to the USA and Canada, 300,000 to Europe, mainly Germany, and 50,000 to Australia.However, even though they are largely unknown or misunderstood by many in the official Jewish organizational infrastructure, their assimilation rates are lower and attachment to Israel far greater than the average Jew in the Diaspora.Many understand, even those living in the Diaspora, that the only refuge and homeland for them, is a strong and secure State of Israel.Nevertheless, few in Israeli officialdom, other than the Yisrael Beytenu Party led by MK Avigdor Liberman, or leaders in the Diaspora, have cultivated these communities.They are left out of many of the major frameworks of Jewish living in the Diaspora, while they could and should become the backbone of the response to many of the global communal challenges facing the Jewish world.However, last year, for the first time ever, World Yisrael Beytenu coalesced these communities into a meaningful and representative voice within the World Zionist Organization.The Russian president understands well the importance of this community, and is seeking mechanisms to utilize them. However, few within world Jewry have understood the necessity of bringing Russian-speaking Jews fully within the Jewish communal tent.While staunchly proud Jews and Zionists, many in the communities, especially in the US, are unable to pay for an exorbitantly-priced Jewish education for their children, which is a demonstrably key requisite for Jewish continuity. In fact, it was after significant consultations with Russian-speaking communities around the world that then-foreign minister Liberman threw down the gauntlet for the State of Israel and world Jewry to create a high-level but affordable international network of Jewish and Zionist schools two years ago.This plan might be perhaps the only hope of reversing the 70 percent assimilation rates that are facing American and other Jewish communities.This international network of schools would produce proud Jews and Zionists, creating a strong cadre within the next generation who would have the tools to lead the response to some of our greatest challenges, including assimilation, the weakening of ties with Israel and increasingly rising anti-Semitism.This plan of action needs all Jewish communities to be united in dealing with these challenges and no recourse can possibly be successful without the coordination and cooperation of the Russian-speaking Jewish communities worldwide which currently make up almost a third of all Diaspora Jewry.The writer is CEO of World Yisrael Beytenu, member of the board of governors of the Jewish Agency for Israel, a member of the executive of the World Zionist Organization and former adviser to Israel’s prime minister.