The latest atrocity emerges from McGill University in Montreal. 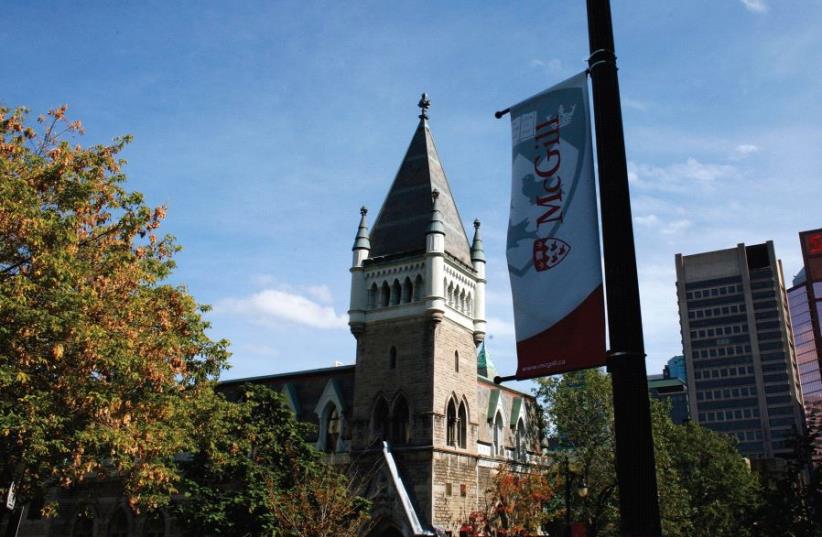 MCGILL UNIVERSITY campus in Montreal
(photo credit: REUTERS)
Advertisement
Hardly a day goes by without another headline revealing discrimination against Jewish college students in North America for expressing any kind of positive opinion about Israel.The latest atrocity emerges from McGill University in Montreal.Jordyn Wright, a member of both the Students’ Society of McGill University (SSMU) Legislative Council and the Society’s Board of Directors, was invited to participate this month in a Hillel-sponsored trip to Israel and the Palestinian territories called “Face-to-Face.” On Friday, the university’s legislative council passed a resolution calling on members of student leadership to decline “gifts that may create an appearance of a conflict of interests.” Posting on Facebook, Wright wrote that the council “voted to give me an ultimatum: either I withdraw from the trip, or I resign from my position. If I do not resign, I am being implicitly threatened with impeachment upon my return.”“I am outraged and disgusted, but not surprised,” she said. “This is not the first time that Jewish students at McGill have been bullied out of student government.”Wright explained that “year after year, we have witnessed student leaders at McGill University being targeted as a result of their Jewish and pro-Israel identities,” and that this year, “that student is me.”Wright’s plight dovetails into an even more absurd controversy that erupted last month at the University of Toronto, where a student union refused to support a campaign by the school’s Hillel to make kosher food available on campus, since doing so would be “pro-Israel.”The Graduate Student Union told a Jewish student representing Hillel in requesting support for its “Kosher Forward” campaign that supporting the kosher food campaign would go against the “will of the membership.” After the media storm it caused, the student union apologized for “unintentionally caus(ing) harm toward the Jewish community,” but the university’s Hillel responded that “this apology does not address the antisemitic nature of their original response. This is the core issue that must be discussed.”Those instances are just the tip of the iceberg, as a Google search last week using the keywords “antisemitism” and “campuses” revealed. Stories popped up with headlines like “Antisemitic video stirs concern on George Washington University campus,” “University of Florida dealing with accusations of racism and antisemitism” and “Syracuse students call for chancellor to quit over antisemitic incidents on campus.”At a gathering in Pittsburgh last week on the subject of antisemitism on campuses, attended by 300 Jewish student leaders from 90 universities across the US, those incidents and much more were the topic of discussion and of alarm.As The Jerusalem Post’s David Brinn reported on Friday, Pittsburgh wasn’t a random choice for the conference’s location. Only a month earlier, the city marked the first anniversary of the Tree of Life Congregation massacre, the wort attack on Jews in American history.A major focus of the conference was learning to stand up to and combat antisemitism, but also to learn how to identify antisemitism masqueraded as anti-Israel stances.“The zeitgeist out there [on campuses] is that in order to be progressive, you must be anti-Israel,” said Dr. Rachel Fish, founding executive director of the Foundation to Combat Antisemitism, the organization founded by New England Patriot’s owner Robert Kraft. “We’re not talking about being pro-Palestinians, because I’m pro-Palestinian, too.”Celebrated professor and author Deborah Lipstadt added that being critical of Israel is not antisemitism. “But it crosses over when you are against the existence of the state,” she said. “It’s antisemitism when there’s a myopic view that’s focused only on Israel.”Unfortunately, that is what is happening more and more frequently on campuses – an ugly phenomenon that’s traumatizing students and putting them in physical danger. Classic antisemitism has been clandestinely replaced by virulent anti-Israel activity that thinly veils the animosity and hatred toward Jews lying just below the surface.If you want to eat kosher food or decide to visit Israel, you’re in danger of being singled out, marginalized and attacked. There’s nothing kosher about that. In fact, it’s downright treif.